It was Anne’s birthday yesterday so she got to lead the pace as we departed Redondela. We took it easy and met up with a father and son who were walking together. The father has walked several Caminos since he retired and feels healthy and fit and at peace. His son said he would like to do one with him because he had a stressful job. The son has been amazed how unstressed he was now. He could barely think of work at all. The walking had also brought him closer to his father. He and Bill had a long chat about languages and other things. Irene commented on how life had become simple while doing the Camino. She felt that she was able to let thoughts go more easily and was more relaxed now too. She had started to feel sorry about finishing soon. We all said our feet and bodies get tired but we still feel better overall.

It was a beautiful walk with a few tough hills to keep us interested and give us good views but mostly we walked through forest and on dirt paths and at last alongside a stream. It was very pleasant and so much softer underfoot.plus the birds are so pretty to hear.

We are starting to see many pilgrims now that the path has merged with the Portuguese Central Way. There are many young people, some in groups, some alone. Many of the girls are travelling solo. There are couples, some oldies and some young, some who walk hand in hand which is beautiful to see. We have met many different nationalities too. I started chatting to a young guy who was with a group of young men carrying a cross. He said he was Italian and he was finding it a bit of a challenge up the hills. They were taking turns at carrying the cross. I tried my basic Italian out and he corrected me politely and we laughed and then it was Arriverderci and Buen Camino and he ran to catch his mates. One young Polish couple we spoke with tried to teach us how to say Mount Kosciuszko with the correct pronunciation. We were not great students but we had a few laughs at our attempts.

As we walked up a hill I started talking with a couple we have passed a few times this day. They were Henry and Lou from Dallas, Texas. He had just retired from running his Chinese restaurant. He was from Hong Kong and was a little surprised when I told him my husband had been from Hong Kong too. It turned out it was his birthday so he and Anne had a photo together to celebrate that coincidence. What would be the odds that you meet someone on the same Camino with the same birth date?

We crossed this old Roman bridge, the Ponte Sampaio, where there had been a major battle in the Peninsula war between Napoleon and Spain and the French were routed and ousted From Galicia.

While we were taking photographs a group of Spaniards asked us to take a photo of them at the bridge. They also asked why my husband was riding a bike. I promptly pointed to Irene and told them Bill was her husband. We explained that he had broken his foot and that this was the only way he could join us. We told them we often suggested he scout ahead to save us making the wrong turns! They laughed. The trouble is sometimes when Bill does scout ahead he is watching the road or going up a hill and can’t always see the arrows. He had that mishap yesterday and had climbed a steep hill only to find he had missed the turn off. The good side was the quick downhill to the correct turn off!

We lunched by a fountain. It never fails to amaze me the number of ancient water courses or springs that supply these fountains and still do after hundreds of years. From a country like Australia which always has issues with drought it is a miracle. 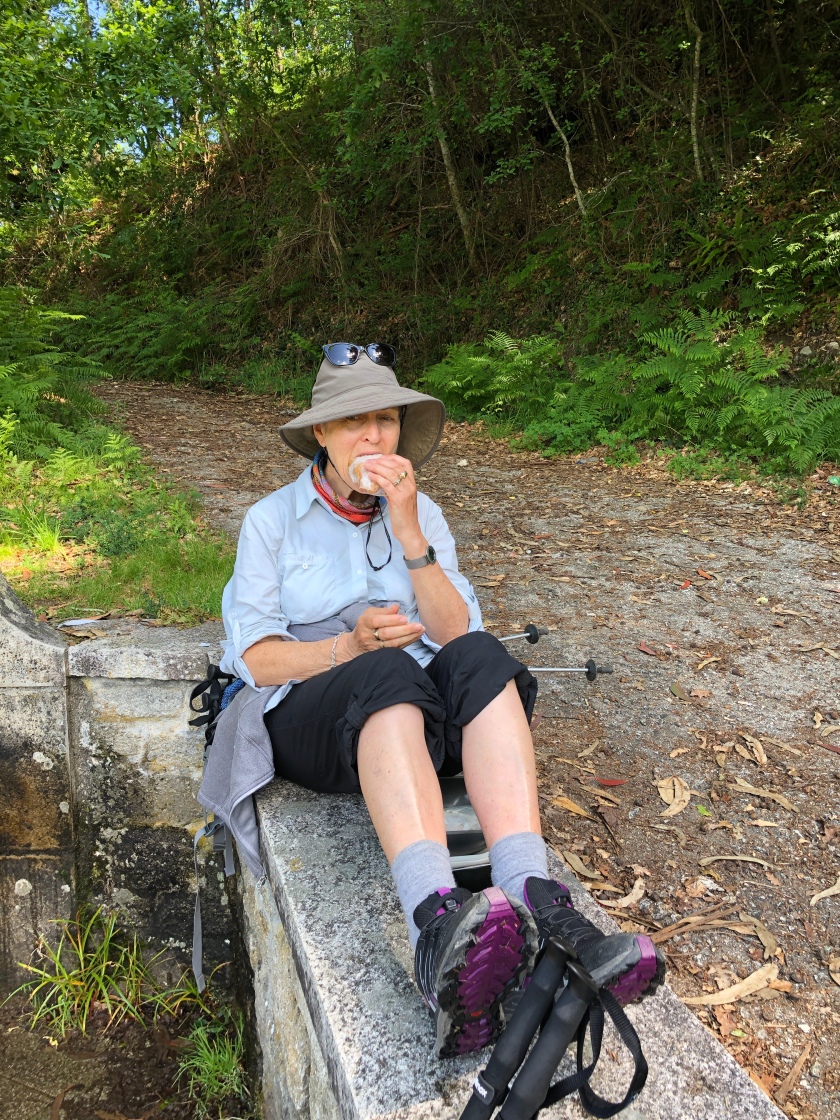 We arrived in Pontevedra and settled into our hotel. Another birthday present for Anne was a bath! She had been fantasising about a soak. Fully refreshed we were faced with the dilemma of dinner again. Because it was Anne’s birthday we wanted to go somewhere good and as it was a public holiday (May day) we were unwilling to walk to the old part of town if places were not open. What were we thinking, it’s Europe and Spain and lots of bars were open. Once we found the old town it was abuzz. Pontevedra was one of the first cities to fully pedestrianise its old city centre and has become a showcase for the world winning many awards. It has meant a preserved city but also a flourishing city centre. It has a myriad of charming plazas. This sculpture of famous Gallicians and Anne was at the first square we came across. 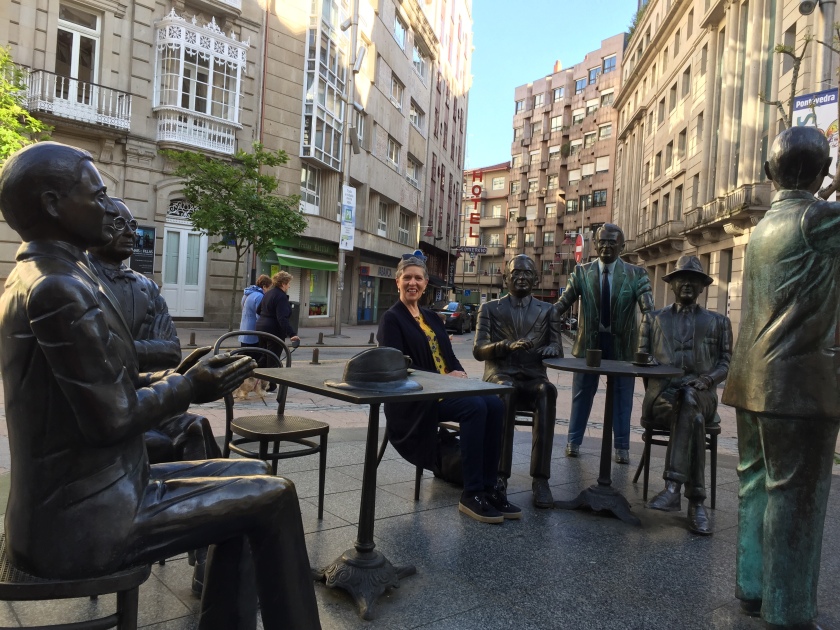 This is the famous Chapel of the Virgin Pilgrim which is shaped like a shell.

We had a recommendation for a restaurant from the guy on reception and we were searching for it when we happened on this great Tapas place with a witch on a broomstick as it’s motif. It was modern and the food was fantastic and they served Ruby Port! Another birthday treat for Anne. 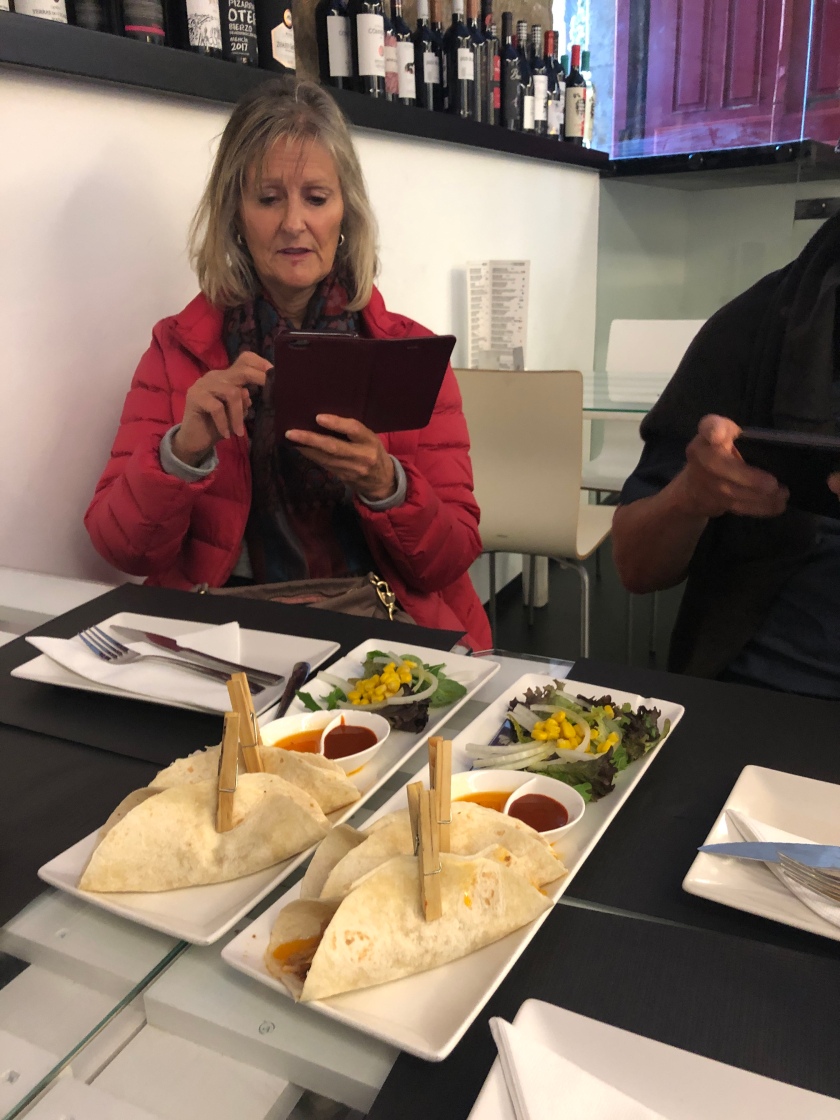 Time was moving along so we figured we could fit in another bar before the restaurant but with great delight the bar we selected was the restaurant. The sign said they feed athletes! We thought we were the correct customers then. The maître de spoke with us but said the restaurant was full. We could sit downstairs though on the high stools and we had the best shared plates. This place had a Michelin recommendation so we were thinking the credit cards might be required! While we ate their were queue out the door. 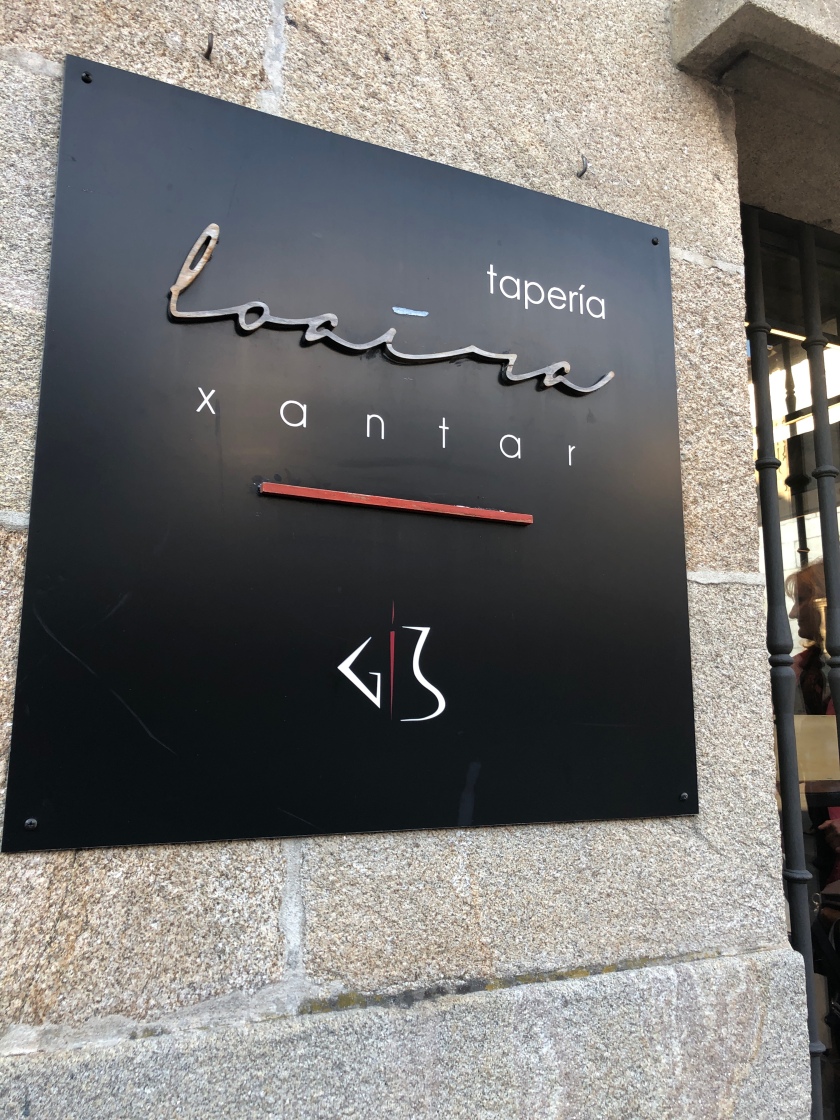 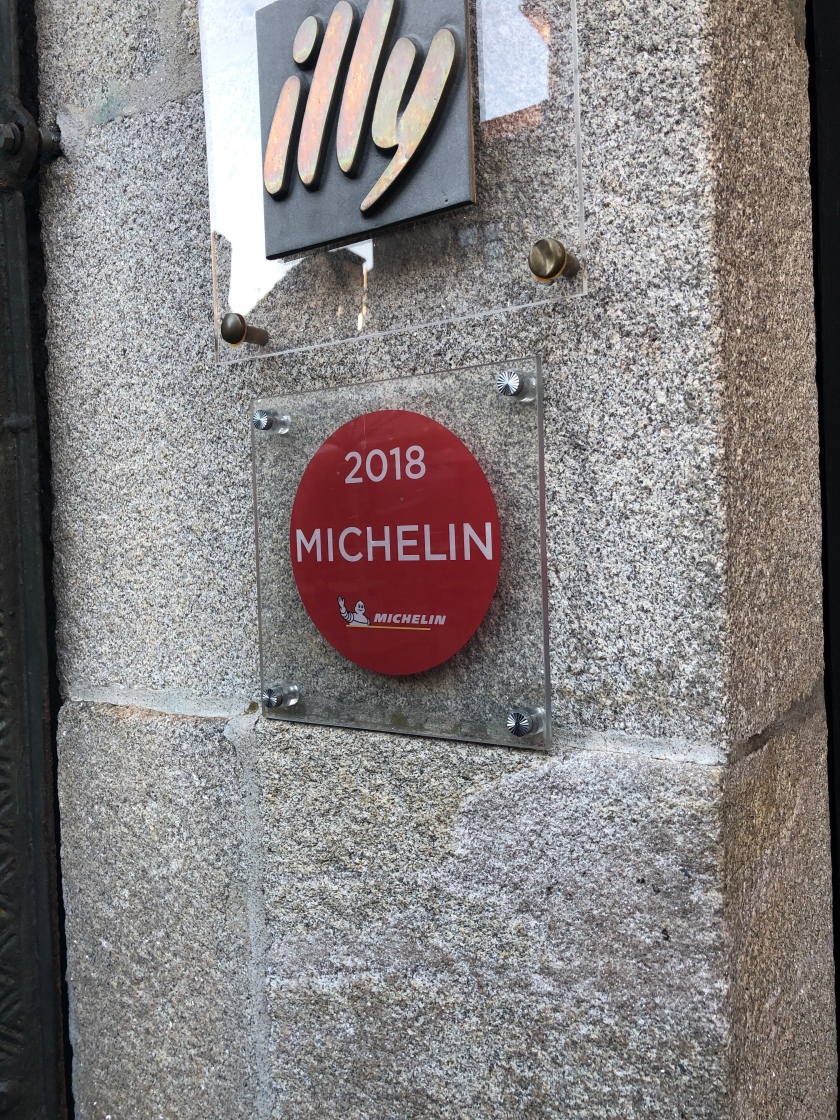 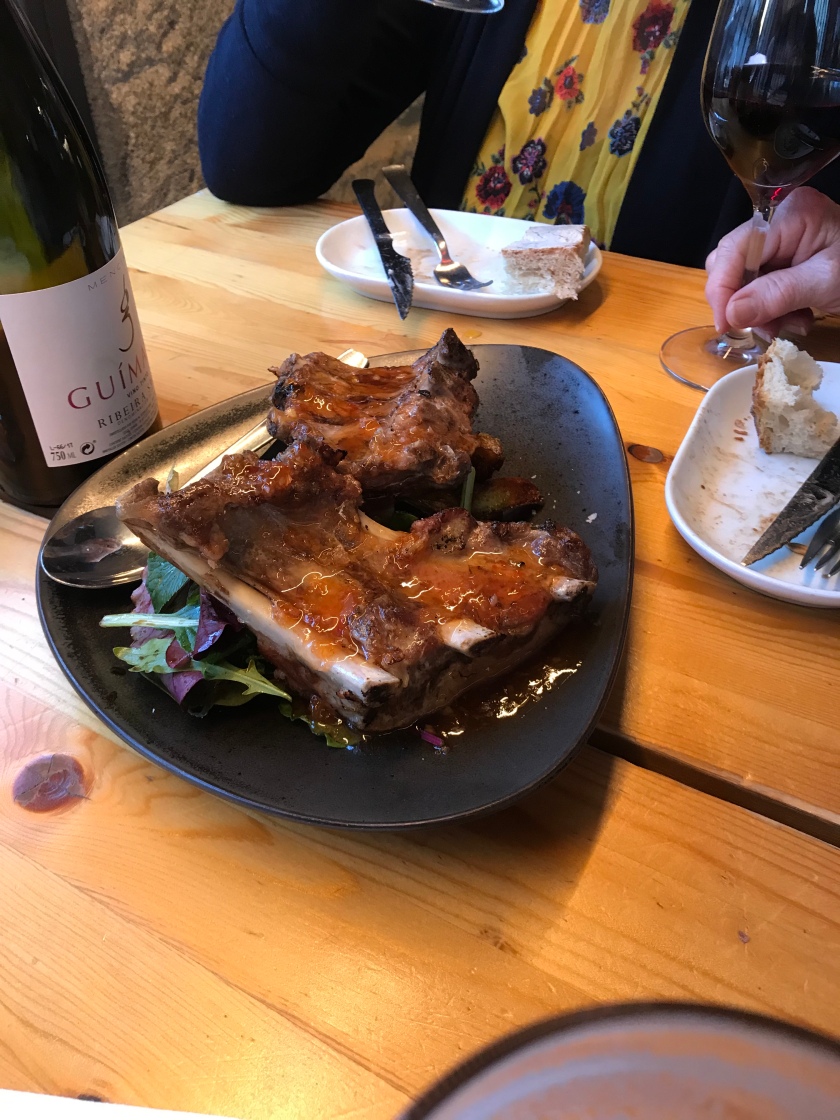 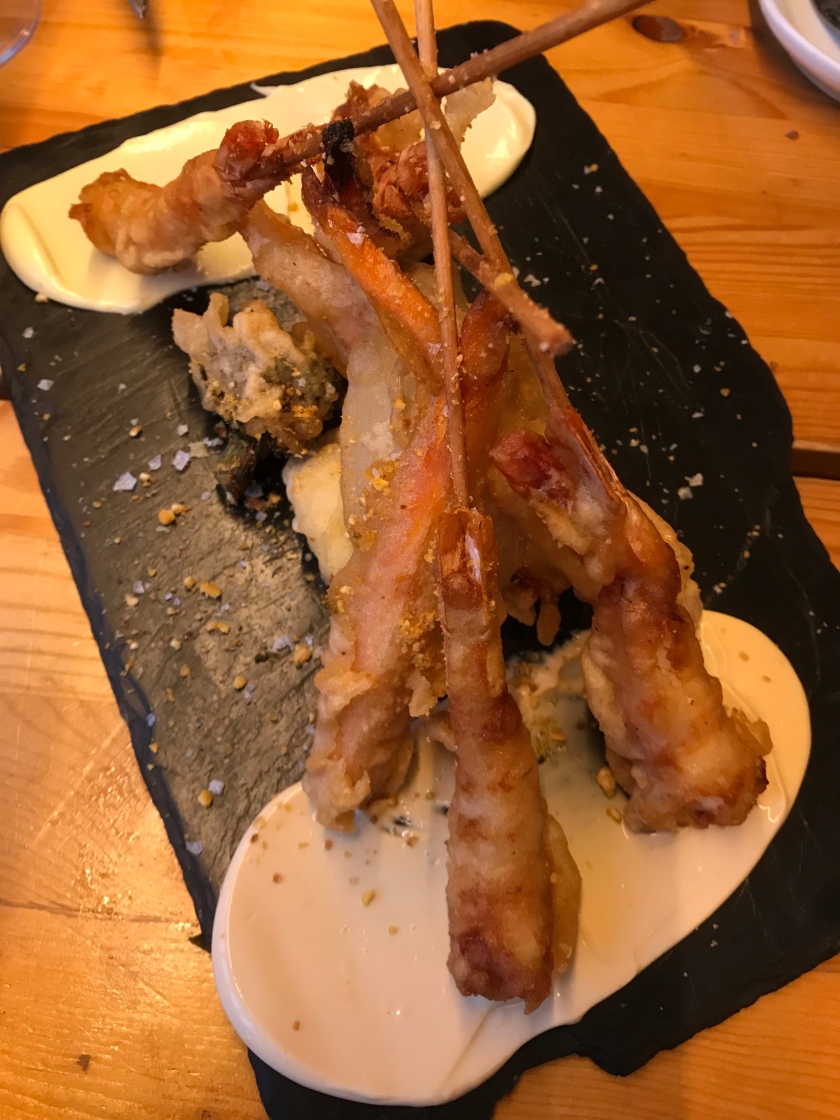 Those were the best pork ribs I have had in years and everything was gorgeous. Best of all it only cost €75 including the wine! Brilliant value, brilliant quality and a great example of modern International cooking. We were very happy pilgrims.