The walk out of Vigo was uphill as most pilgrimages are and we soon found ourselves in a road above Vigo, able to see down into the river most of the way. I keep thinking it is a harbour but it is actually the Rio Vigo estuary and it is very wide ( 7 km at its widest) and extends 35 kms north east. It is famous for boating, fishing and shell fishing. We saw lots of oyster farms or mussel farms all around the estuary. It had the most mesmerising blue, especially today because we had a perfect walking day. Blue skies and sunshine, but not more than low 20s in temperature and as well, quite a bit of forest shade too. 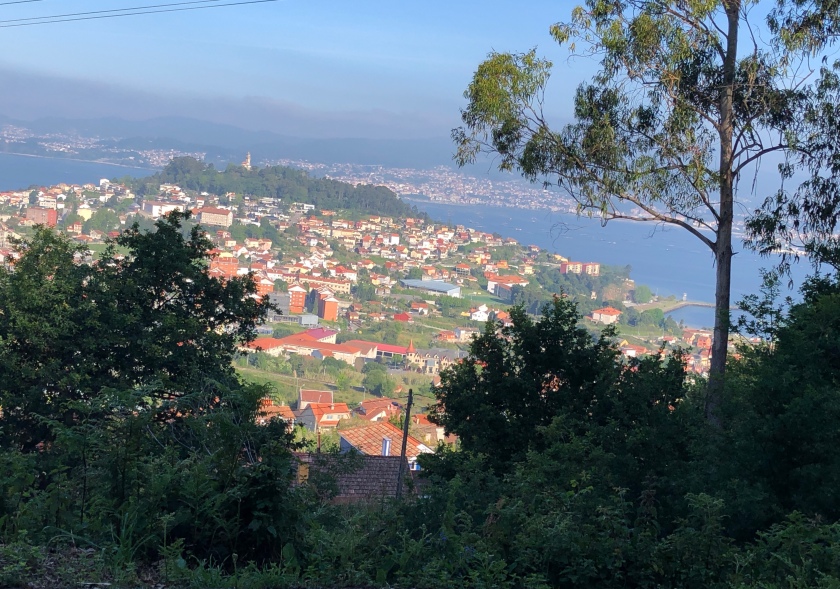 Once we left Vigo we had no coffee shops till almost the end of the walk. I saw the sign for a bar and even though it was a stiff 15 metre climb up to it, we decided to have a break. We had completely forgotten the left over tortilla from last night that I was carrying! 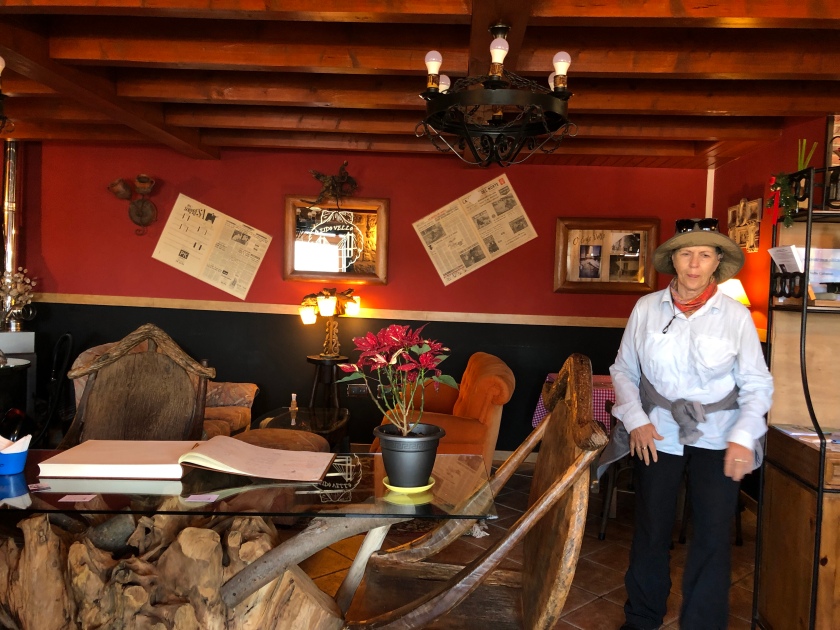 The temptation of a chai tea and dark beer chocolate cake was too much for us! It was so nice to get something different to drink (though alcohol is always nice)! Irene even had something lactos free. The young couple were very friendly and used to pilgrims and I imagine pilgrims are their main source of income. Their menu was certainly more trendy with chai and lactos and gluten free options. One pilgrim had left his water bottle on the table and the young man took after him on foot but couldn’t catch him. He said he would go later to town and try a few Albergues. He told us he had cousins in Sydney and was hoping to go in September sometime for about 6 weeks. This place had a magic view too.

We saw this very attractive bridge crossing the estuary.

The descent into Redondela was fairly brutal. Tarmac and steep the whole way. Anne was feeling her feet and hips suffering. Irene was walking strongly but seemed exhausted when we finally arrived. Going down hills is always more difficult on your knees, hips and ankles. I felt my feet getting tender and the knee I had trouble with was a bit tender too. Once on the flat all was okay. Bill had a great day with hardly any traffic and a flat ride till the end.

For the first time when we reached a town we saw lots of pilgrims and there must be at least ten or more Albergues here. We stayed in two apartments that were side by side. On arrival there was one moment of missed heartbeat when we couldn’t find 3 of the bags. They had come early and been put into a cupboard which was then overcrowded with other bags outside. Green walks had not failed us. Our apartment had a washing machine so we promptly washed and spun dry a few garments. I had to scrape a few bits of sard soap into the soap part and then we rubbed sard onto the clothes. They took a while but eventually were washed. It is always a challenge to work the washing machines. Bill has used some laundromats and the water and soap are all pre-mixed! Now that is convenient. We had a clothes horse and heater so we expected the clothes to dry fairly quickly. That is a luxury. In Albergues there is always a clothes line but apartments and hotels just don’t have those facilities so we drape in the bathroom or hang in the cupboards.

We took a wander around town and found an ice cream parlour. With ice-creams in hand we adjourned to a nearby park to relax and enjoy not walking! We were quite fascinated by a steel railway bridge that actually crosses the town in two diagonal lines at above roof height. It is quite attractive actually. I thought about the sky train at home and all the hullabaloo.

We also noticed lots of plastic bottles recycled as decorative flowers in the lanes and on the buildings. Apparently there had been a recycling festival in the town for a week. They looked remarkably attractive. 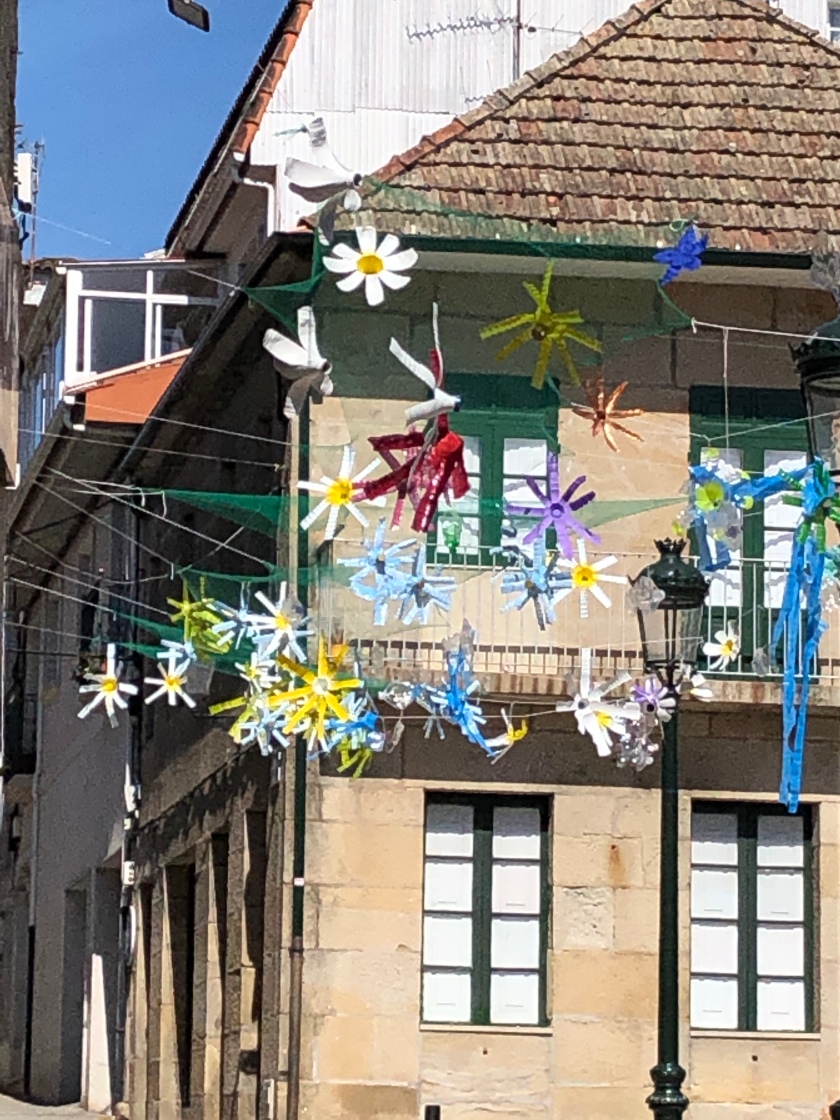 The town has a small old part with winding streets and the shopping always seems to be discreet. Not many have large windows or streets of shop after shop with big plate glass windows. They are even set back from the footpath sometimes. 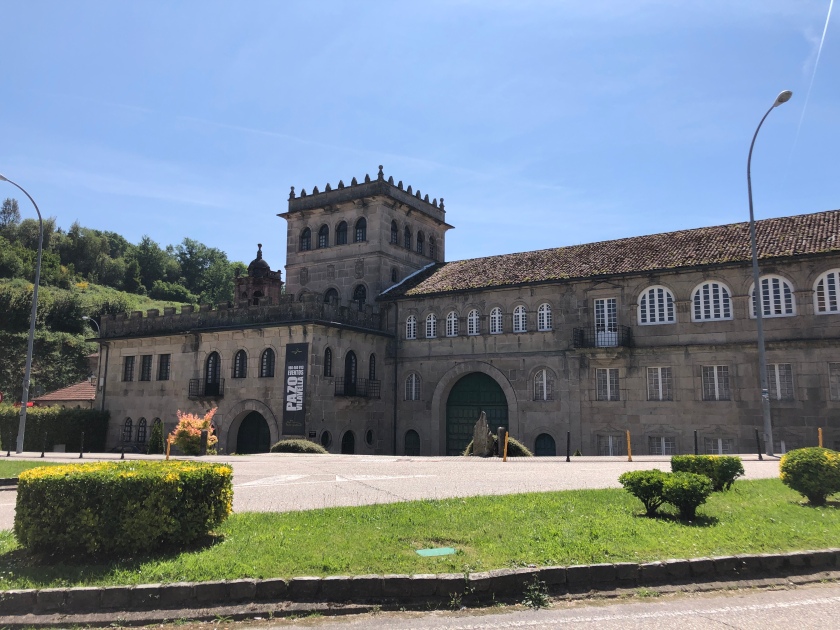 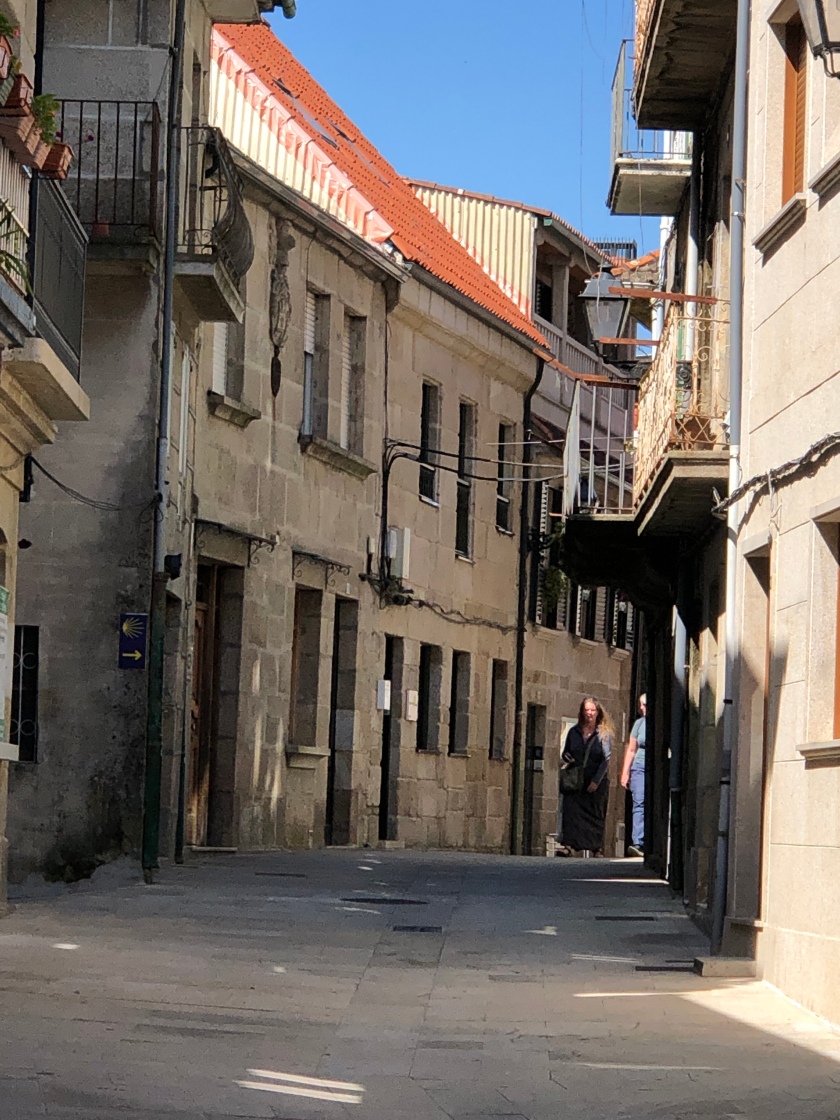 We had the usual problem of finding a place to eat early enough. Most of the bars open at 5 and restaurants about 7.30 pm if you are lucky. We stopped at a bar for a drink and were given a small plate of cheese and bread with a drizzle of olive oil as well as a bowl of sunflower seeds and a bowl of jubes. This is the custom here and it is usually complimentary. Sometimes you could eat that and have a salad and go to bed!

Everyone was quite tired and we flirted with the idea of buying food from the supermarket but the choices were not as good as we had had in Porto so we ditched that and found a cafe that was offering a €10 meal of 2 dishes, cake, drink and coffee for pilgrims. We all opted for Gazpacho which was fabulous. The peppers filled with seafood had only a mere whiff of seafood but were okay, and the cake was very nice. We had a passable glass of red and a good coffee. Not a bad meal for the price. There was certainly sufficient to satisfy us. By now we were all desperate to get back to the apartment but the town was just starting to buzz. A pilgrims lot is to eat early and sleep well, to rise early and start afresh the next day.

One thought on “Vigo to Redondela 30 th April”