After a three night respite from packing suitcases we hit the road again. Bill had to leave early because he had to ride back to our finishing point yesterday while we ladies were able to catch a taxi. We did take his backpack for him. It was quite busy but he made good time and we were only waiting about 10 minutes before he arrived. It was so misty this morning yet not cold. Bill had a great photo of the harbour as still as a mill pond.it felt a little odd to take off from the middle of our day’s distance but this has been the nature of this trip. The distances have been customised so the walking day is not too long, especially for Bill who has a damaged foot. It is a more relaxing walk and there is plenty of time to see the countryside and the towns.

We had all read our notes and wanted no repeat of yesterday’s confusion. We were determined to be vigilante about yellow arrows. We had a few discussions over interpreting the notes and Bill engaged the GPS app that is part of the kit, but which we have found very hard to use. Eventually we arrived in Vigo after a delightful walk. The sun was out and although cool initially it warmed up towards the afternoon.

This church of San Pedro de Matamá had unusual roof decorations. It was a Romanesque style inside.

At lunch time as we entered Vigo and came across the Parque de Castrelos. Here the notes were so ambiguous we all had different views. In the end after eating lunch and resuming the walk we determined that we had entered a main gate rather than the subsidiary gate and we were actually on track. A woman suggested we visit the castle that was at the top of the hill and as it was on the way we did. The castle Quinones de Leon itself was not open( it is Monday!) but the gardens were and they were beautiful. There were magnolia trees that had trunks like old gum trees! There were camélias that were equally as old and the size of trees. It was such a lovely uplifting garden. They are restoring its maze too. Apparently Marie Antoinette used to visit. This is a magnolia tree!

It even had exposed roots like Moreton bay fig trees. They are hard to see in the shadows. 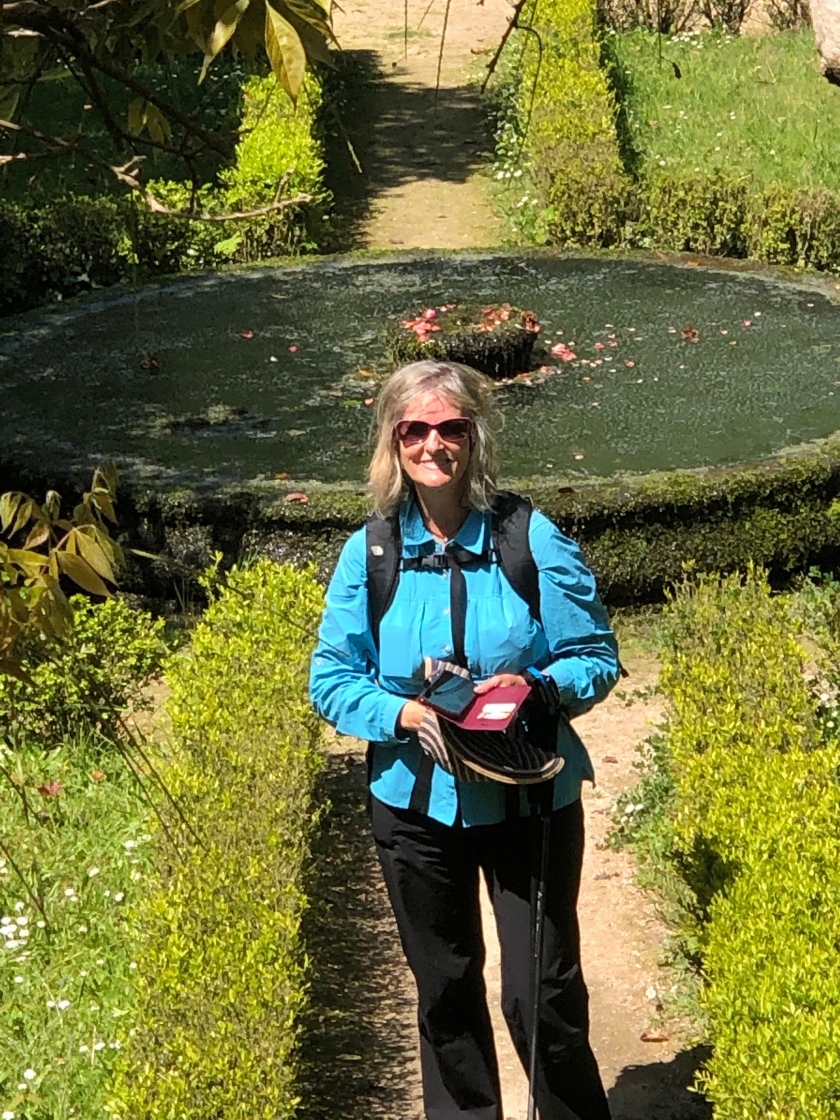 As we left the castle we saw the yellow arrows again! We followed them for a long time along a little stream not unlike the Philosopher’s Walk in Kyoto. Once again we started to climb and we then had a decision. Follow the arrows or the GPS to the hotel. We opted for the GPS as it was closer by that route and it was warmer now.

When we arrived at our hotel after a bit of Discussion about the best way to cross the four lane road, the manager at reception kept putting the incorrect passports with Bill ‘s! Irene had to say eventually she and Bill had the matrimonial and Anne and I had the share. He just couldn’t get the passports sorted. Not very inspiring and an uninspiring Camino stamp too! When we collected our luggage Anne’s Green walks tag had fallen off and I thought she had lost it so I asked for a photocopy of mine to attach to her bag. He was very quick to do that so that was reassuring. Then when we moved Anne’s bag it had fallen on the floor underneath so we were relieved. The luggage shifting has been excellent. Always there on our arrival.

Bill has walked a lot today and scouted ahead. He has earned his big beer again.

Anne had good news from Sophie this morning. She didn’t need to have the operation to drain the cysts that have contributed to her serious illness. They seem to be draining of their own accord. It seems that very very gradually she is getting better. It is such a relief. We continue to light candles for her wherever we can.

One of the creatures I have met along the way was a very friendly donkey. He just loved having his ears scratched..

We had a budget meal tonight in a cafe because no other places were open. It was a very generous amount of tapas and not great wine. We have tasted better but the willingness of the waitress and the cheap cost compensated. Today we only spent €15 per person.

We are not in the old part of town here in Vigo so it is hard to see its charm. It seems more like a working city. It is one of the largest provincial towns in Spain that is not a Capital of a region. There was this quite arresting statue in the centre of a roundabout as we walked out for dinner. The sculpture is of five horses ascending on a waterfall driven by an intrinsic energy. The sculptor Juan Oliviera is renowned for his horse sculptures and is known as “The Lord of the horses”.

For the first time we had internet and energy to play the Age weekend quizzes after dinner. Now that is an improvement in stamina.