We were all excited about arriving in Petra. Our hotel was called the Petra guest House and it had a Cave Bar into which we all ventured after dinner. Kathy Harrington was celebrating her 36th wedding anniversary and her husband had organised with her friend Julie, Anne’s sister, to have a bottle of Champagne to celebrate. 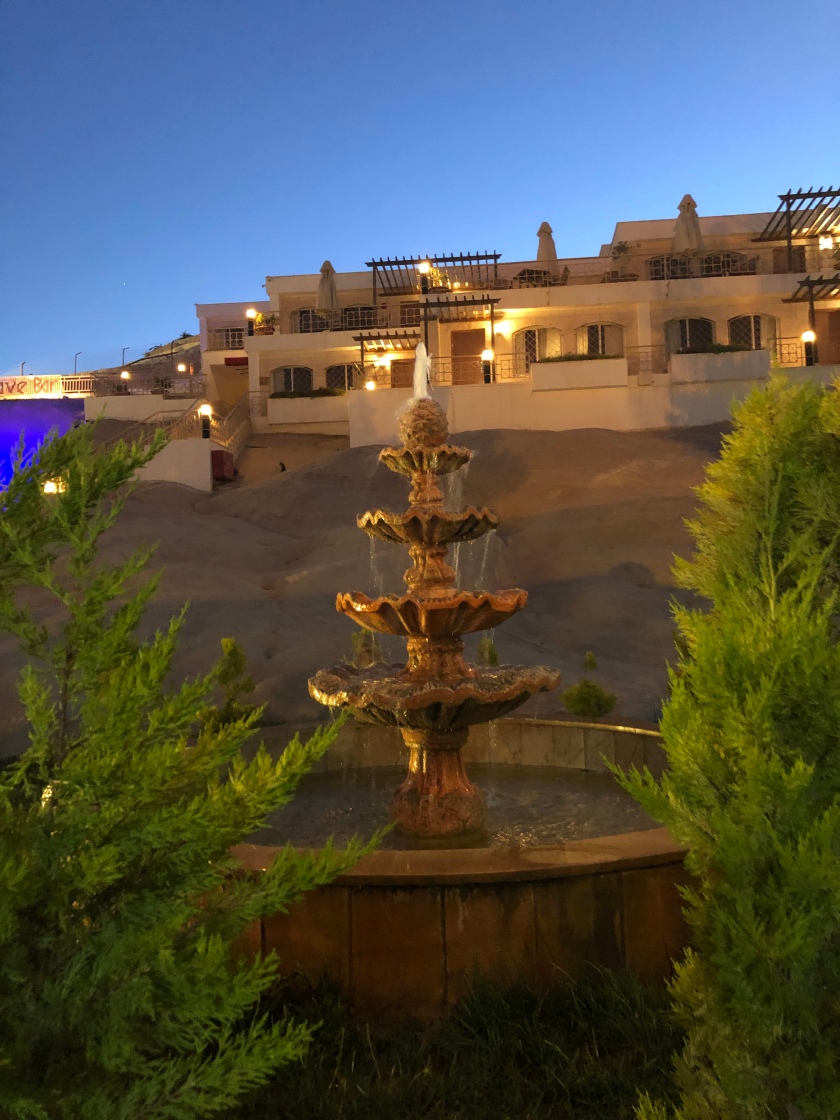 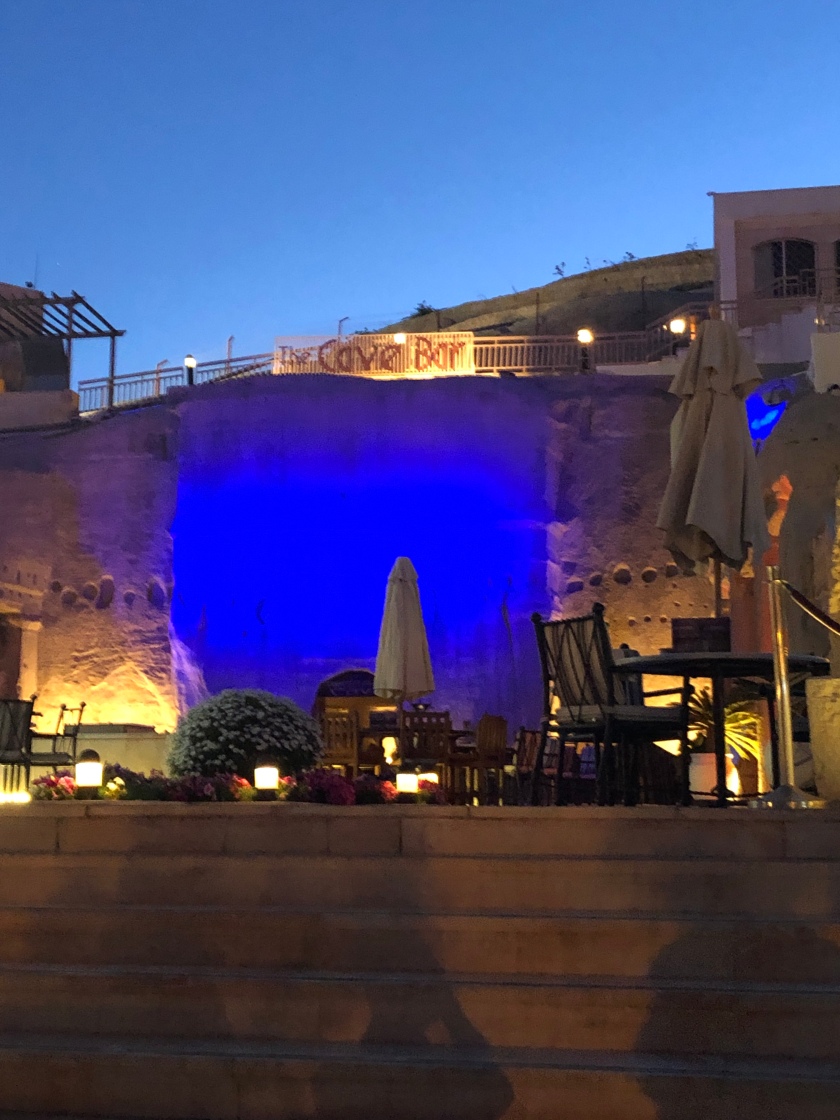 On the way we had stopped for a break at a cafe with tourist (trap) shop like Aladdin’s Cave. The jewellery was fantastic and all the women were abuzz. Kathy H was particularly taken with a square ring of Zultanite, which changed colours in different light. The stone was surrounded by diamantés. It was gorgeous and she bought it for her present. I was particularly taken by the adventurine and silver. The stone is navy blue with mica flecks which makes it sparkle. It was supposed to be good for your health too. So we were celebrating the anniversary with the ring and Champagne and went to the bar after 8.30 when the Ramadan fast was broken and we were able to buy alcohol. Though they proudly produced champagne it was only just cold and Anne, who doesn’t like plain champagne asked for a Champagne cocktail instead. She was horrified when the bartender offered her grenadine and red bull in her champagne! In the end she suggested how to make a champagne cocktail with sugar, brandy and fresh fruit. We resorted to adding ice to it too! It was a good night.

Next morning we set off for Petra which involved a steady descent of about two kilometres through the Siq, the narrow gorge before opening into Petra. The Siq itself is impressive and busy with people, horses and carts dashing down the path and donkeys or horses offered as alternatives to walking. When we arrived at the Treaury, the jewel of Petra, we were suitably impressed. It is hard to believe people would choose to live here but they did for at least 10,000 years and from as early as the 1st Century BC were ruled by the Nabataeans. 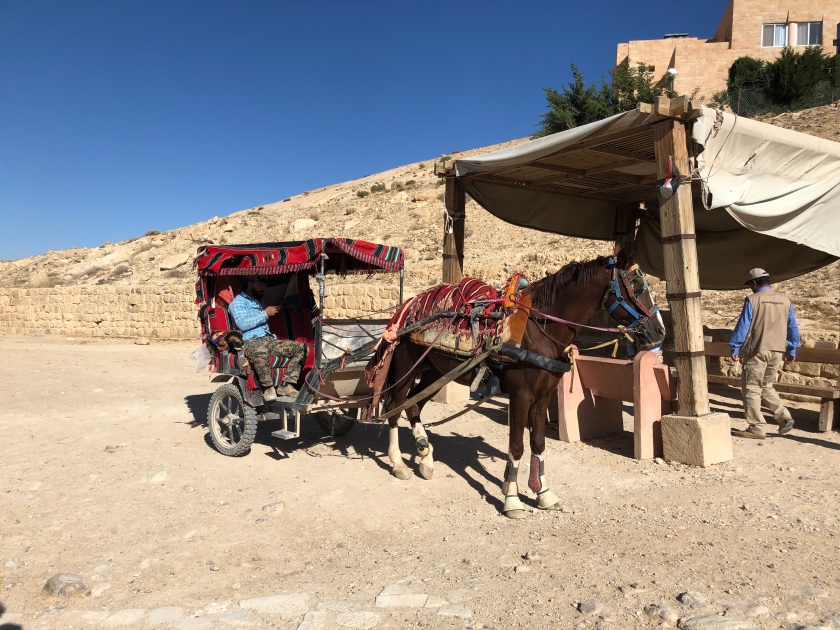 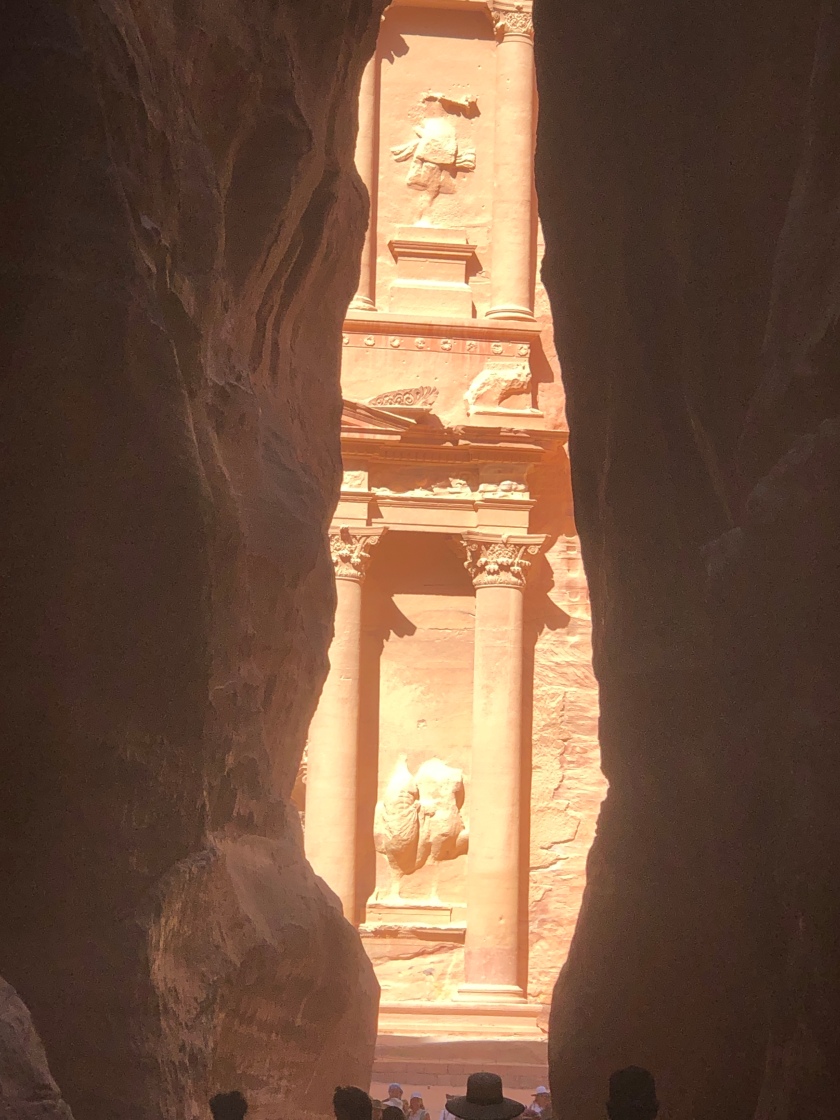 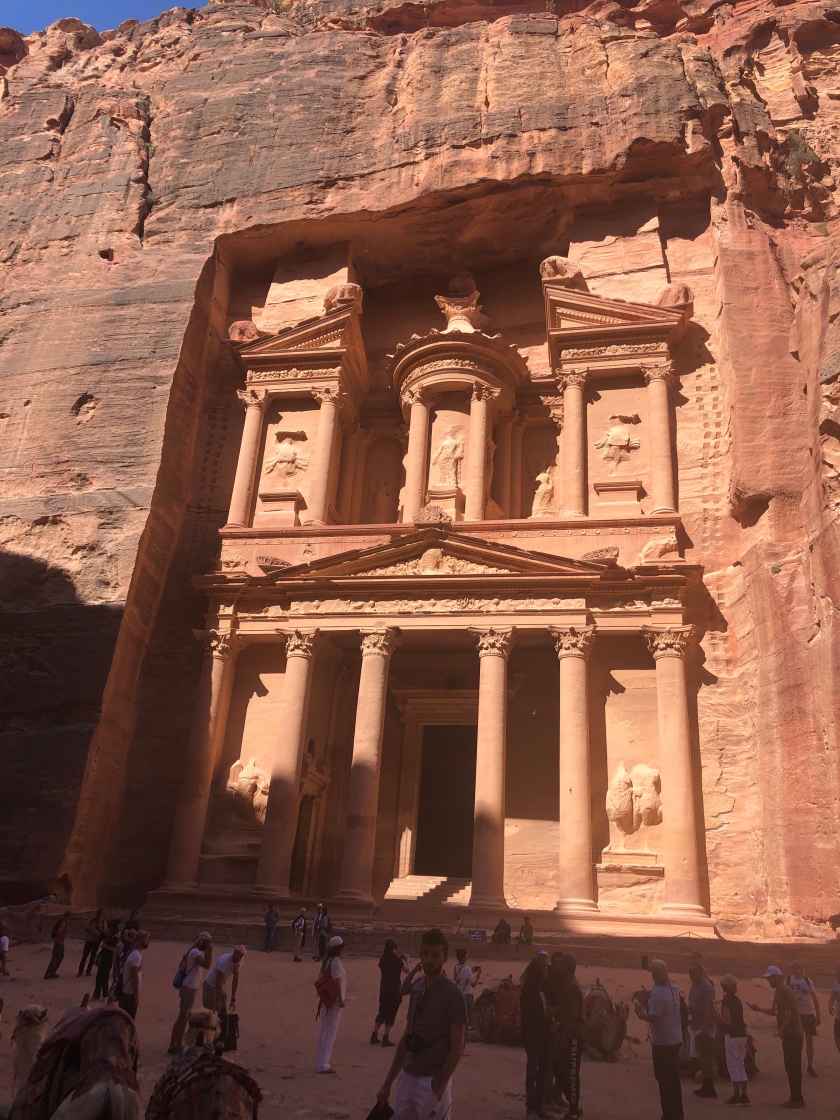 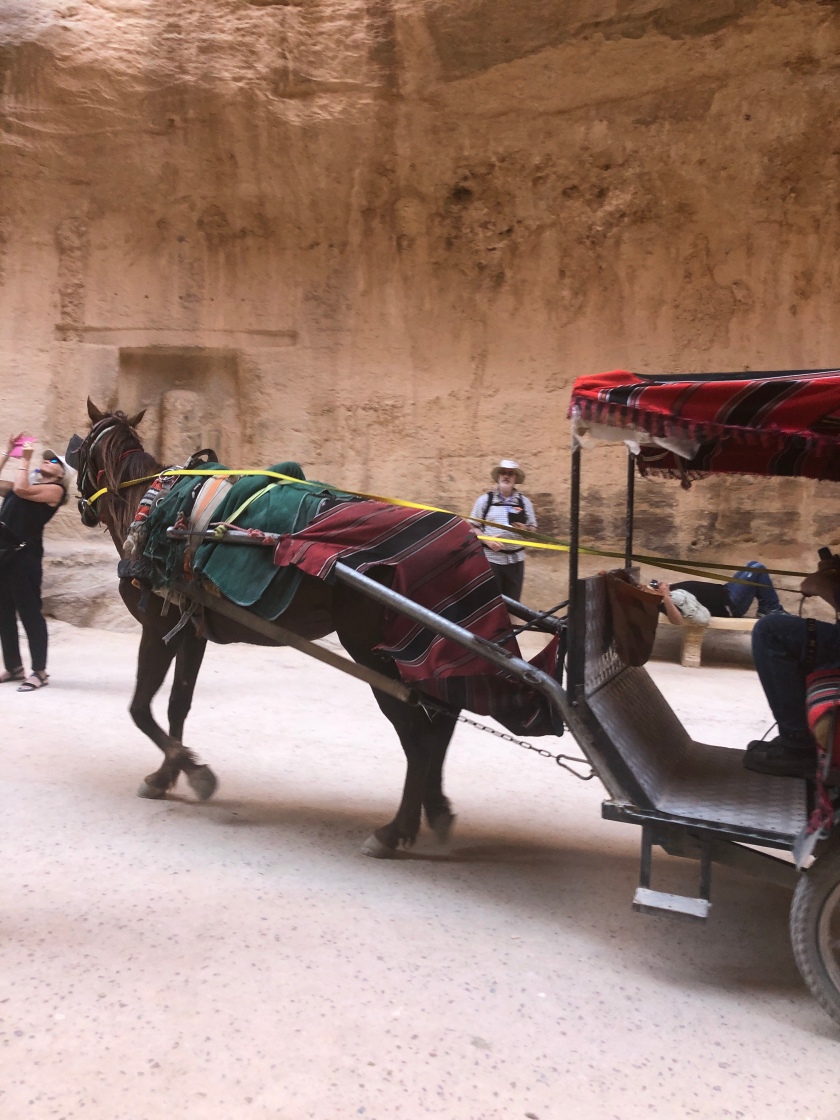 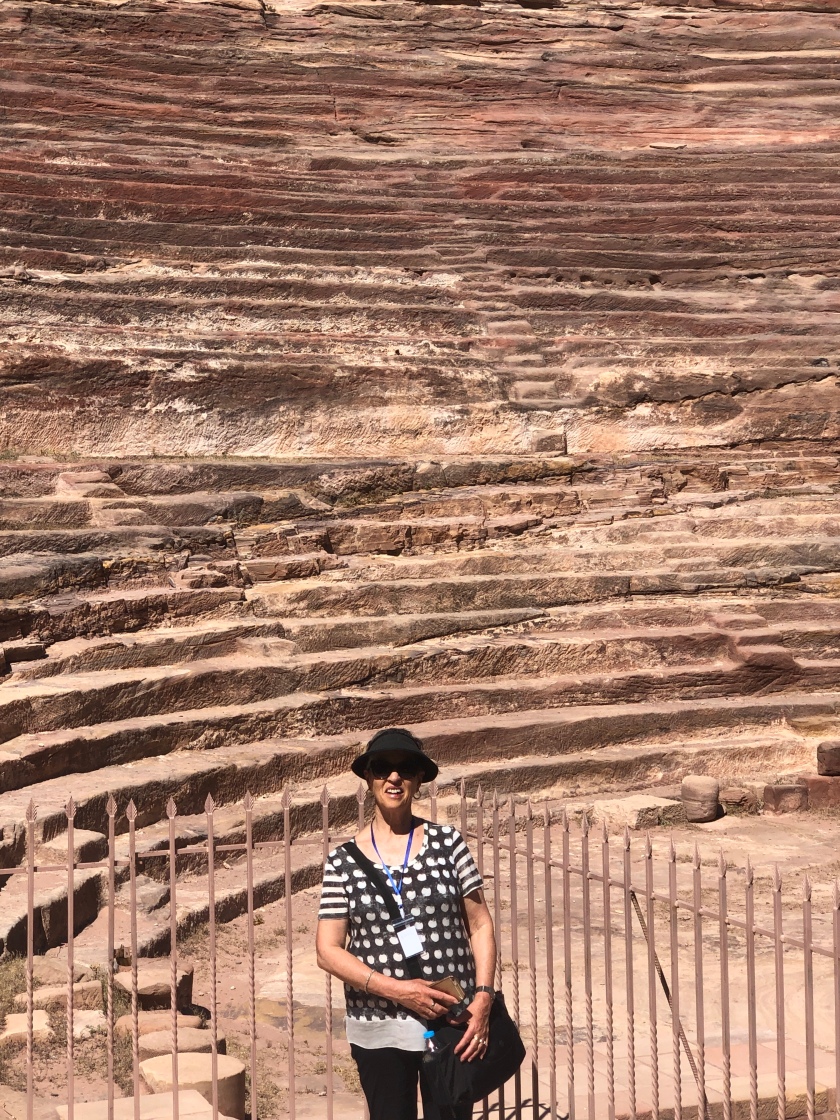 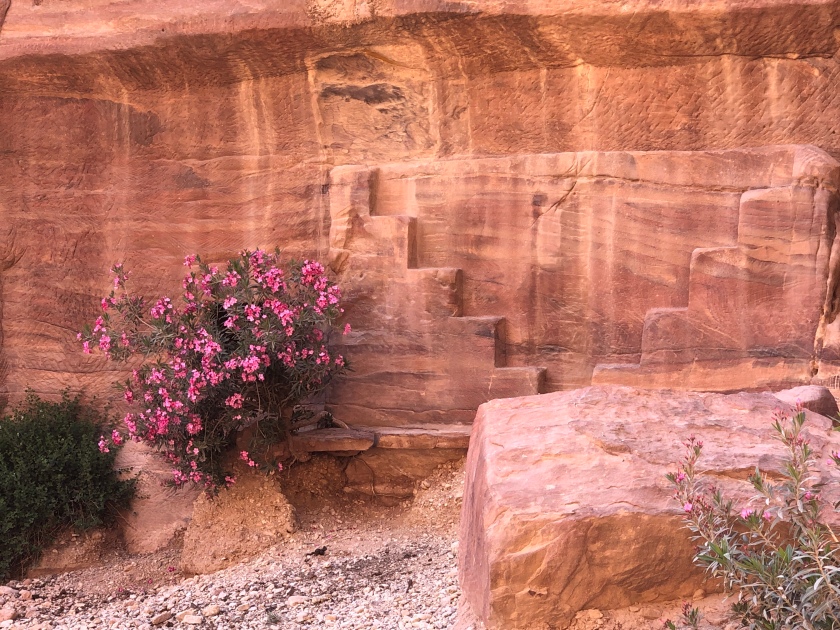 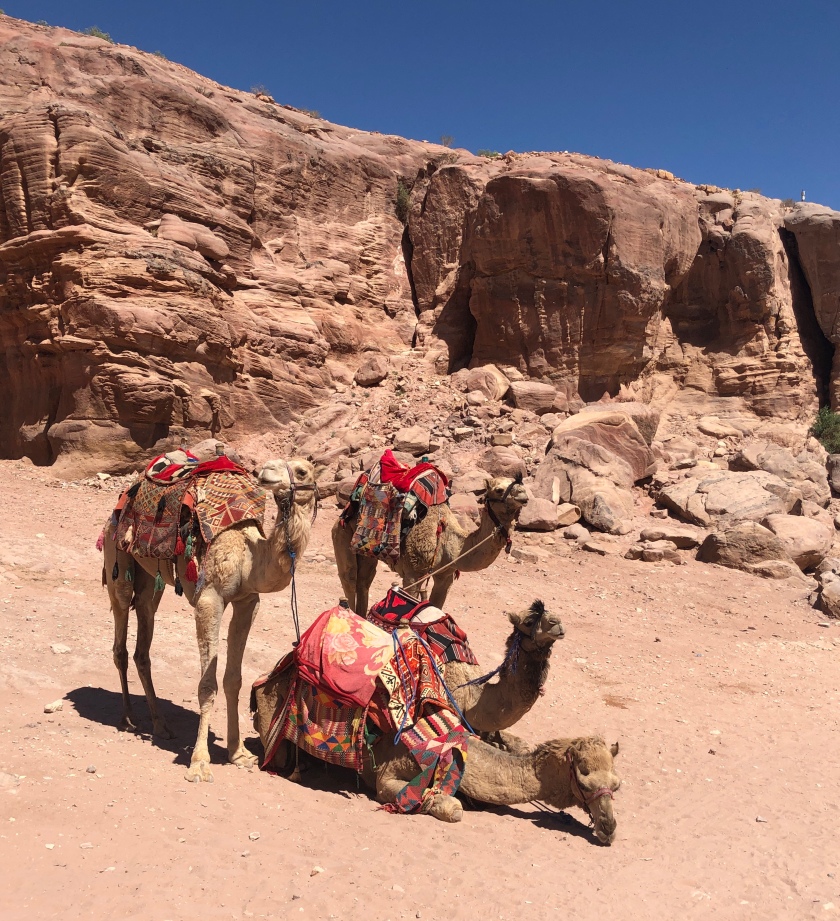 Petra was central to the trade routes for Frankincense, Myrrh and Spices. They were ingenious with water collection and management, running aqueducts along the walls of the gorge and building dams to collect water runoff. It prospered under the Nabataean Empire and the Roman’s until an earthquake destroyed it in the 4 th century and by the 7 th century it had been abandoned. It was rediscovered in 1812 by a Swiss explorer.

We explored down to the Roman theatre and up to the Royal Tombs but we were getting hungry so we returned to the hotel where our bus was waiting to take us to lunch and then on to Wadi Rum. It was a good drive through arid country and small farms where people had tapped into the ground for water. We were amazed that so much land was not cultivated because they can’t access water. Digging wells is very expensive apparently.

Before we arrived at the desert camp we had a 4WD drive tour through the canyons of Wadi Rum. The mountains were fantastic, dramatic and rugged. It was great fun sitting in the back of a Toyota Ute with a canopy scooting over the sand. We stopped to climb a sand hill to a small mountain which gave a great view over the area. We went into a bedouin camp for afternoon tea where we were served a delicious black tea scented with cardoman and sage. 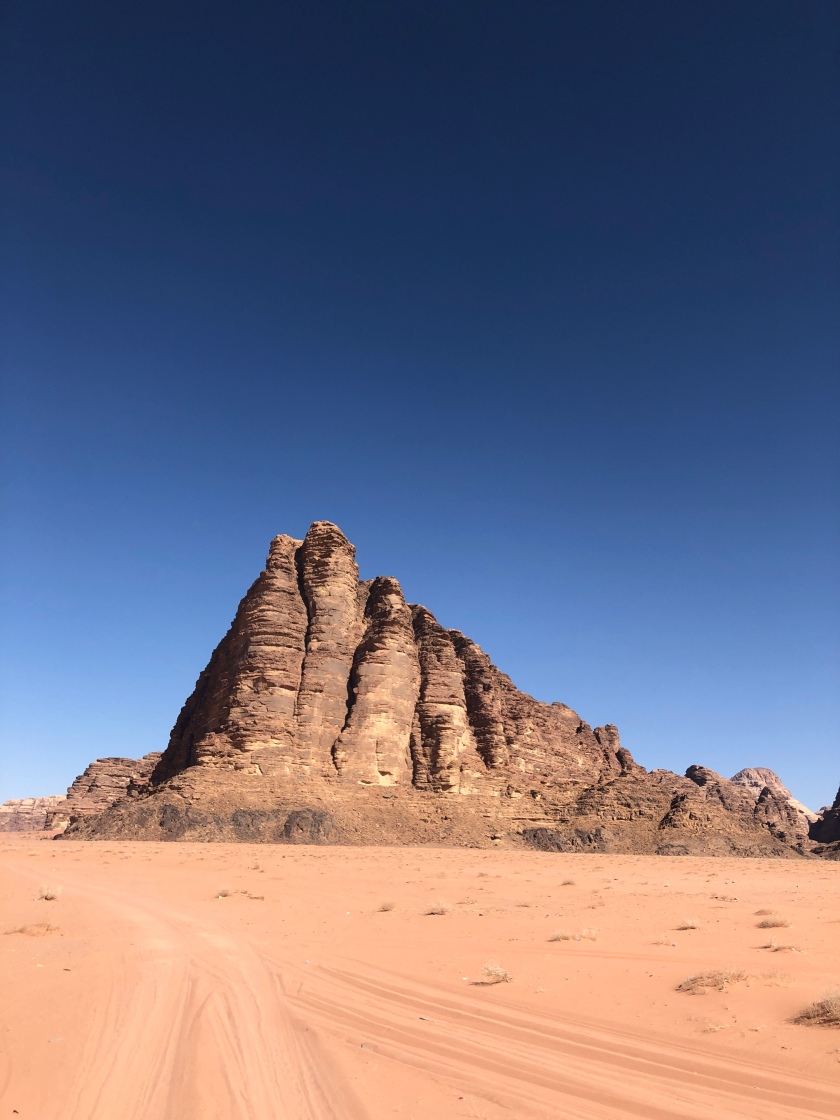 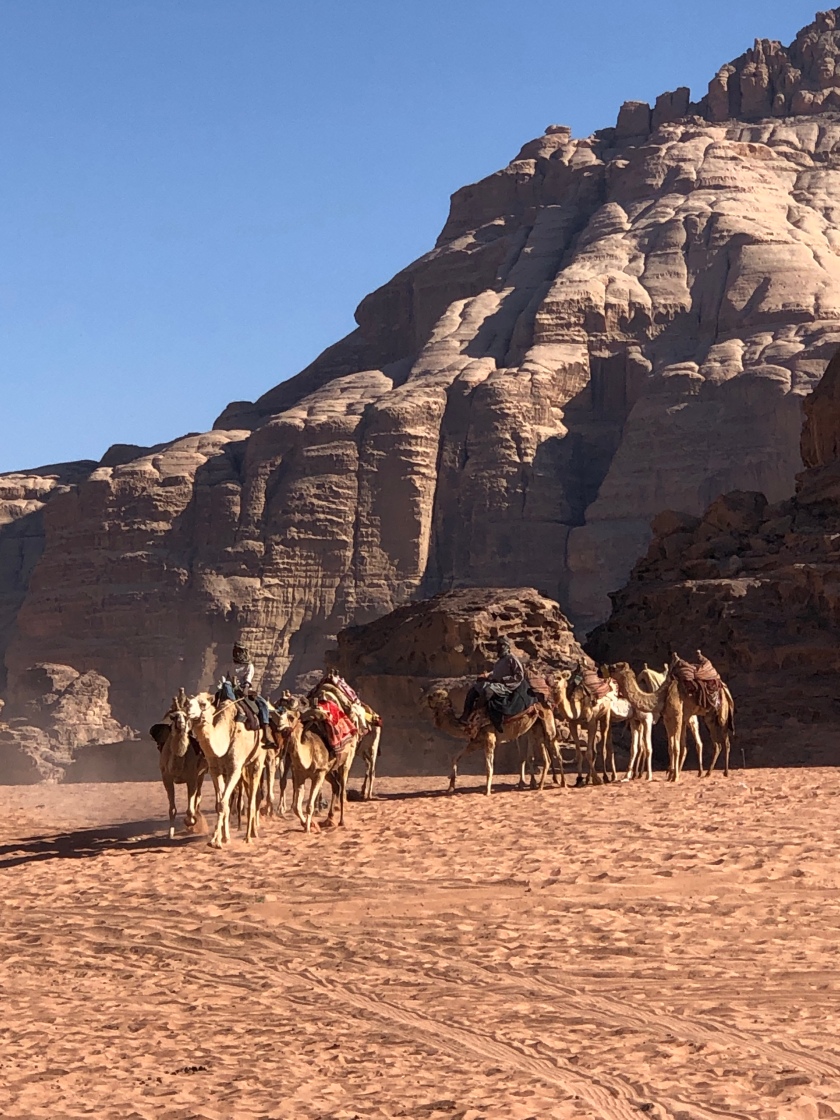 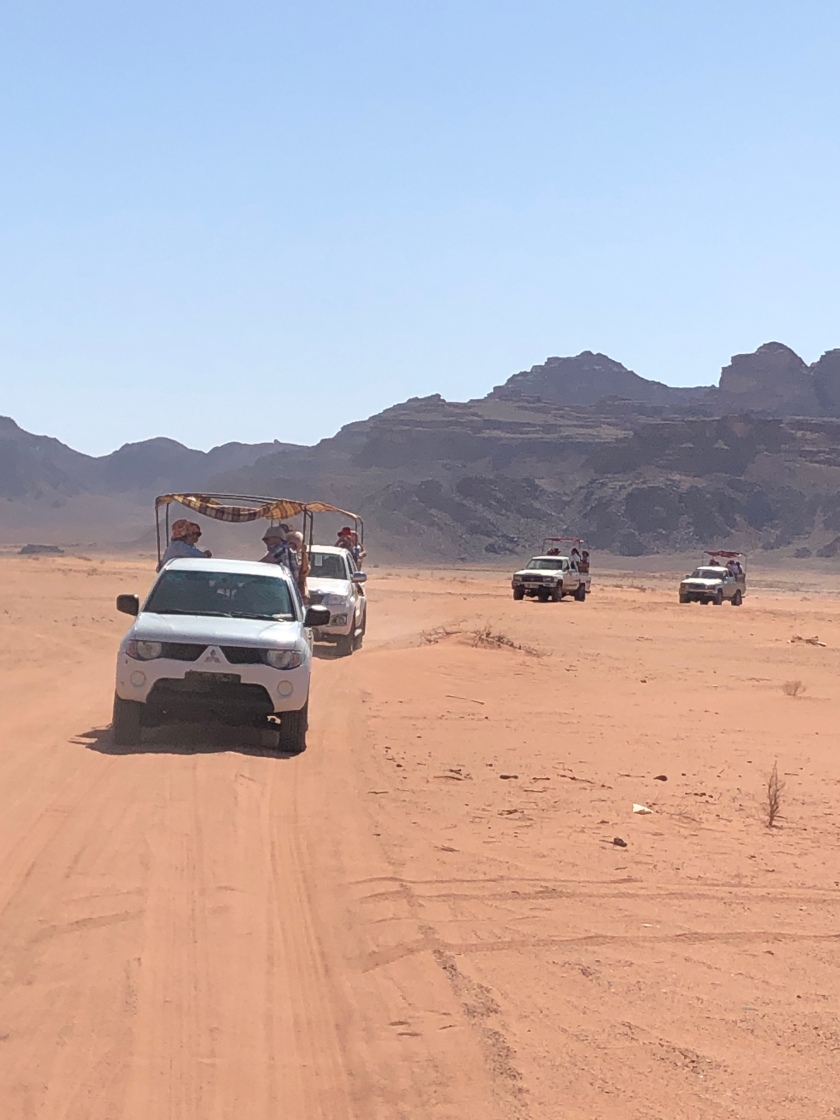 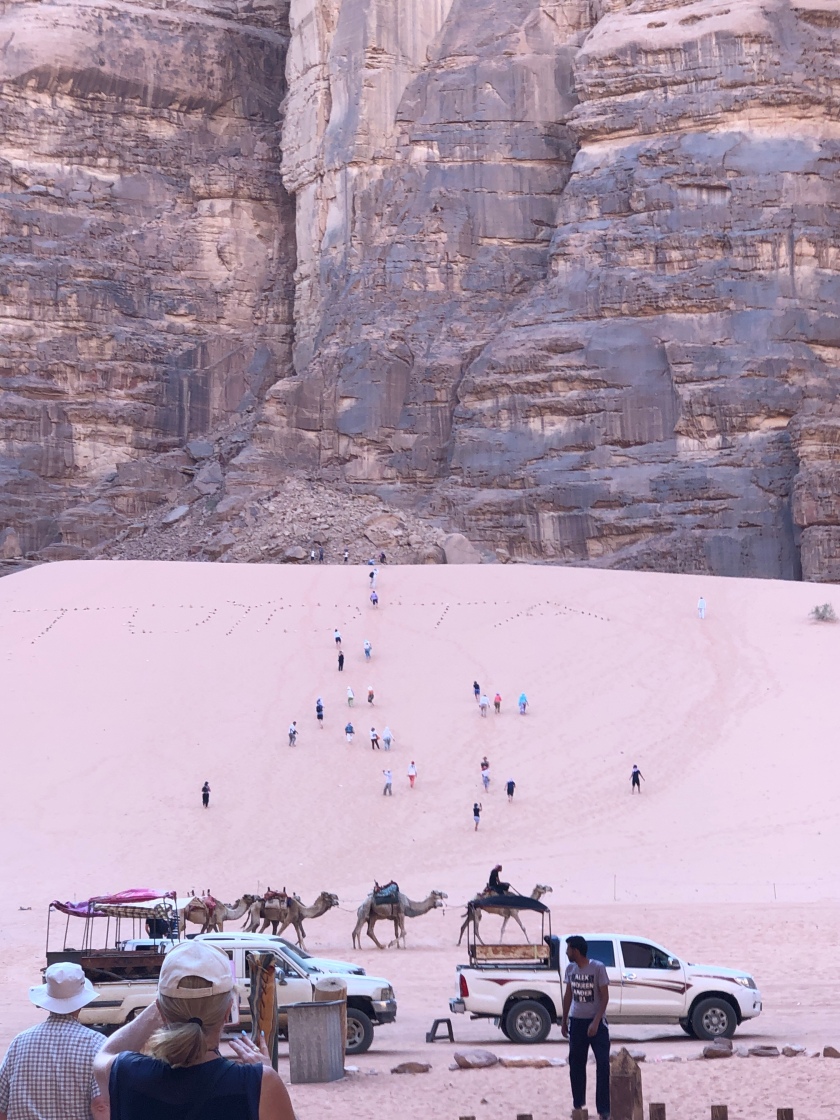 After two hours we were driven to our desert camp. It was a dry camp so Kathy and I resorted to non-alcoholic beer before dinner. The food was good but nowhere near the standard we had in Morocco. They did a roast lamb though in a pit which was so succulent and tasty. The camp was shared with many other tourists and had been the set for the movie the Martian. They offered stargazing but we thought we were too tired to enjoy it. 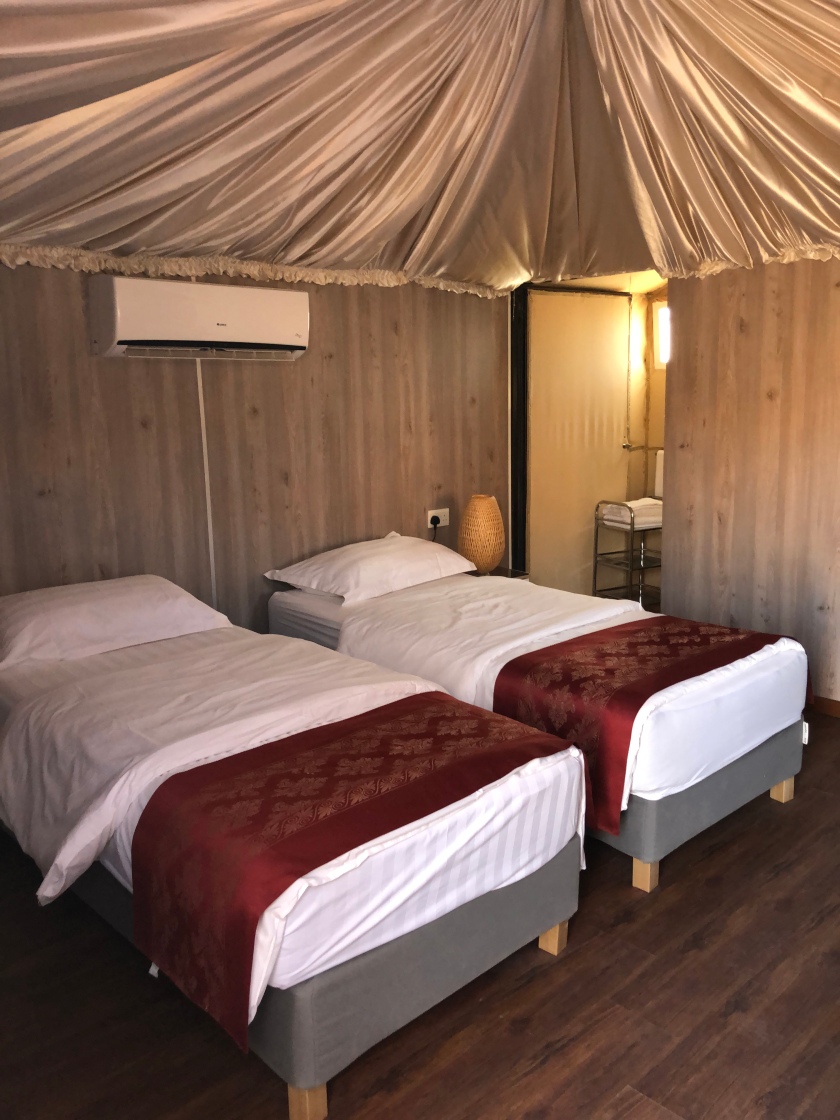 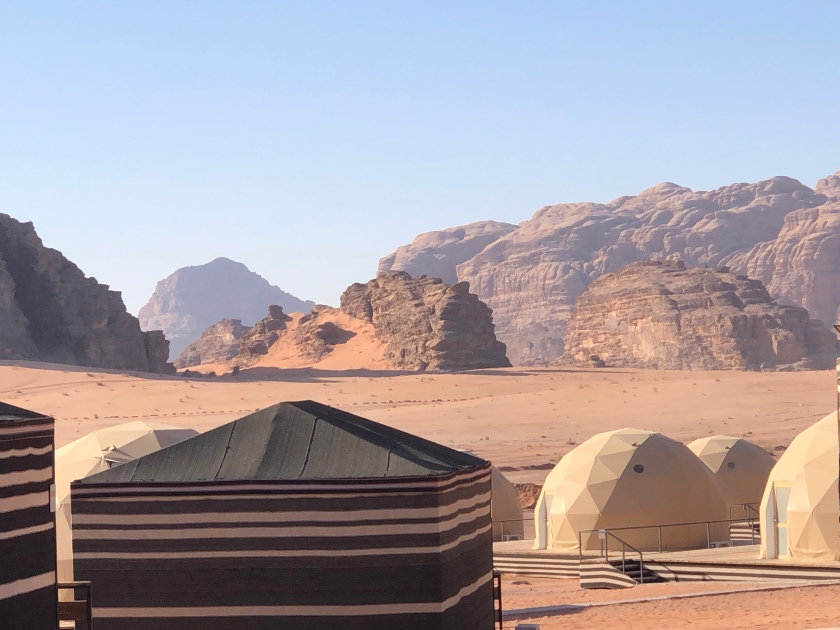 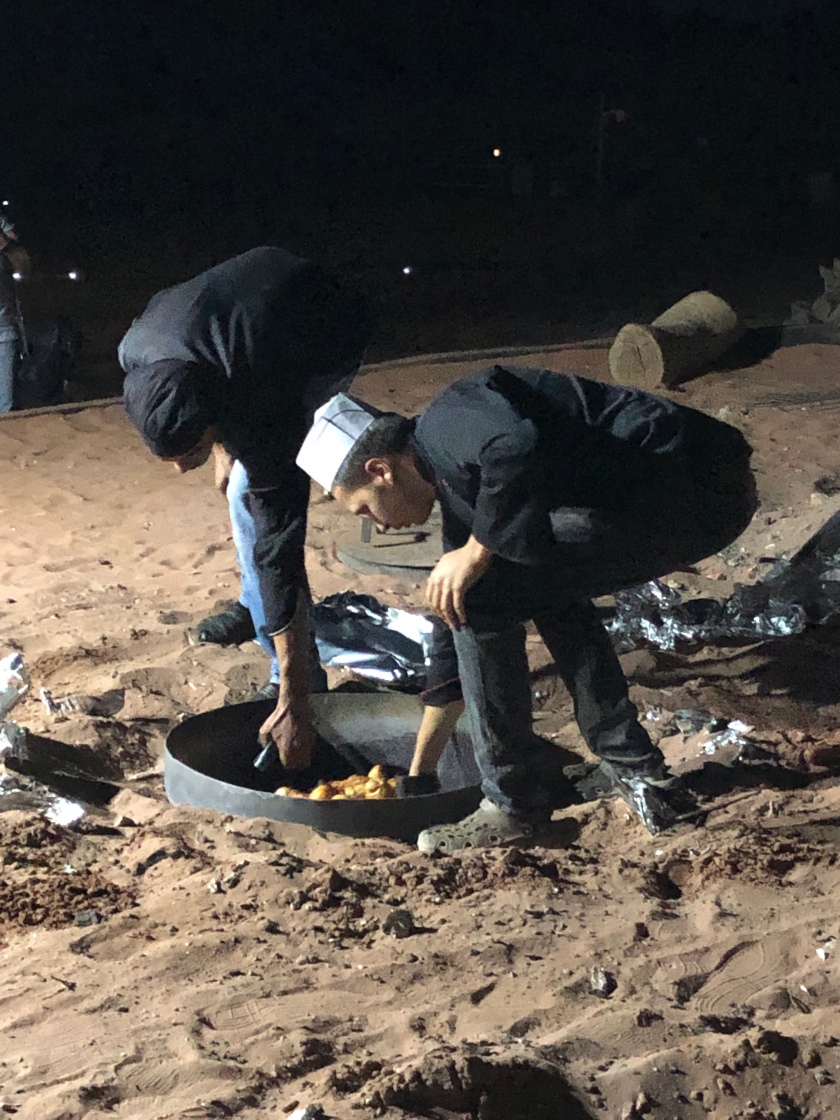 Wadi Rum reminded me of the Kimberley’s. The rock formations were so impressive and majestic. I was mesmerised by the light and shadows and the quiet.