We started the ritual of checking our bags were down from the rooms and identifying our bags to go onto the bus. This is the standard routine before we leave every morning. We usually have a session of morning prayers after breakfast as well. The mornings are busy so we can’t dawdle.

Our first destination today was Mount Nebo which is believed to be the place where Moses was buried and the most revered holy site in Jordan. You could see from the top the Jordan River Valley, the Dead Sea, Jericho and Jerusalem (on a clear day!). It was a place of pilgrimage for early Christians who would come from Jerusalem and a church has stood here since the 4 th century to mark the place of Moses’s death. 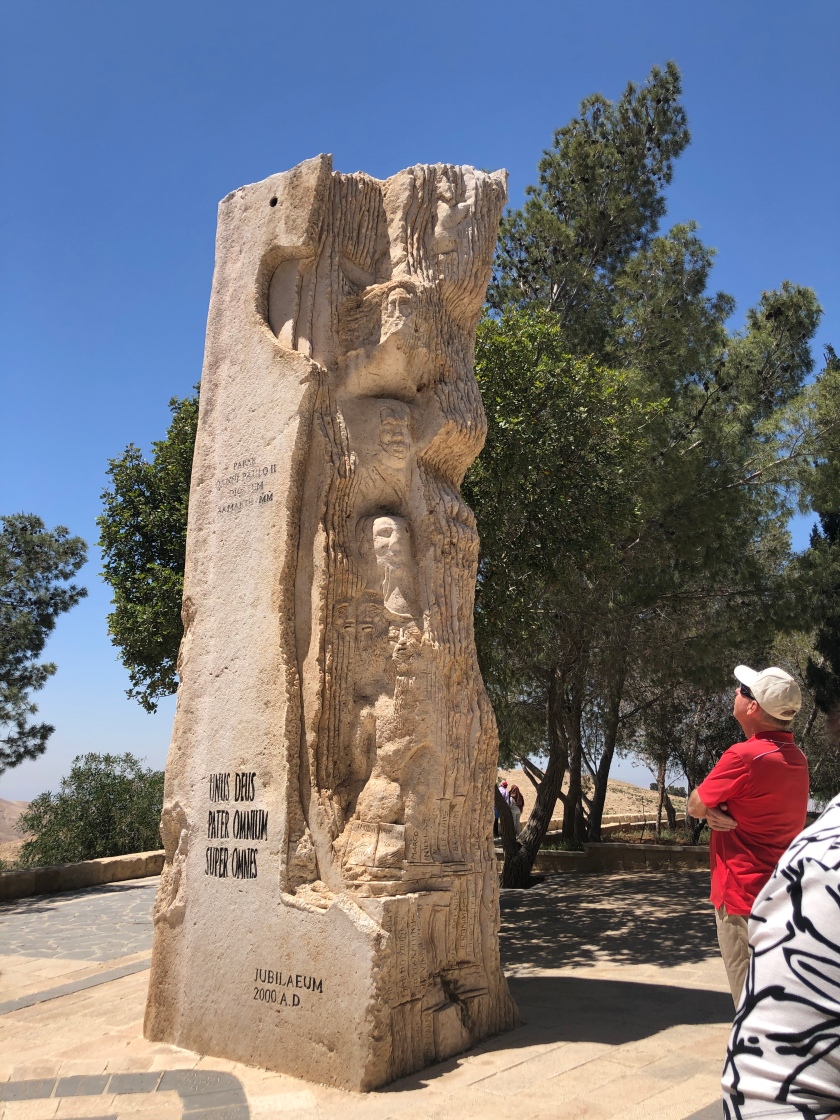 There was a fabulous sculpture of the Bible at the entrance with the words ‘One God, Father of all, Above All’ written at the bottom. It seemed incredible to be standing where Moses stood, surveying this panorama. The heat makes it so hazy it is hard to see clearly but I wondered if it had been a lush valley or like it is now, arid and sparse of vegetation.

From here we went to visit the site on the Jordan river where it is believed that John the Baptist baptised Jesus. It was supposed to be one way Jesus could show his empathy with humanity. There are archeological diggings that revealed a number of churches had been built here on stilts above the ground to survive the periodic floods. 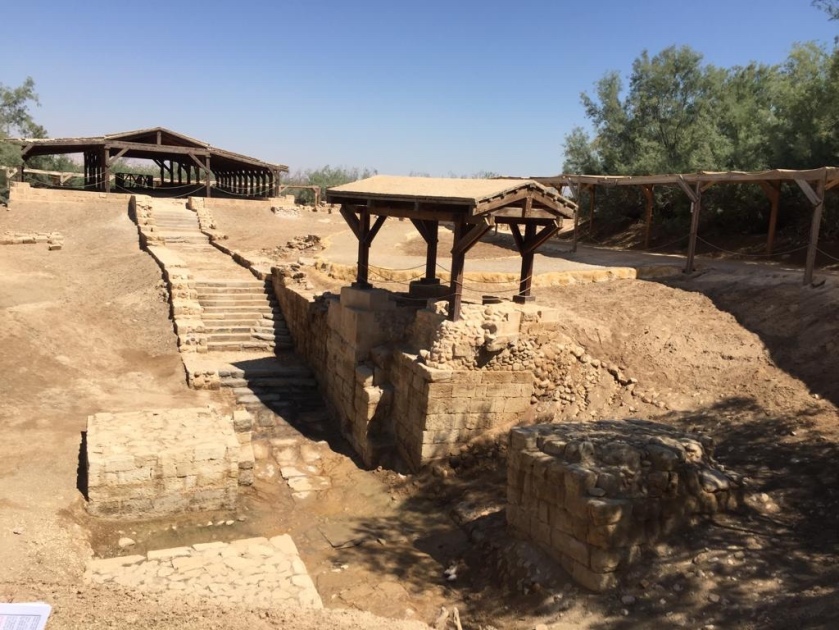 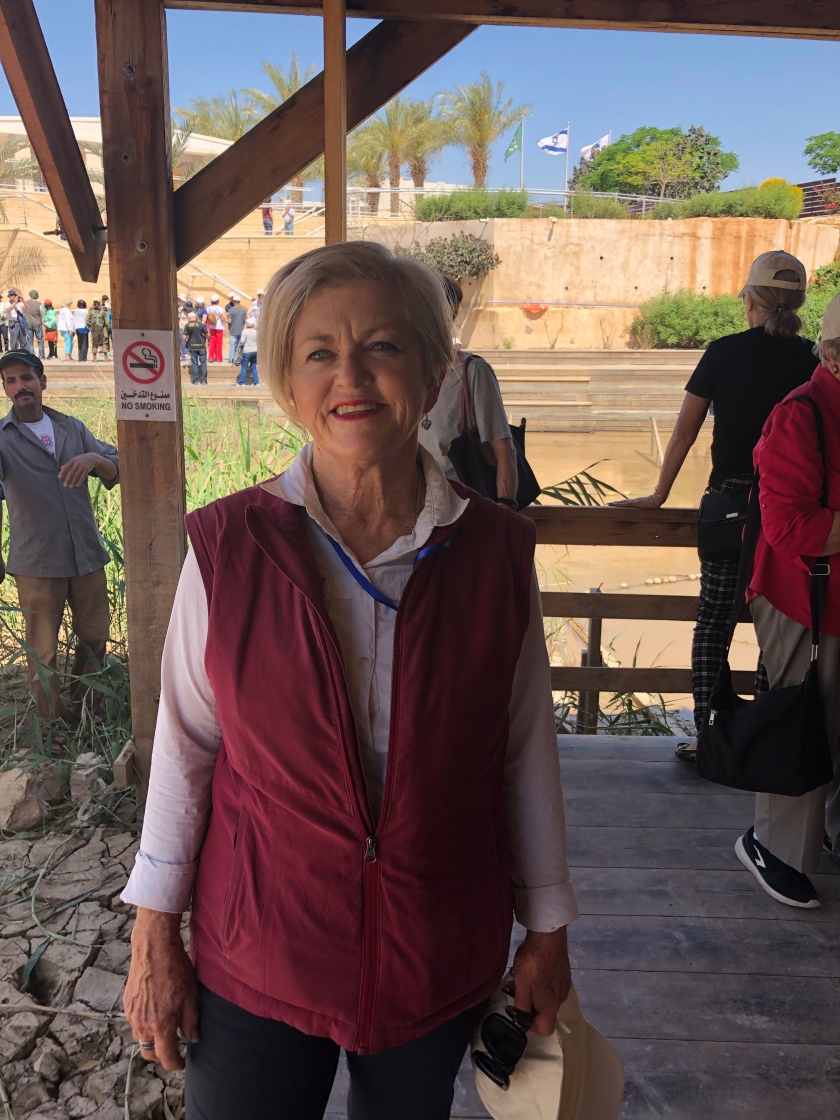 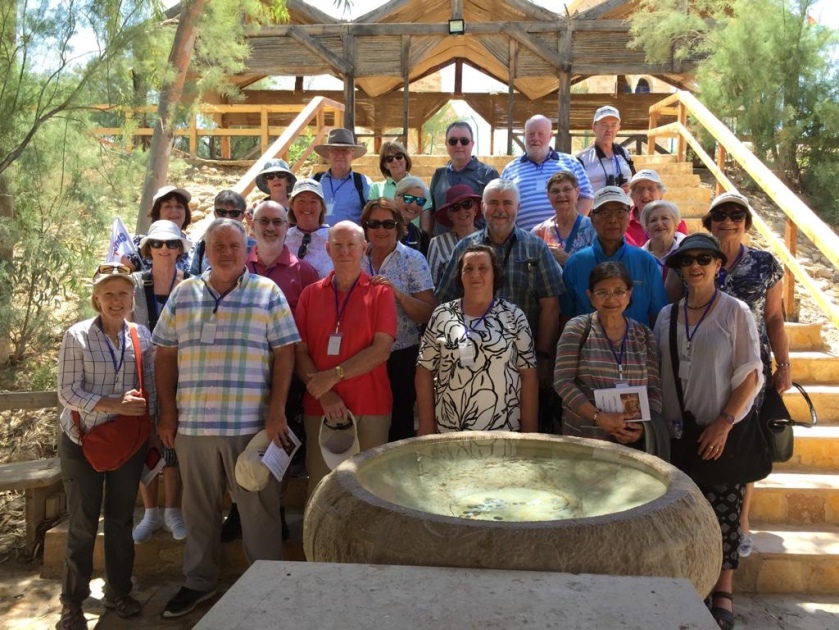 I was shocked when we went down to the Jordan river. It is not much more than a muddy creek now because so much water is taken from the flow up stream by Israel, Palestine and Jordan. Water is such a precious commodity here but still it was sad to see its state. Only recently there had been a flash flood which had swept away the steps into the river on the Jordanian side. No repairs have been made. On the opposite bank which is the Israeli side, they have concrete and railings so you can enter the water. It all looks so well looked after and a lot more commercial. The archeological diggings are on the Jordanian side so that is believed to be the more authentic site yet it isn’t particularly well looked after in comparison. Mind you there were still bus loads of tourists.

We all dipped hands, or feet into the water and Anya, filled a bottle with the (murky) water and gave some to Anne later to take back to bless Sophie. I doubt we would get it through customs! We had a short prayer service here too which made us feel united with other pilgrims over the centuries.

Our next stop was Madaba, the city of mosaics. Here in a modern Greek Orthodox Church dedicated to St George was a vivid 6 th. Century Byzantine mosaic map of the holy land right across to Egypt with pictorial representations of towns, valleys, hills etc. The newer church was built around it to protect the floor. This town had other notable mosaics in churches and even homes. 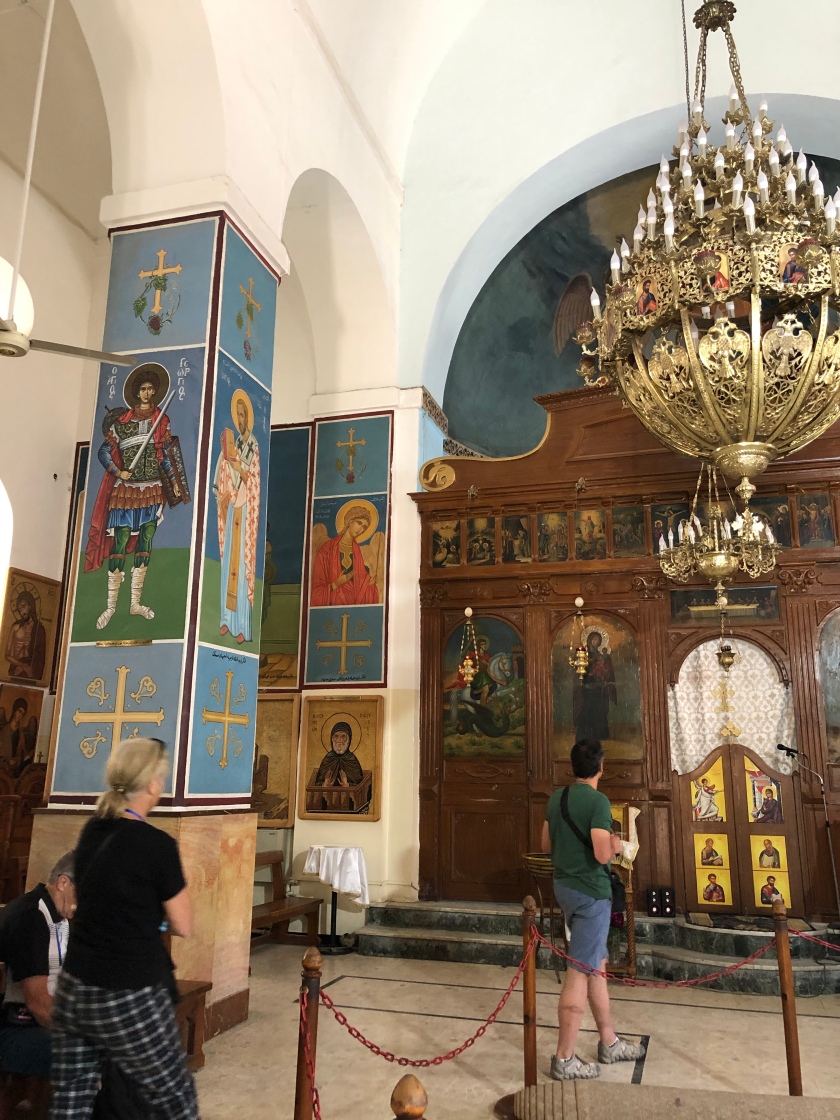 By now we were hungry and our lunch was near a mosaic workshop. Naturally we made a visit and were quite intrigued by the young woman who painted with the coloured sands and the ostrich eggs decorated with the ground slate powder which take 120 hours to make.

Our last stop was Wadi Musa from where we will visit Petra.