We had a late start yesterday because breakfast wasn’t available till 9.00am. It was a treat to be able to sleep in but of course we didn’t. Habits are hard to break. Still waking at 6.30 gave me time to write and post the blog etc. I also had time to wander around the grounds too. Weird that I had to let myself out to do that and lock the door again when I returned! Our sumptuous breakfast was served in a pavilion apart from the main house. There were only two other couples staying. 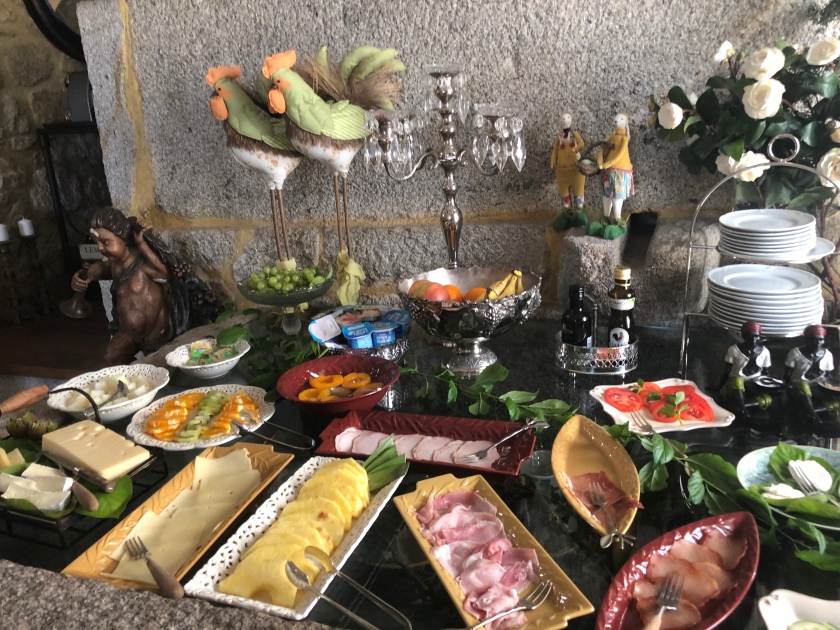 Irene had organised a taxi to take us back to where we had left the Way but when she told him to take us back ‘to the church’ he took us to another church on the hill top. Bill meanwhile had taken off to the original starting point. Note to self: be sure you know which church because there are many even in small towns! We rang Bill and he followed the arrows UP hill to us.

The church of St. Tiago of de Castelo do Neiva had been on the way for centuries and during renovations the inscription commemorating its consécration in 862 was discovered. It is the oldest evidence of devotion to Saint James outside of Spain. In the renovation they built a shrine right across half of the plaque!

While we waited we visited the graveyard adjoining the church. All the graveyards we have seen are well cared for and tiled of course-no mowing. They literally sparkle with care and fresh flowers. 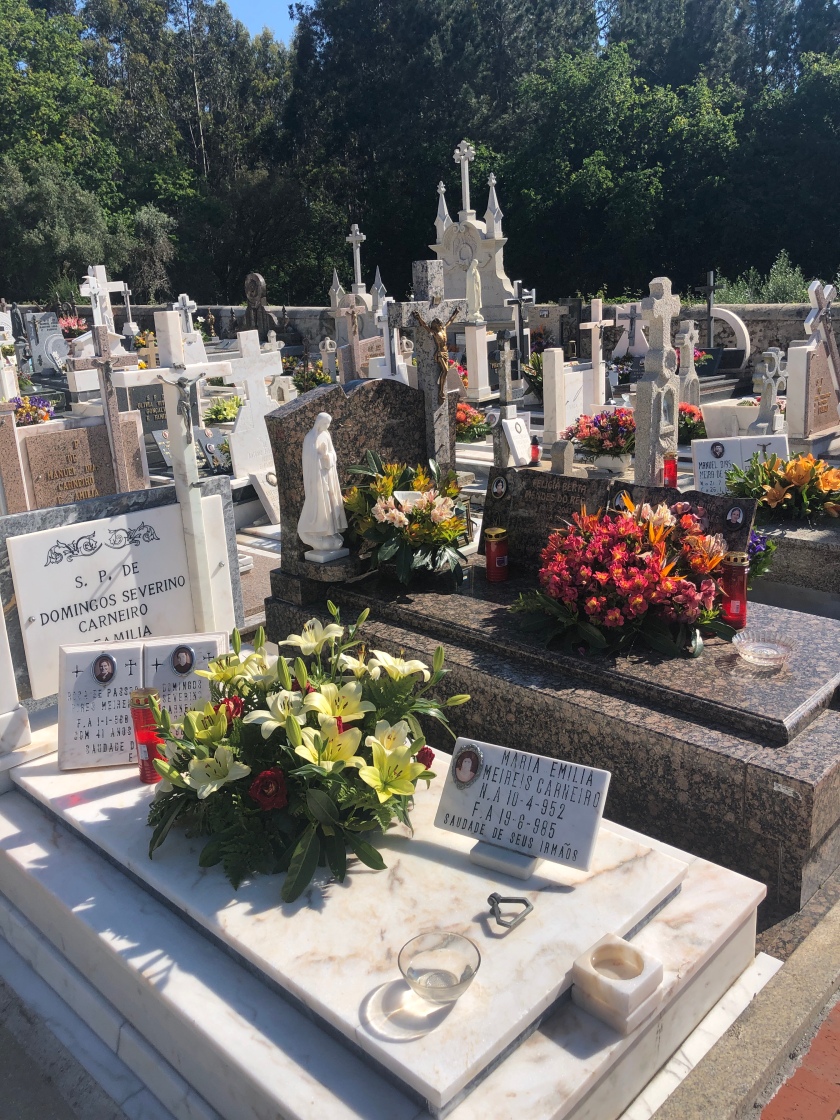 From the hill top we could see to the beach we had left yesterday. Once Bill joined us we set off again into the forest up hill then down to another chapel. They had a toilet block with a cross on it but it was locked much to our disappointment. We met several young backpackers who had stayed at the Albergue Miguel the previous night and who accepted our challenge to walk up the 861 steps to a chapel/monastery on the hill before us. We had seen several chapels on the surrounding hills as we walked.

We pressed on and the day grew very warm. We were eager for a stop to refresh. It was much more undulating terrain with patches of green between villages which seem quite prosperous as the houses are all pristinely painted with immaculate gardens. The flowers are gorgeous so the ground is fertile. We have hardly seen any animal husbandry at all along this Way but lots of industrial estates.

The next town had another Church dedicated to St James beautifully decked with flowers for Easter Monday. While we walked we heard fireworks going off and remnants of flowers at driveways. Apparently on Easter Sunday in the villages the priest visits the houses of the faithful to bless them. It went in all day and we saw the flashes of explosions in the hills while we had dinner in Viana that night. This sculpture in dedication to the liberation from dictatorship was so impressive.

We are all really tired and footsore( except for Bill). we are still afflicted with colds to varying degrees and obviously not as fit as we would like to be. Bill has had a tough time with the bike on the tracks too. We were glad to reach Viana do Castelo a very pretty city on the Lima river. Our hotel is right on the Way this time. Though it is not so flash it is comfortable. The clear glass wall to the shower and toilet is a bit novel. We have a door to a patio on which we found a fellow pilgrim in towel only, sunning herself. Like us she had done her washing. She really is travelling light.

The bridge we crossed which was narrow for pedestrians and windy is another Gustav Eiffel building.