We had a later breakfast at the hotel and set off with instructions from the hotel staff that perhaps we misunderstood because we did not see any yellow arrows or shells. We chose to follow the seaside anyway which took us through some very attractive modern villas with lovely gardens and ended up at Ofir a place on the beach.

We stopped for morning tea. As we were leaving a group of youngsters arrived for a surfing lesson!They were all togging up in wetsuits. 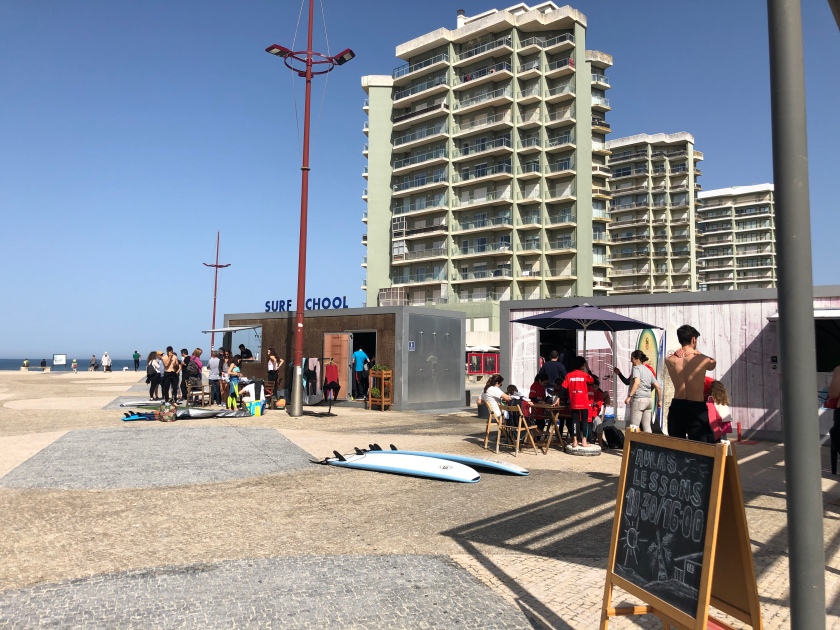 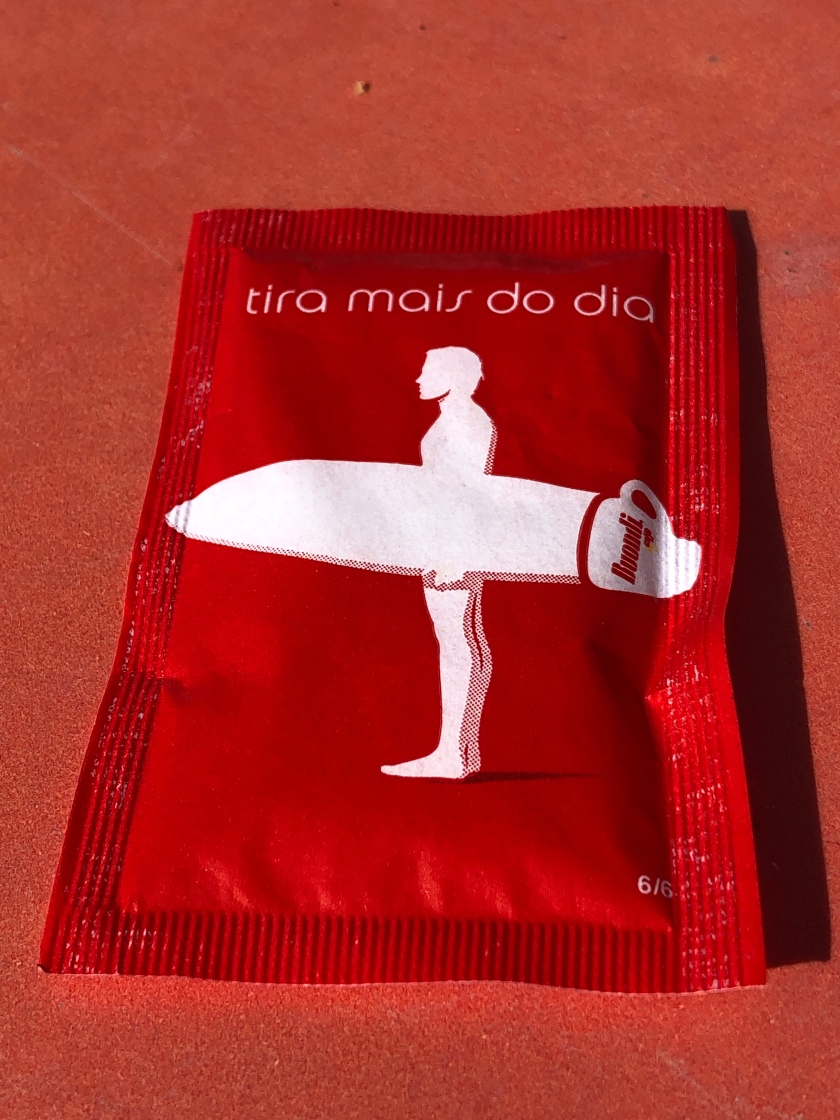 From here we then rejoined the Way at Fáo where we crossed the river to the next town which was Esponsende.

. We stopped at a market here and bought rolls and prosciutto and tomatoes for a picnic lunch. It felt like we could be at Tweed Heads or Barwon heads except for the language! The walking on cobblestones and hard surfaces was paying havoc with our feet though and we were looking for a place to picnic.

We opted for the beach and found a wooden platform on which we could perch and eat our rolls looking out to sea. It was heavenly taking our boots off and letting our feet breathe. I decided that my boots were too tight so I loosened them from toe to ankle. What an improvement. I hadn’t adjusted them for the warm weather. My feet just seem to be spreading. I will have flippers by the time I finish.

From here it was just villages non stop and hard cobblestones. This is a very urban Camino so far. We could see glimpses of the sea but we were no longer beside it and there were no breaks between villages at all.

Eventually we took to a dirt road which led into a forest. This was more my usual Camino terrain. The funny thing was it was a eucalyptus forest and we felt like we were in Sherbrooke forest at home. Beside the path was a river and small waterfalls which just lifted our spirits because we were out of the urban jungle!

We came to a monument to the Camino which had rocks and papers and items left by pilgrims. Anne placed a rock and I stepped back into the road to find a suitable rock too. I saw a rather lovely oval one half buried in the dirt. I picked it up and dusted it off then turned it over to do the same to the other side. Imagine my surprise when I saw written onto the side” In it together 8/5/2018 Australia!” The universe had spoken clearly. 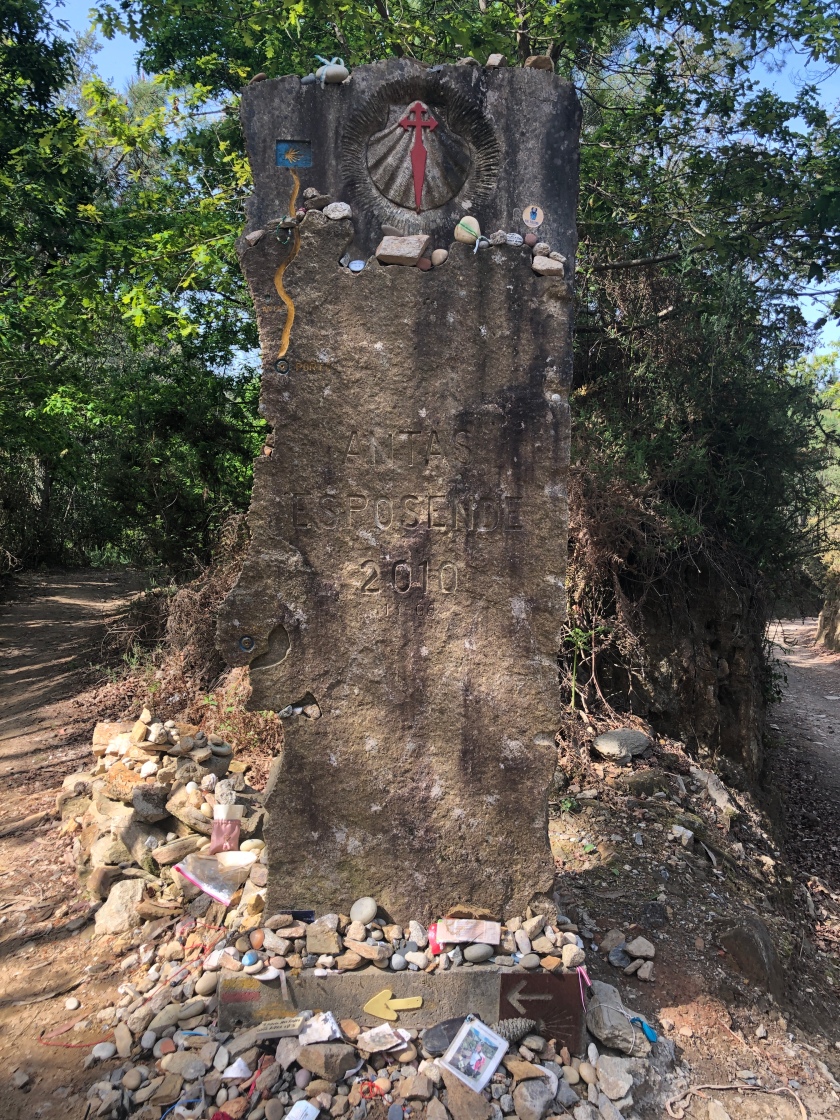 We continued along the track which was rocky and therefore quite hard for Bill with the bike. We finally arrived at a quaint White House right beside the river and crossed a stone bridge. In the shallows of the river was a brown dog swimming and playing. He was so joyful.

We were then faced with a stiff climb up a hill to Castelo de Neiva. At the top we were all pretty tired and were most disappointed when we realised we would have to walk a lot further to our Hotel. Quinta do Monteverde is a boutique hotel and after arriving all hot and sweaty we felt most out of place.

The receptionist Carla seemed unfazed but after we registered she insisted on trying to carry Bill’s case up the stairs. She struggled but insisted till Bill took it from her. We are the only people in this wing! She then showed us around the place. It would be lovely to stay for more than one night. They do breakfast at 9.00 am! No early starts when you stay at these places! We had to ring the bell for them to open the gates when we arrived! 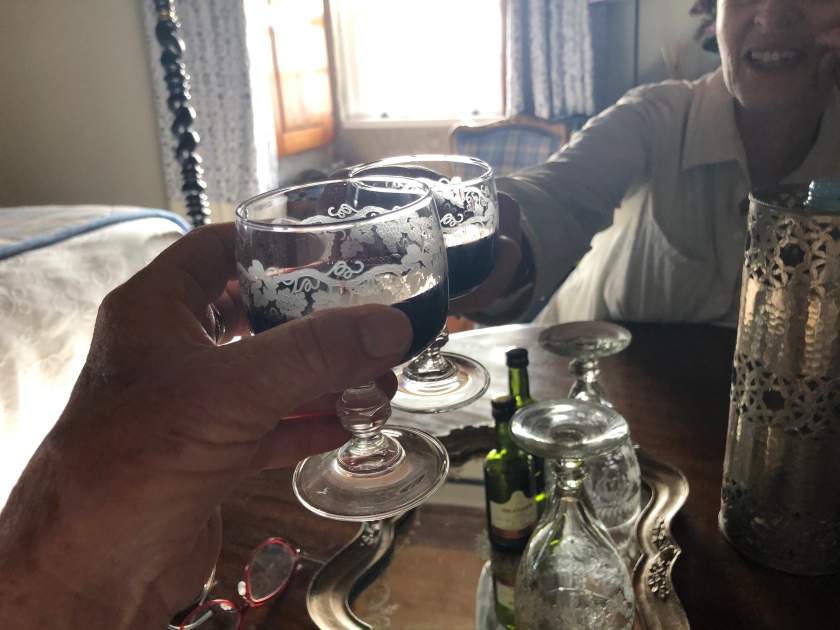 It has an honour system for the bar because there are no staff on the premises half the time which is quaint and then in our room Anne and I spied two little port bottles and tea making facilities. We promptly opened the port. Today due to our diversion and the hotel not being on the Way we have walked 23.3kms. Irene has ordered a taxi to take us back to the starting point of The Way in this town tomorrow morning!

Carla suggested a place for dinner that was close by. Just a left turn and another left turn, 5 minutes. Hmm! After refreshing with showers, she was quite surprised to see us spruced up and looking quite decent. We set off but in the end resorted to google maps to find the place. What a find. The small restaurant O Tasco Regional Restaurant was filled to brimming soon after we arrived. We settled on Tapas for a change and everything was delicious. We asked for vegetables and we got our favourites, padrones but also snow peas. We had octopus and again it was so tender with a type of salsa. Scrumptious. Irene had a white sangria which was the best she has ever tasted and I had a taste and agreed. We had pork, mussels, cold savoury morsels as well and the best cod cakes yet. It really was a fabulous meal. So many of these Portuguese restaurants are quite tiny (about 20 people) but they fill up and turn over tables yet you never feel any pressure to move. Very easy going and good quality food. It cost us €70 including dessert, tips and drinks ( a bottle of Rose, two beers and two white sangrias). 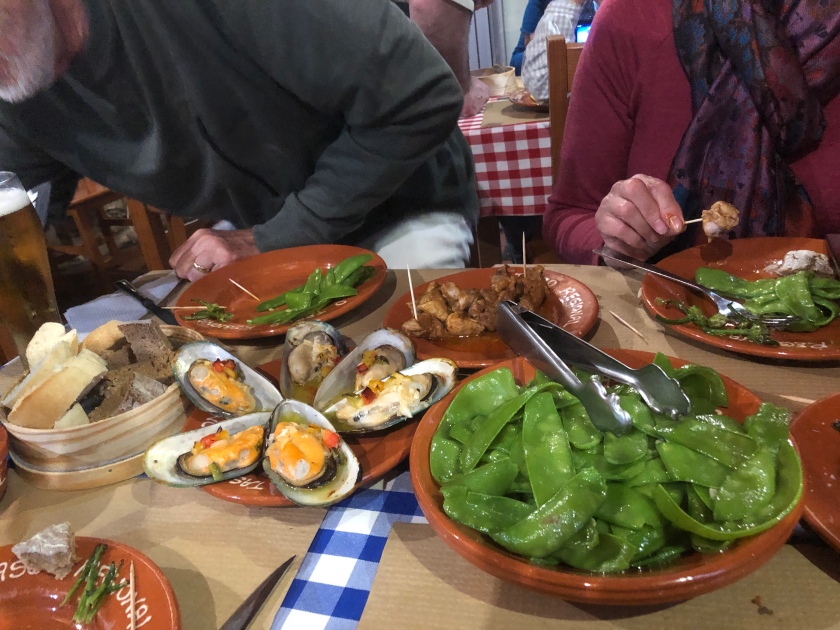