We started this day’s tour at Bethany where the tomb of Lazarus can be found. This town has suffered significant loss of tourists since the Wall has gone up and there is much unemployment. The original entrance has been changed since a Mosque was built over part of the area. Instead we went down some steep stairs at the side of the tomb. A few people found it a bit claustrophobic as the entrance was very small. It was usual to have a little window above the tomb door so that the body could be checked in case they were not actually dead! The Jewish tradition was that the soul hovered for three days before passing into the next world and it was for this reason that Jesus did not come before four days to raise Lazarus from the dead.

Around the tomb where many sellers of souvenirs. They are so desperate to find ways of making money. Nothing they sell is very expensive and while they implore you to buy things it is hard to resist. They don’t pester or make a nuisance but you only have to look around to see how depressed the economy is. 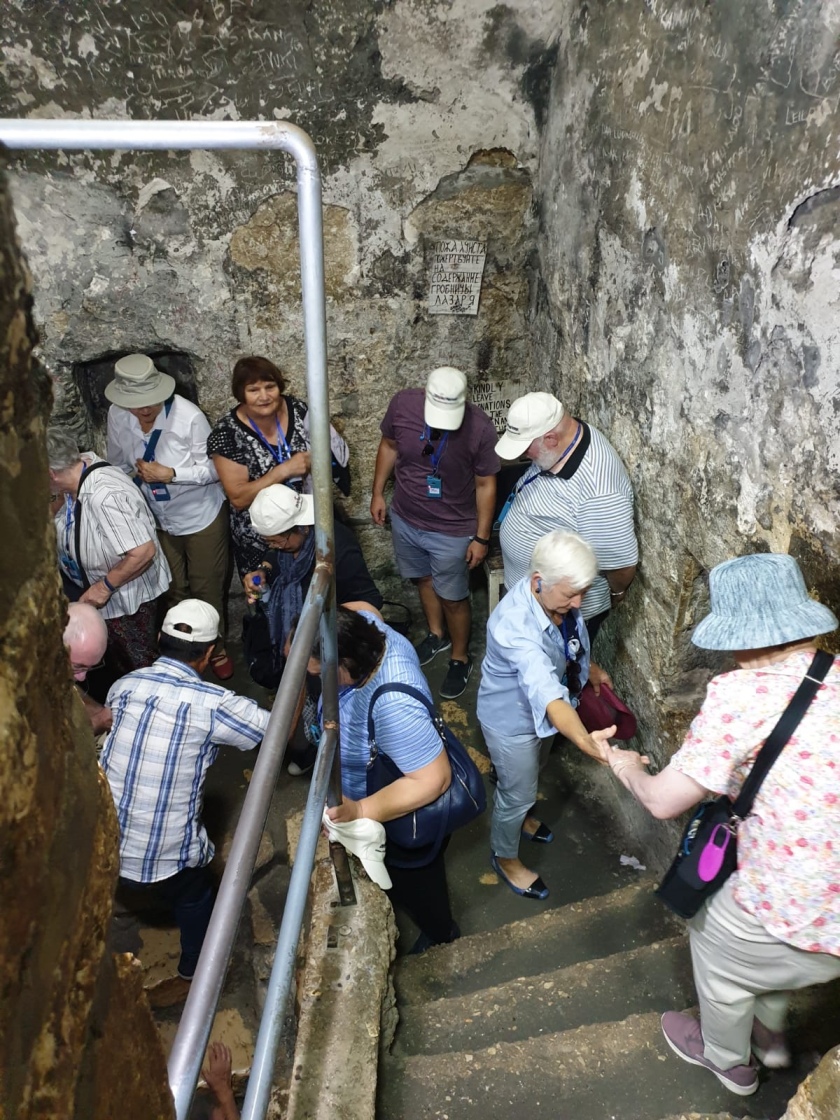 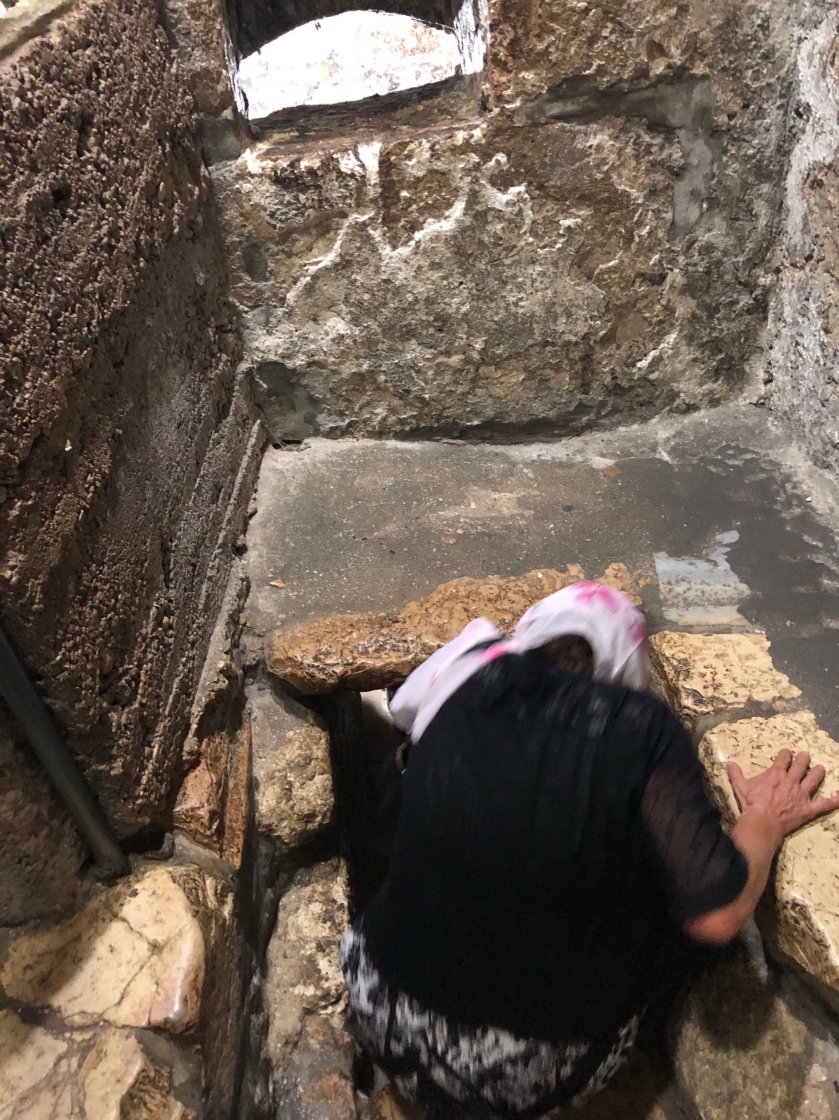 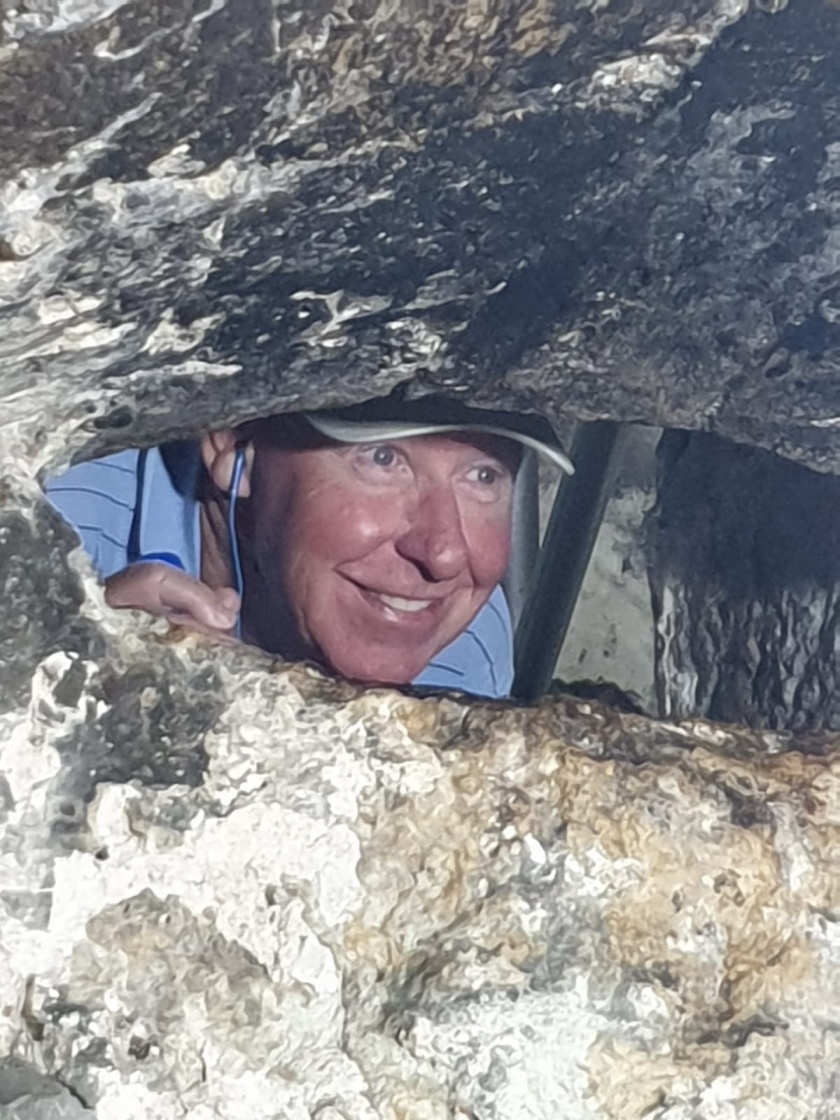 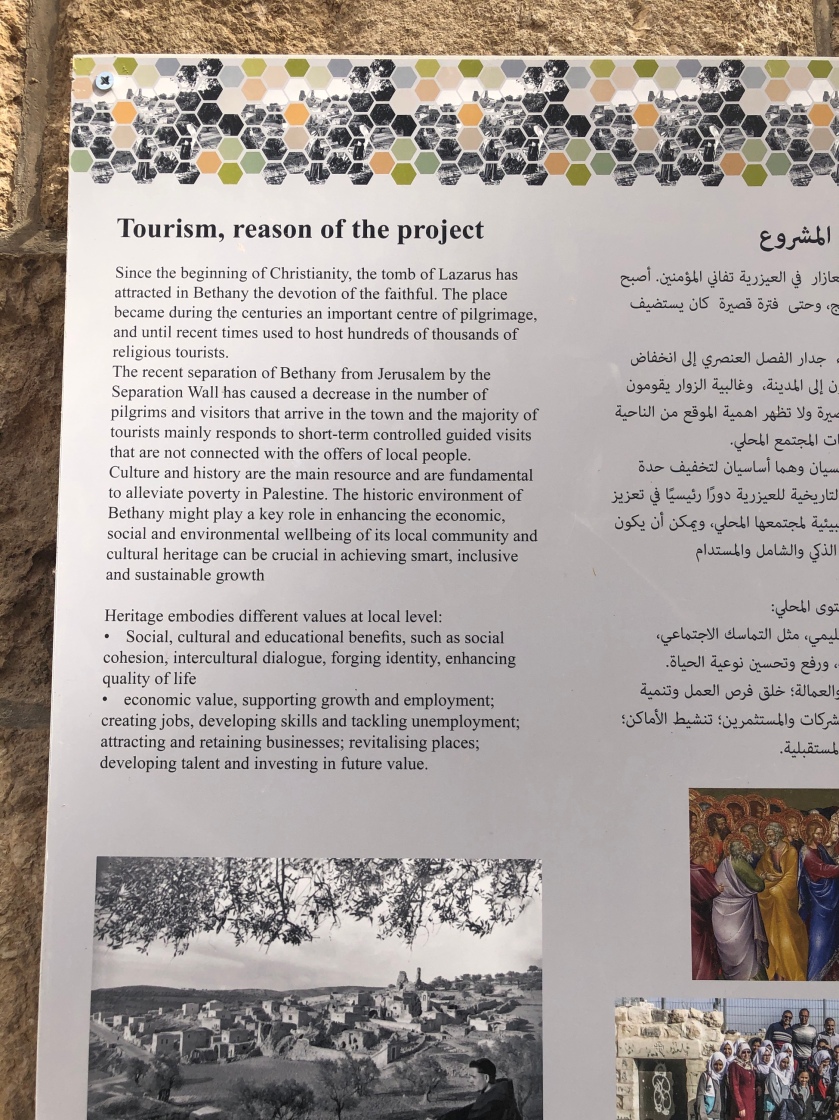 fFrom here we went to Mt Zion which has many important sites. It was once enclosed in the city walls and has the Cenacle- The Upper Room where Jesus celebrated the Last Supper with his disciples. The disciples apparently also assembled there at other times following the resurrection and it was here that Jesus appeared to doubting Thomas and also where the Holy Spirit came upon the believers who were gathered there. Of course in the Byzantine era an enormous church had stood on the site and was later rebuilt by the Crusaders. It was then taken over by the Muslims during the Ottoman period and converted to a mosque. The stained glass windows have verses from the Koran. The room stands above an active synagogue and some extreme Jews have tried to block Christians from visiting here. 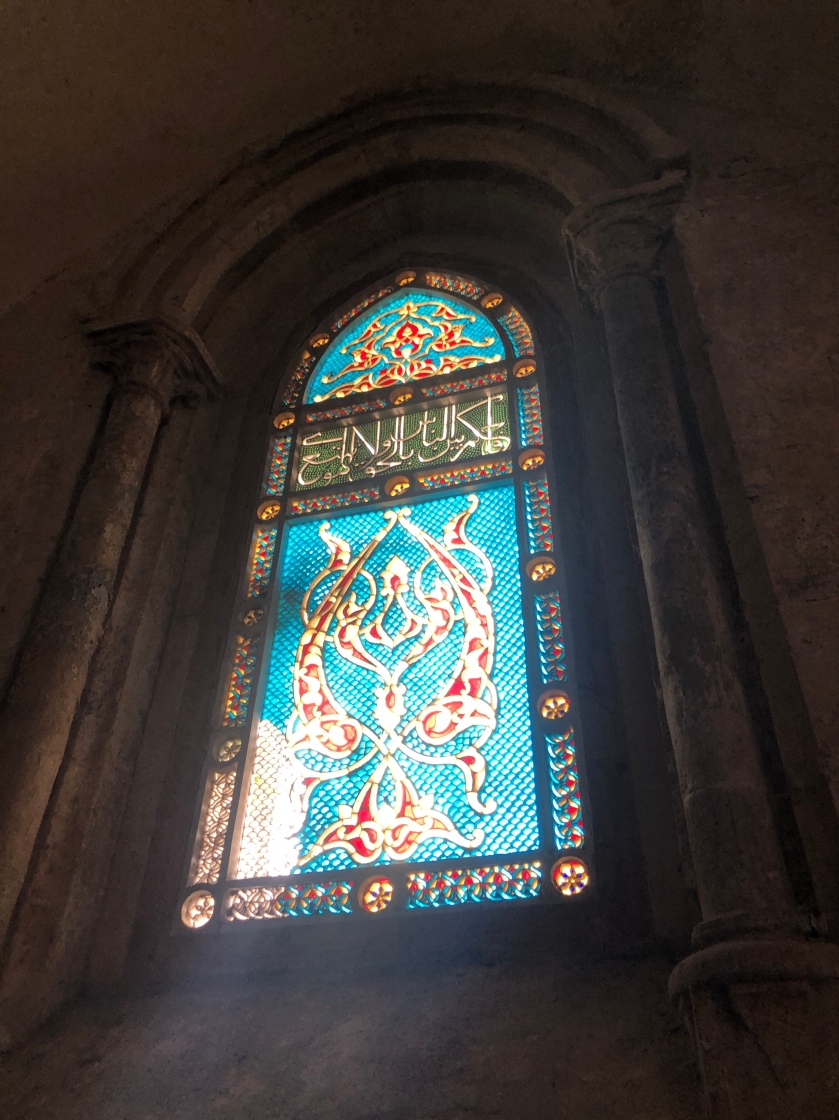 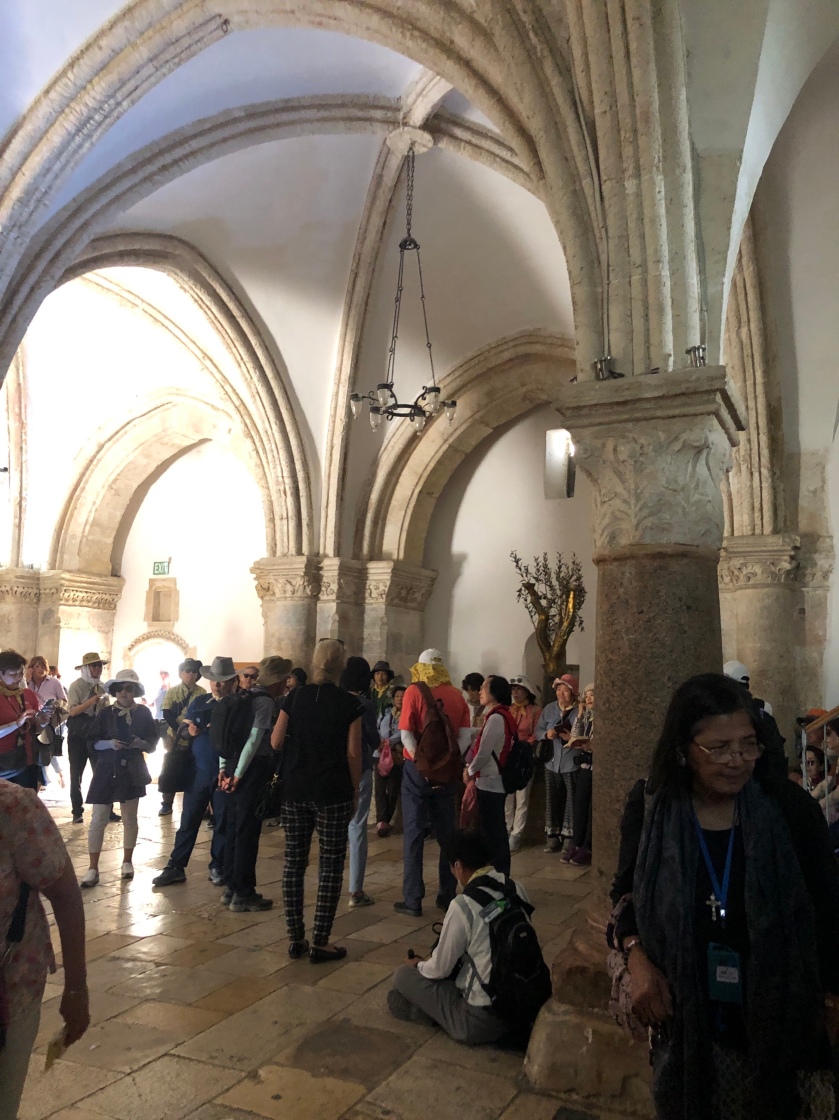 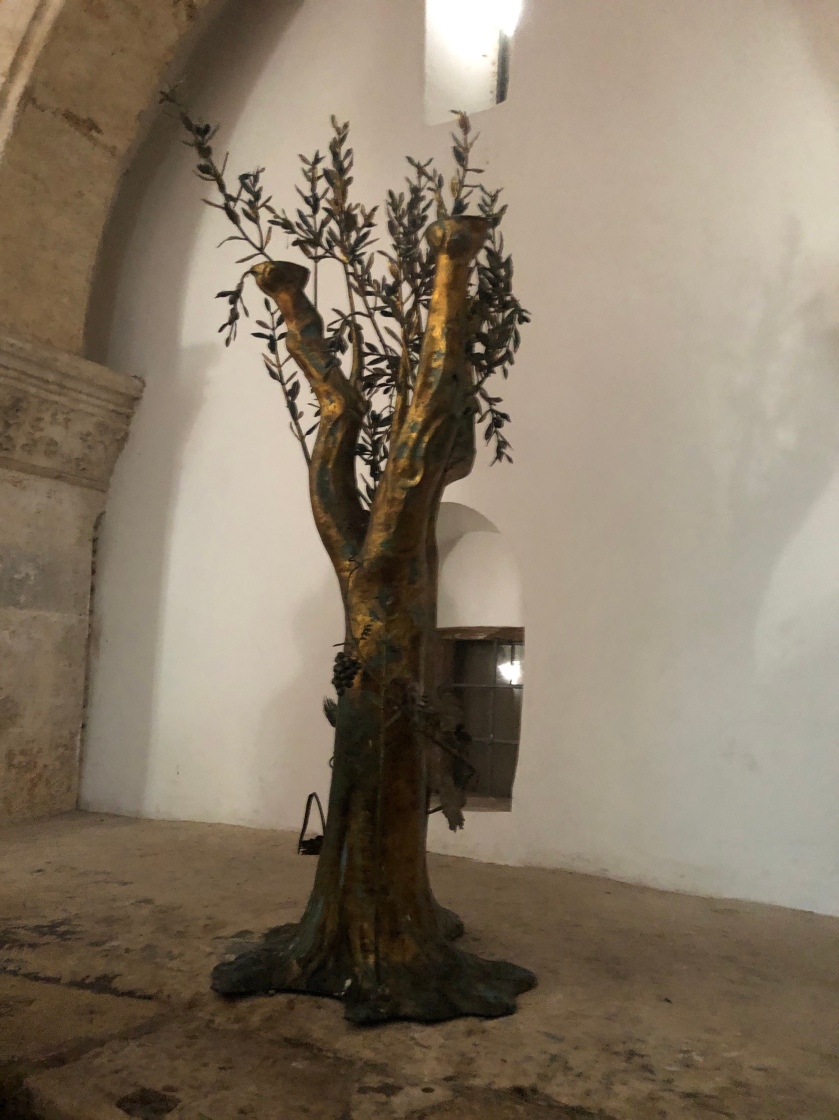 This sculpture that stands in the room was presented to the Synagogue by Pope Paul VI and represents the three religions that spring from the Old Testament. The Olive branch represents Christians, the grapes represents Jews and the wheat represents the Muslim faith. Under this room is the tomb of King David which we visited very briefly so there are competing ownership issues. 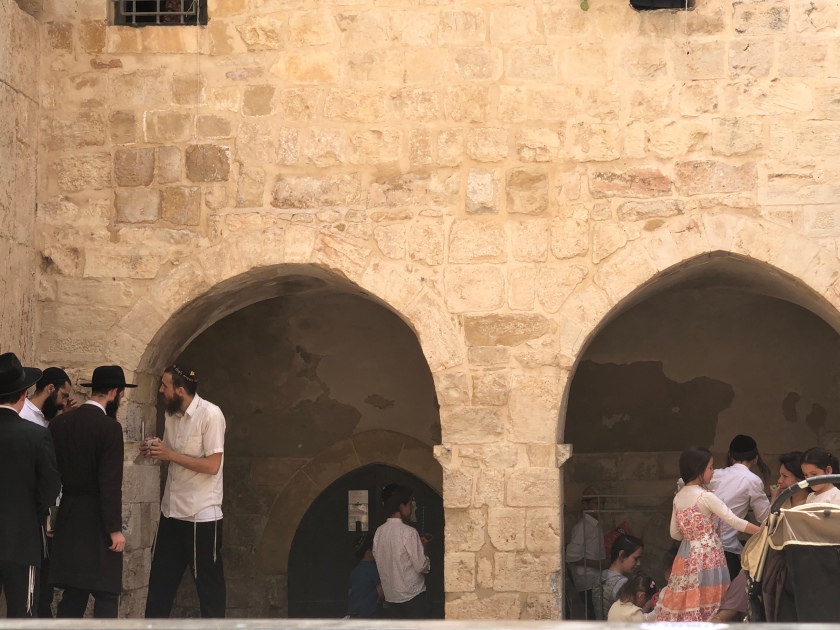 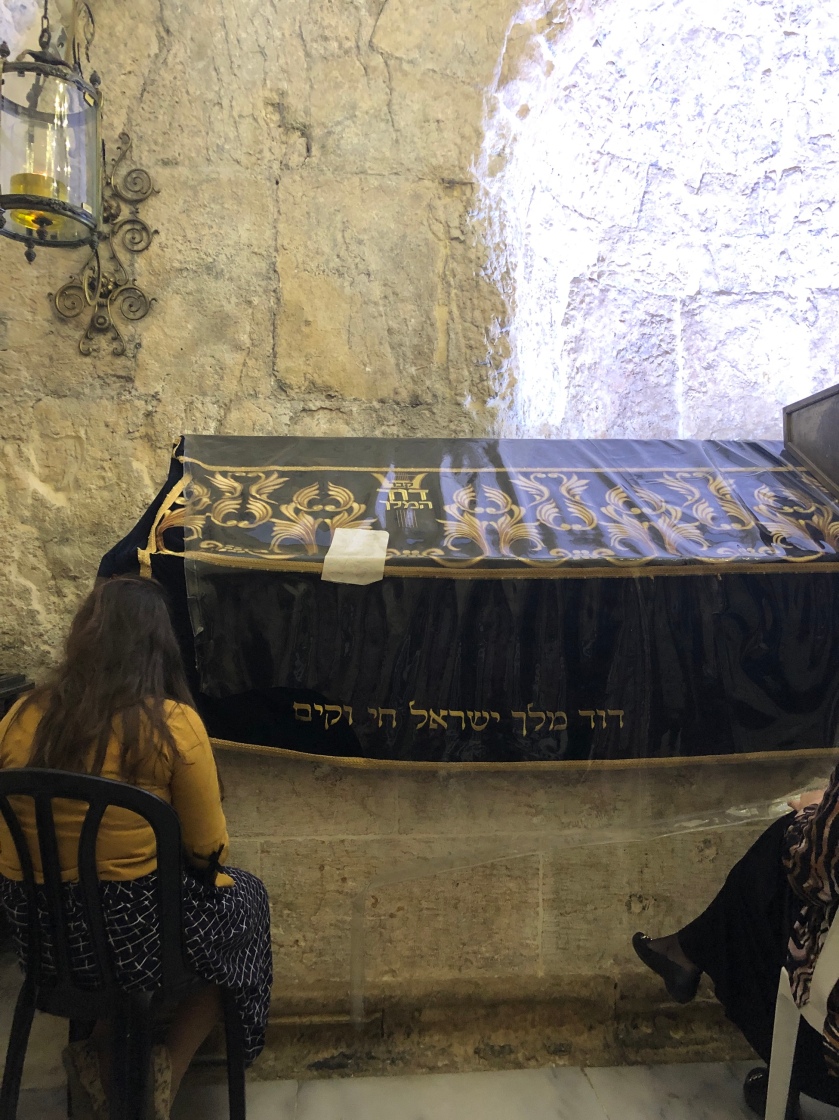 The guide suggested that the tomb of King David was not actually there but elsewhere. We have found that there are often competing versions of where these events occurred or people are buried. When the tradition is supported by a variety of sources then there is usually agreement and reasonable confidence that the shrine or person is in the correct place.

From here we visited the Dormition Abbey, which marks the place where the Virgin Mary ascended. It is a relatively modern church built by the Benedictine Fathers in 1906. It is very bright and actually incorporates the remains of previous churches that stood on the summit. In the crypt there is a wood and ivory effigy of the Virgin Mary. It was built by the German Kaiser but he didn’t want his name on any plaques or to be honoured, though he did leave a hint in the shape of the bell tower which is like Bismarck’s helmet!

Our last Church of the day was the Church of St Peter in Gallicantu which is dedicated to Peter’s denials of Christ. Gallicantu refers to the crowing of the cock. The church was built again over the ruins of previous churches and a monastery. It is a modern church though it has underground rooms which were possibly used as a prison and guard house. It was believed that Jesus had been held here before his trial. 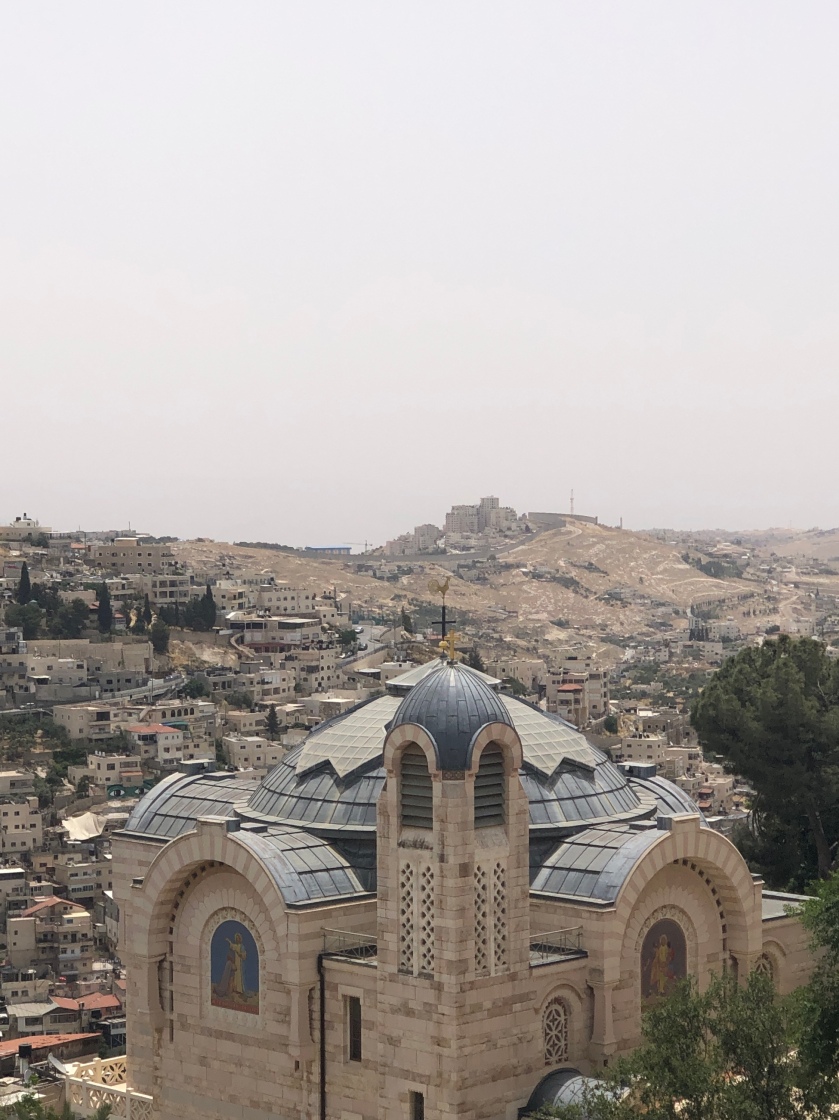 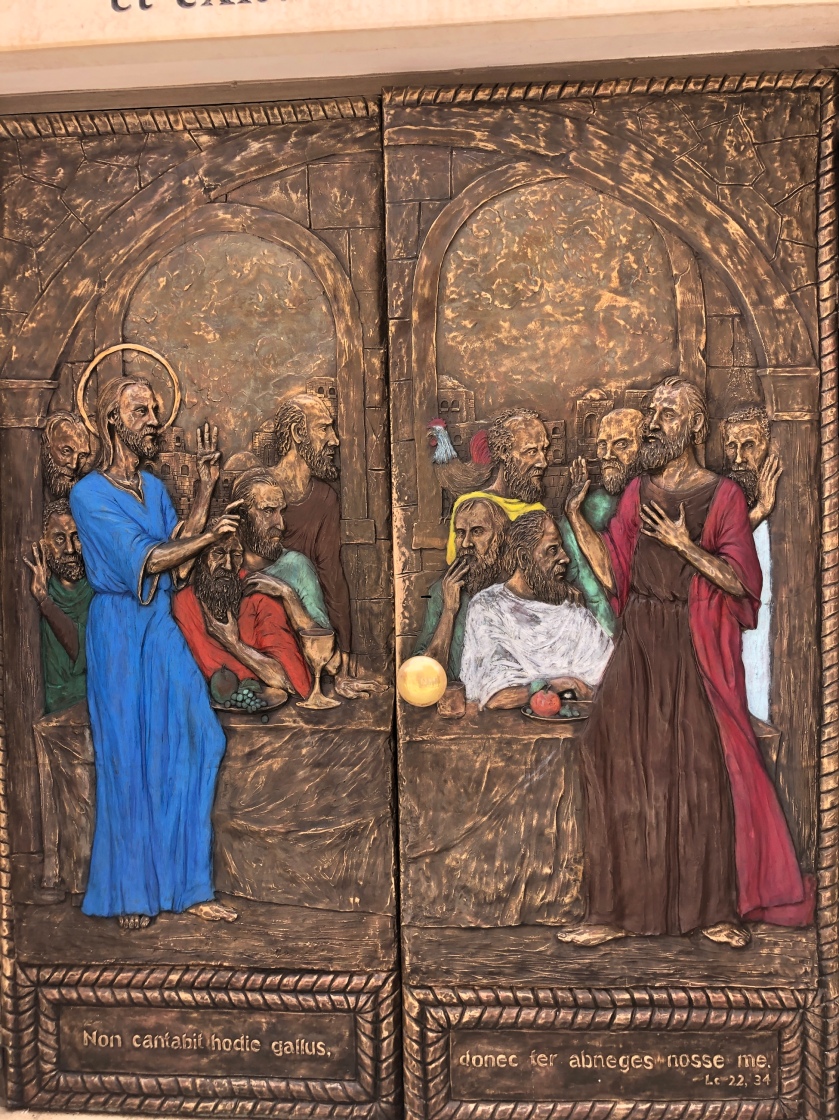 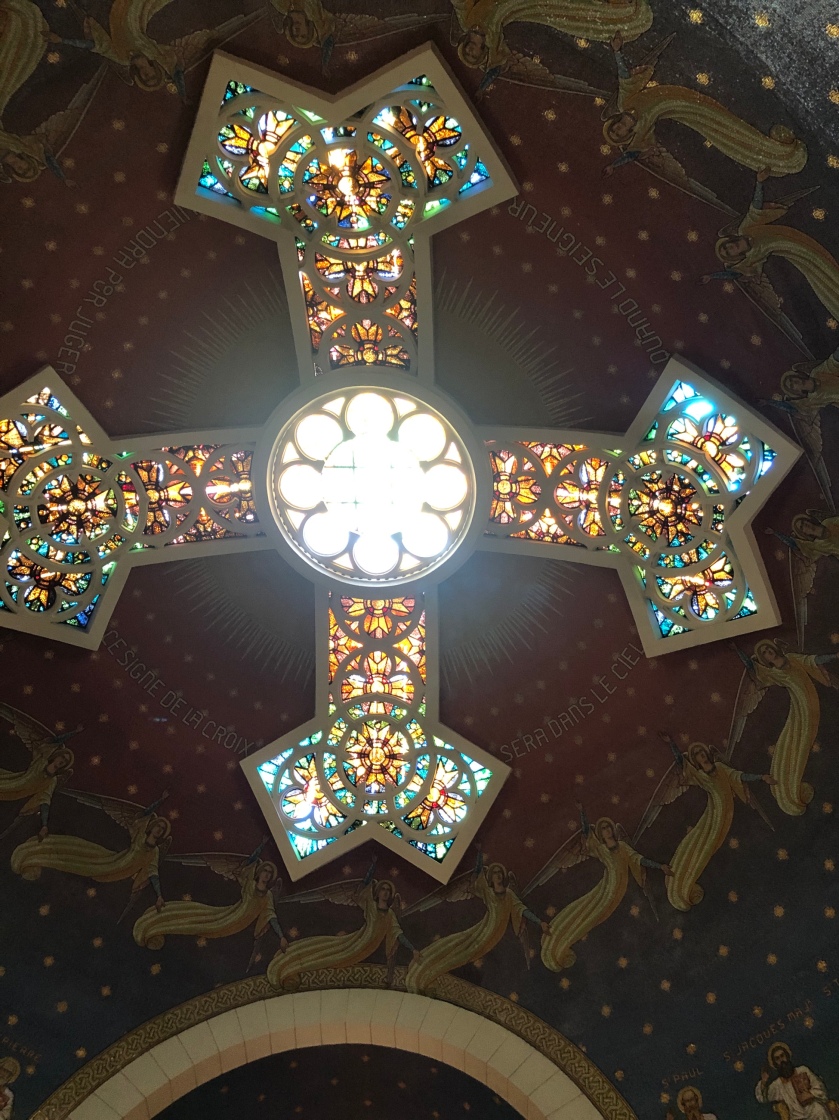 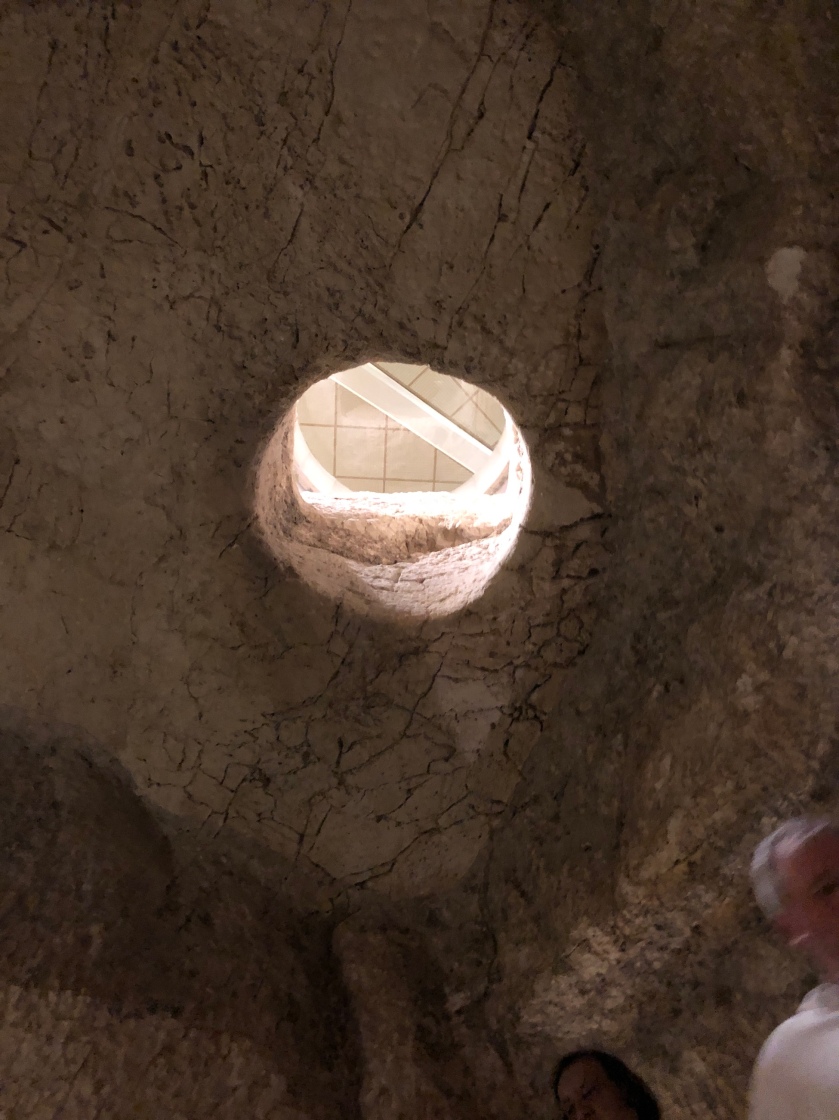 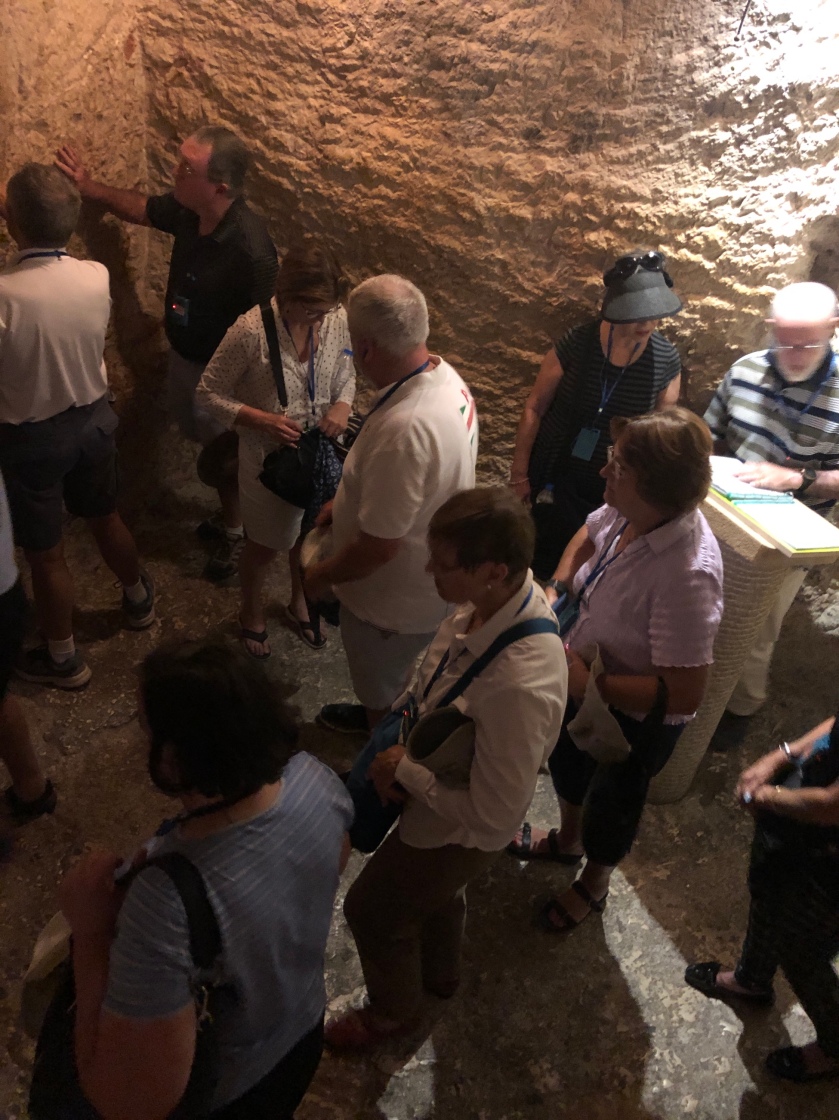 The hole in the ceiling was the way people were put into the room below. I think it would be quite terrifying to be lowered into a black pit like this.

The history of Roman occupation and resistance is spread through out the Holy Land. Civilisation on civilisation through the ages has been a constant theme on this trip as well as the building and destruction and rebuilding of churches. No place considered Holy has been left ‘ unchurched’!

From the viewpoint behind The Church there was a grand panorama of Jerusalem. The weather was getting hotter all day so the panorama was somewhat bleached out. I felt really dehydrated. 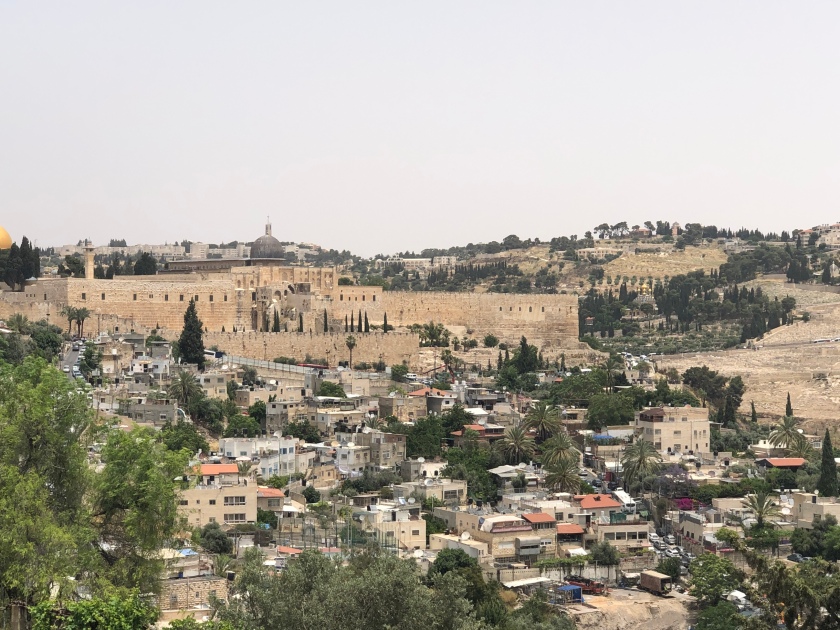 we finished this day with a concert in St Georges Cathedral, this had been the home of our tour organiser. Her father had been the Bishop. We got to meet the current Bishop. It is an Anglican Church but they offer their Cathedral to the Magnificat Institute. The children who are taught musical instruments are from all faiths and the teachers are mainly Jewish or Christian. It struck me as an indication of the tension in this country over religion and ethnicity that this fact was announced to the the audience. I don’t think anyone back in Australia would have their faith announced at a concert!

It was very charming and the students played well. Some were very good. It occurred to me that in many of the grand churches I hadn’t seen any organs. Two organists played as part of the concert. The organ of the Cathedral had a rich tone. This was our last day in Jerusalem.

What we have seen here and the way the Palestinians are treated has raised many questions for all of us. Israel seems determined to possess all of the land but it doesn’t want Palestinians. It is hard to see how they can resolve the need for a Palestinian state and the Israeli push for more land all the time. This is a very complex environment politically, historically and economically. It makes your head spin and your heart sad.