This was our day to explore the old walled city of Jerusalem. Again the guide reiterated our staying close together. We were a bit cavalier until we entered the gates of the city through the Lions gate or St Stephens gate. A truck preceded us and very nearly got stuck going through the gate. There was no way people and vehicles could pass at the same time. Our first stop was the home of the Virgin Mary. Her parents lived near the Bethesda Pools renowned for healing. It was here that Jesus healed the man who had been paralysed for 38 years. Mary had been given to the church as a servant when she was about 4 and it is believed that she was visited by Angels even as a child. During the Crusades the Church of St Anne’s was built (around 1130) and dedicated to St Anne , Mary’s mother and to commemorate the healing of the sick man. When the crusaders were defeated Saladin turned it into a school. Later when the Turks (Ottoman Empire) were fighting Russia in the Crimean war they presented the site to the French in exchange for their support during the war. It now flies the French flag and is considered French territory. It was given over to the White Fathers a French Order.

When Mary came to womanhood she was sent to Joseph who was a widower to help him. This is how Jesus came to have siblings. The non canonical book of St James gives more information on Mary’s life. 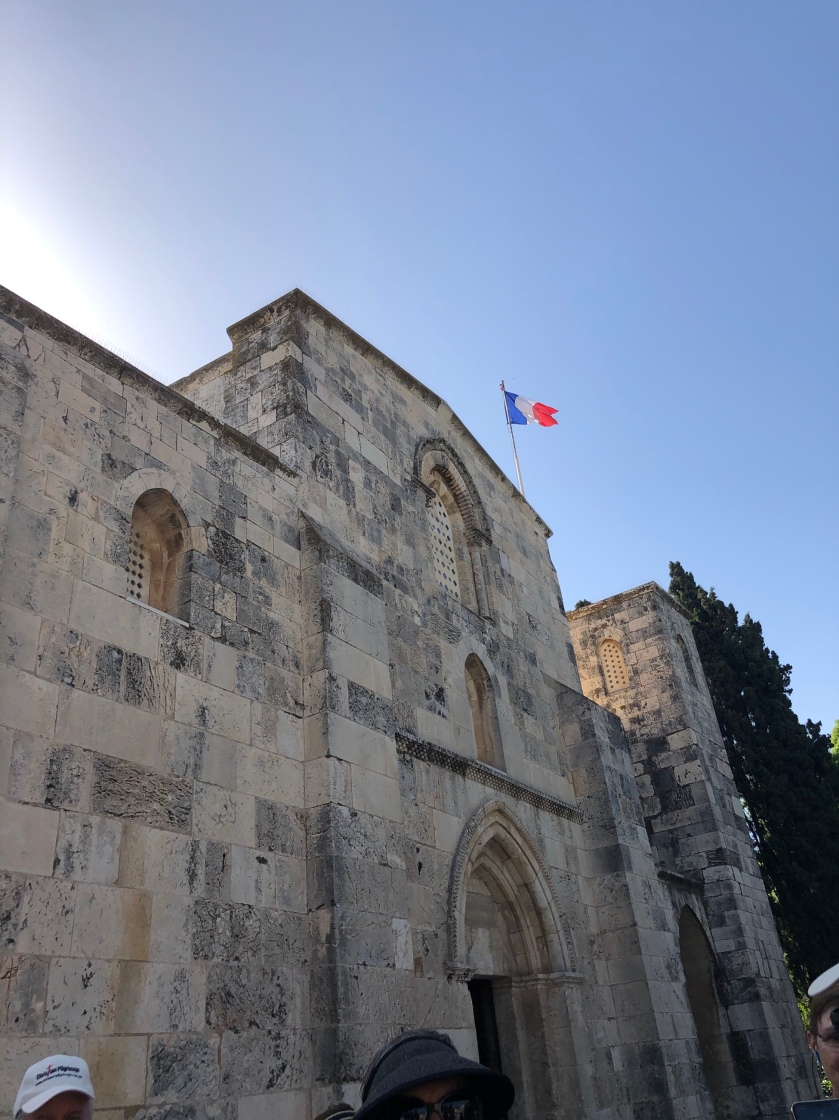 From here we started the Via Dolorosa, the Walk of Sorrows which traces the journey of Christ from sentencing, to death on the cross. Now we understand what the guide meant about sticking together. It was really hectic, as the kids would say! Crowds of pilgrims are doing the same thing and it is easy to get separated. Now we are glad of our Whispers. They are little receivers so we can always hear our guide’s commentary.

There are fourteen stations which mark the journey towards Jesus’ execution. Father Dean had a modern commentary expressing the feelings and thoughts Jesus might have had as he went along. They were very poignant as we read them but also the crush and bustle of people was somewhat a distraction to our trying to connect with the words. 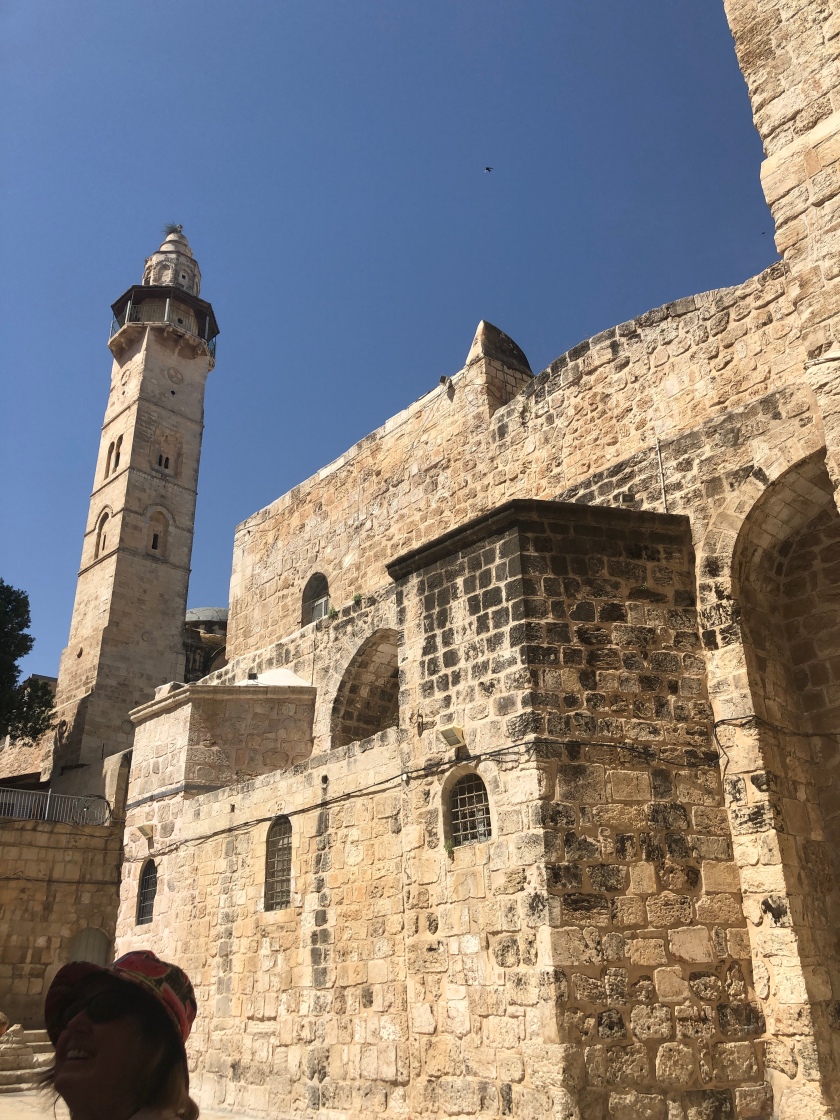 Finally we arrived at the Holy Sepulchre where the last four stations are. This church was built by Helena the mother of Emperor Constantine after he converted to Christianity. It was originally built in the 4 th Century but was demolished by the Persians and then rebuilt in AD 628 by Heraclitus. The only original parts to survive were those excavated from the rock such as the Golgotha mound and the Sepulchre itself. The Sepulchre is where Jesus was buried after he was crucified. The Golgotha was where he was crucified. These incredibly important places have shared ownership by several denominations, Catholic, Greek Orthodox, Armenians, Syrians and Copts. We had to queue for about 45 minutes( actually pretty quick) for a less than five minute look. The priest who supervised the entrance to the Holy Sepulchre made sure you go in and out quickly. He was quite ferocious and told one group (four at a time only) to hurry up. He said, ‘ Kiss the stone and out!’. Hardly a spiritual experience.    

The next queue was for the Golgotha and we all bunched up because people get pushy even though you funnel into a single line. This woman had edged past me and when her husband started to push through I said stop. Then she said he is my husband so I let him go past, but then their friends wanted to push past. I really got firm then and said No and stood right in front of that group. We had helped an American woman who was on her own to get in the queue so I felt quite justified. People are surprisingly pushy and not reverent which was disappointing. We all had to queue so it meant waiting your turn. Our guide was nearly in a skuffle when one of the priests shoved him to get over. He politely but firmly told him to keep his hands off! Another tour guide he knew came to support him.

We saw many people kissing stones or altars and wiping scarves over the stone Jesus was laid on before he was buried. There were many people showing their devotion. The anointing stone. 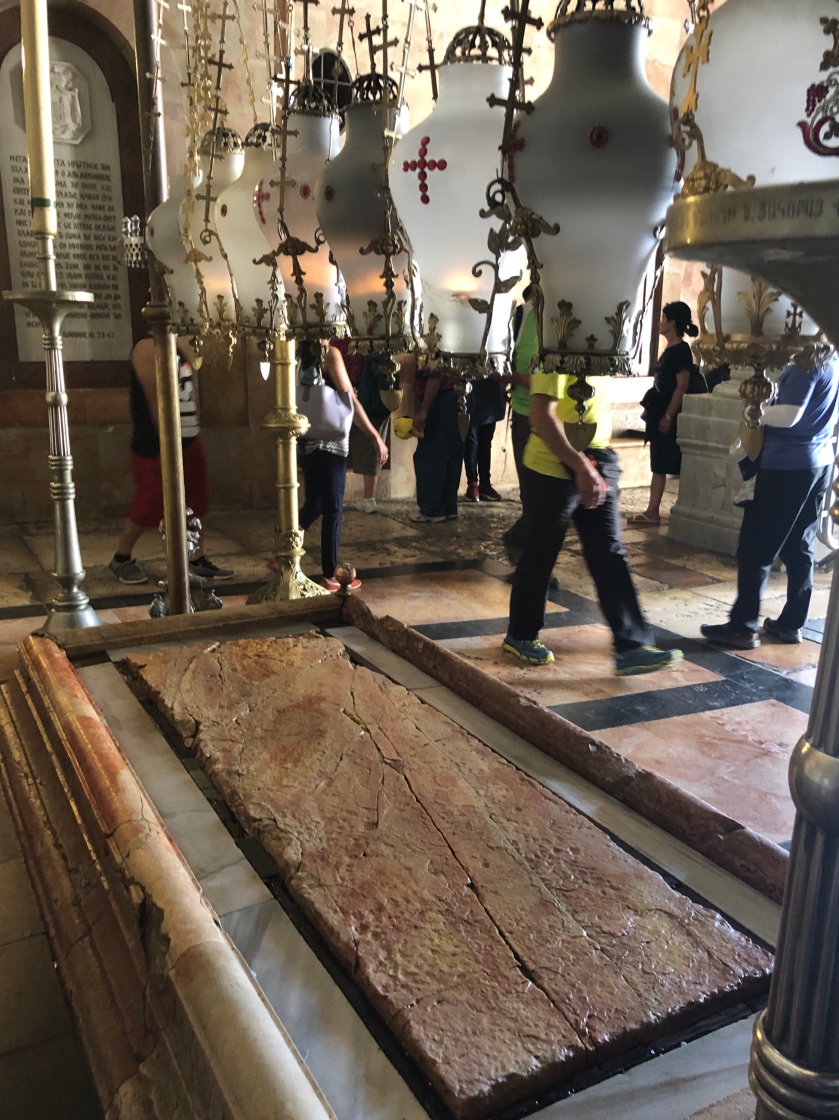 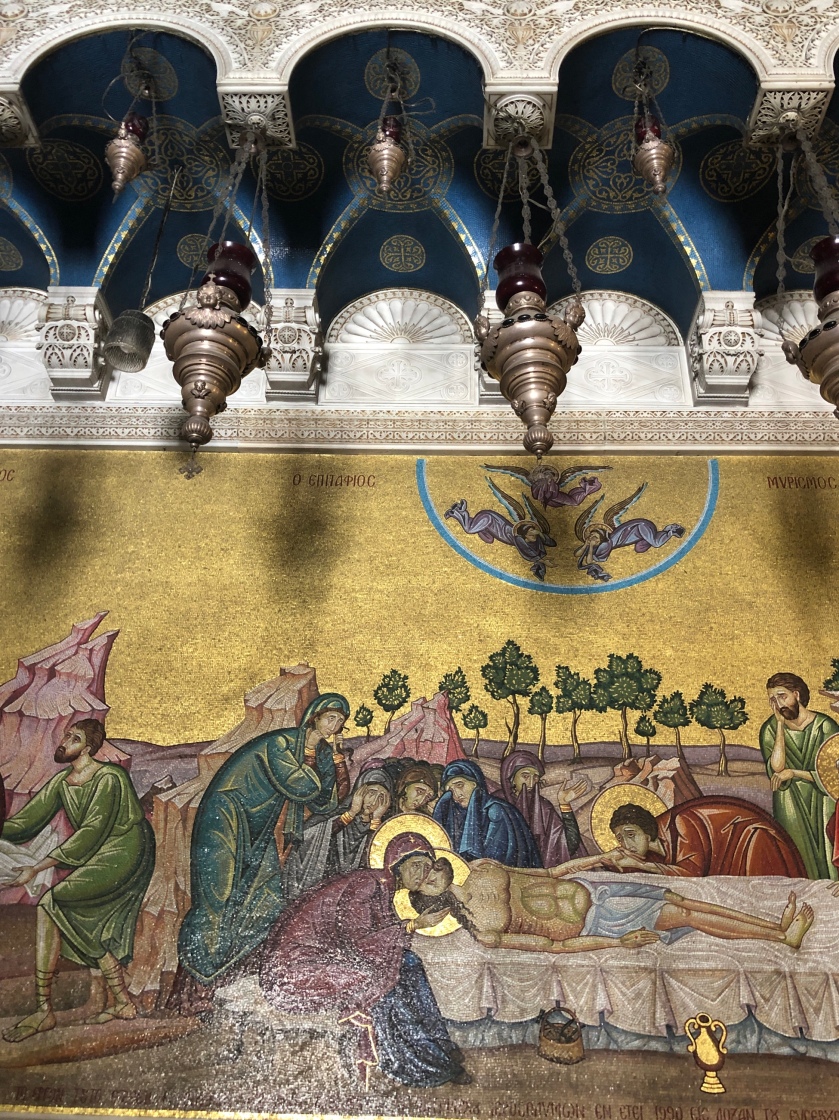 Our guide was able to secure chapel for Mass while we waited to join one of the queues. Under the church are numerous chapels. It was a complete warren.

We finally escaped the throng and headed to a great place for lunch. It seems sad to say we escaped but it was so intense. Whatever your faith this is an amazing place and it makes you think deeply about culture and religion and life.

After lunch Anne and. I wandered around looking for an elusive atm because we were almost out of money and discovered more market areas away from the crowds which was great but still no money was found. It has been a consistent problem trying to find holes in the wall or even open banks to extract money or get US dollars at all. We had not realised how hard it would be otherwise we would have brought US dollars from Madrid or Dubai. We have managed but it was awkward and we became quite adept at getting into toilets for free because we didn’t have any change or dollars. I offered a guy 2 shekels or 20 for a 3 shekel toilet and he let me in for the 2! Change is a nightmare.

When we all regrouped we went to visit the Wailing wall which is the wall left from the destruction of the huge temple that was above it. It was considered the foundation of the universe and was destroyed several times. The Temple Mount was also where the Muslims believe Mohammed ascended to heaven and when they took control in the AD 700s they built the beautiful Dome of the Rock and El Aqsa Mosqe.

Thousands of kids were there signing up for military service. It was a seething mass of teenagers. The wall has a division to separate men and women and it is customary to leave prayers or supplications pressed into the cracks because God is in the wall.

Masses of buses were lined up outside the wall to pick up these kids who like kids all over the world are in a world of their own. They got on and off the buses while we were melting and desperate for our air conditioned bus to arrive. It was very hot. They are having a heat wave here!

When we returned to the hotel Anne and I rushed up to the rooftop pool to cool off. It was delicious though very fresh to get into and shared with thirsty pigeons and crows!

Later that evening we went back to retrace the Dolorosa and visit the Holy Sepulchre. Unfortunately we left it too late for the Church. The priests stop entry at 8.30 and close the door at 9. He wasn’t about to bend the rules for anyone! I can understand because it probably takes half an hour to check everyone is out. Then there is a ritual of locking the outer door by a local Muslim whose family has had the key for years. Go figure.

We decided to do the Dolorosa anyway and it was very moving to follow the last steps of Jesus in the quiet of the night. We could meditate on the words and feel the anguish he suffered. When we got back to the Church even the outer courtyard door was locked so we completed the stages by the light of the Lutheran church nearby. We were all glad we had made the effort. Some others in the group had got there earlier and had a better experience within the church, though the ferocious priest was still hurrying everyone!