We had scheduled a rest day in this town and so after breakfast we explored the Monterreal Fort which is at the Monte Bois peninsula. It has been inhabited as a walled precinct for over 2000 years with the Celts, Phoenecians and Romans befor Christian settlement. The town was developed by royal decree from King Alfonso lX and was subject to many attacks from corsairs (pirates). There are really only the walls left of the fort but it is impressive from the land and harbour. 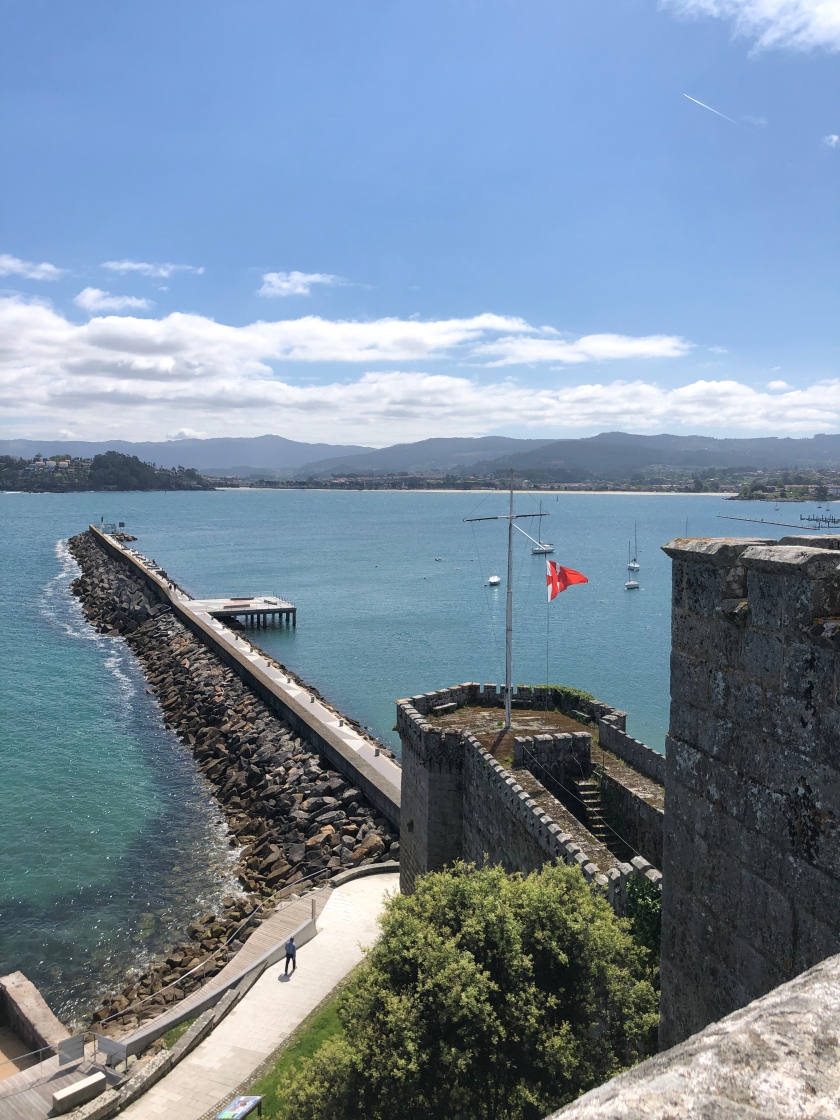 The tourist office had a good booklet of a few historical walks we could do in town or rather use to identify the objects we had seen already! There is a replica caravel ( ship) of the Pinta on which Pinzon and Columbus sailed to the new world and on which they returned to Spain and visited Baiona.

This event was also commemorated in a sculpture portraying the meeting of the old world and the new world and was placed on the area where an American Indian, who had returned with the explorers was buried.

Irene and Bill went off for a rest and Anne and I decided to go and put our feet in the ocean. We walked the length of the promenade to a beach where we found some unique shells and waded in the very cold water. It was lovely to wander on the sand and then over to another sculpture and little chapel.

The chapel of St. Marta had been sacked by Sir Francis Drake, described here as a pirate supported by the Queen of England, Elizabeth 1. He sailed into Baiona to capture Spanish gold and found the town unprotected, but a Spanish army was galvanised and fought back to recapture the town. In the fighting Drake burnt the church which was later rebuilt.

We met Bill and Irene in the bar and headed of for a drink and dinner. After last night’s blow out we were looking for something simpler but after strolling around we saw this gourmet gin bar that served Tapas. It was very trendy and we succumbed to the quirkiness. Anne was feeling all puffy from her cold still and didn’t want any photos so we chose to sit in what had been the fire place. She and I were somewhat concealed by the overhang of the mantle. We ordered fancy cocktails and mocktails which were quite delicious and a few tapas which were all so tasty. We ended up over budget again. Just as well we are getting our lunches free at this hotel!

That night we slept well in our new room insulated from the street and overlooking a skywell-no view. Irene said she had heard us laughing because they are above us and face towards the sea but overlook the lightwell too.