What a day! We went from dry to wet all day. Leaving the hotel we were engulfed in a downpour of such ferocity the rain was horizontal. By the time we arrived at the ferry it had passed and while waiting we met a Canadian couple from near Niagara Falls. We shared our common dislike of the cobblestones that have beset us all. I met an Irish guy, Colin later in the day and he called them the hobblestones!

The ferry crossing was uneventful despite the blustery weather. The Minho river is very wide here and there were about 28 pilgrims aboard who seemed to disperse quickly once we landed at A Guarda. It never fails to surprise me how a group of pilgrims can seem to disappear in such a short time. We have started to see some familiar faces now and some are also on the Portugal Green walks organised tours. Because everyone customises the walk we seem to stay at some of the same places or walk different distances.

We soon found a coffee stop for our first Spanish break and after Irene and Anne set off first. Bill and I were still getting organised when another deluge caught us unaware. I made a dash for cover to get my poncho on but missed the arrows. Soon I heard this high pitched whistle and it was Irene trying to get my attention before I went too far. Thanks to Kim who had given her the whistle. I rejoined them just when the lightening and hail started. We sheltered in a doorway for the worst of it to pass and set off again. We seemed to go in a complete circle but it gave Anne and I time to find a church for our candle lighting ritual.

More rain then blazing sunshine. After very clear markings we lost the arrows but continued towards the beach. As we emerged from our street we saw a whole posse of pilgrims stream past. We wondered what route they had taken because we haven’t seen any for at least 15 minutes. These were in fact a new group we think started in A Guarda, perhaps a parish pilgrimage. They were of all ages and in high spirits and crowded the path. Anne and I took to the road to pass them but the group engulfed Irene and in her attempt to get out of the group she slipped on wet boardwalk and tumbled down, grazing her arm. We all eventually overtook them and looking back they seemed like a group of zombies after us!

From A Guarda we were on rugged, rocky coastline buffeted by showers, hail and intermittent sunshine. It was quite invigorating but we eventually started to feel cold. In our haste to bypass the Zombies we forgot to stock up on lunch and were contemplating a day of sesame snacks and mixed nuts! We were flagging when we happened on a pop up cafe. An enterprising young lad had converted a container to a shop and added a dome tent for seating and shelter. He offered tortillas, bocadillas, cakes and coffee. It was like an oasis( but no toilet). He sold us lunch with a minimum of words and us pointing to what we wanted. Three? All? €12. He had a captive market and when it was quiet he watched TV or played video games. Soon other pilgrims streamed in and the tent was crowded.

We arrived soon after at Oia. We had met Colin the Irish guy from Donegal who was walking in shorts and sandals and I had enjoyed talking about his walks in England. He was continuing on to Mougás so we wished him Buen Camino and parted ways. We went in search of our hotel and just as we found it we were drenched by another burst of rain. 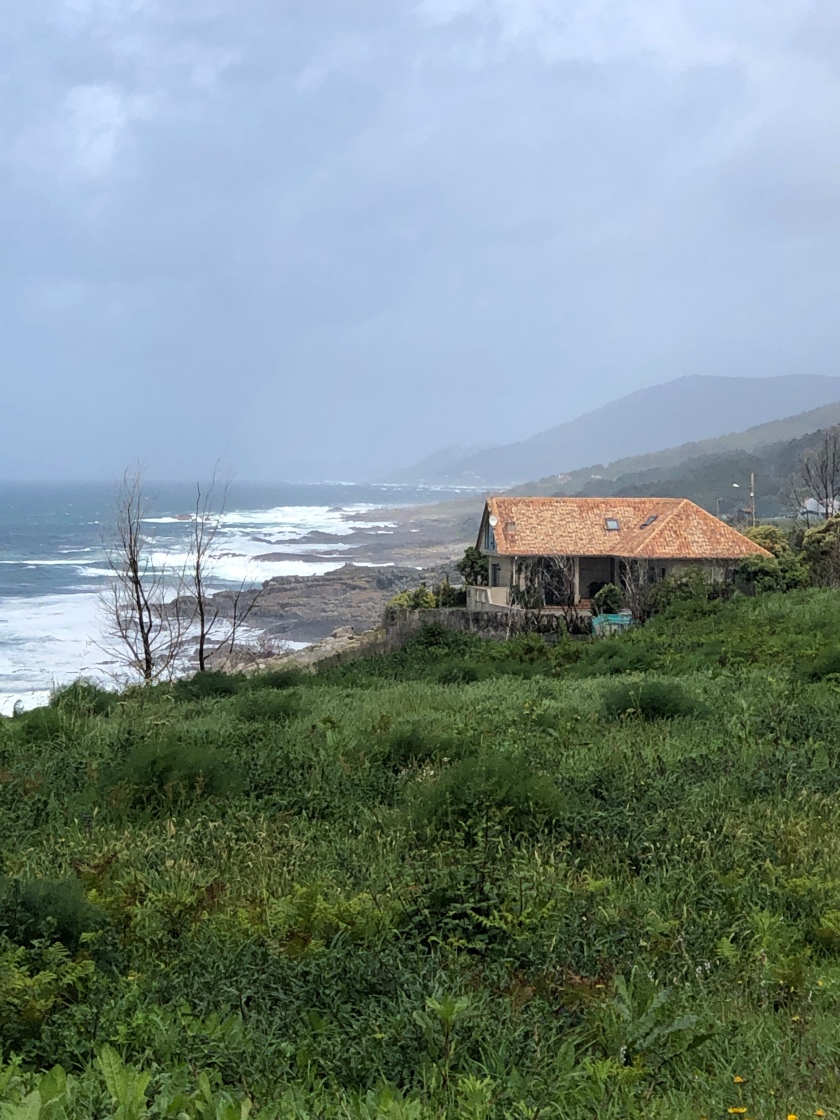 The private monastery of Santa Maria la Real is a 12 Century Romanesque origins are behind a Baroque facade from the 18 th Centipury.

Oia is only tiny and very exposed to ocean breezes. The wind was blowing so hard you could hear the whistle and howl around the windows of the hotel. Our host at the hotel Raiña was deaf. He used the phone to communicate with us quite efficiently. By the time we got settled we were all cold. Fortunately we had good heating and managed to dry everything overnight. We had a pilgrim menu because we couldn’t bear to go out in the weather again. The waitress was also deaf and with hand signals and lip reading we all managed to get what we wanted for dinner. It was a simple but tasty meal though the wine was a bit fizzy!

We were all happy to go to bed!