Queues and queues today. Bill has finally decided he cannot walk the Camino and will have to ride a bike instead. It is not unusual to do that but we are faced with the dilemma of getting a bike. Hiring one is very expensive apparently so we went searching for a reasonably priced new or second hand one. We checked out a sport store like Rebel at home but Bill thought the bikes were a bit pricey so we found a Cash Converters and he managed to get a bike and helmet for €92.50. He then bought a bike repair kit, pump and lock. All set. We did see a wheel chair that we said we could push him in. We would be sure to lose a few extra kilos then! He wasn’t amused. We returned to the flat and managed to get Bill and the bike in the lift only to have it go up to the fourth floor instead of the first. We ran up the stairs to try to call the lift back and eventually he stopped at our floor and we extricated him from the lift.

That task accomplished we set off for the famous book shop Livaria Lello which is considered one of the most beautiful in the world and which served as a model for the Harry Potter books. Apparently, J.K.Rowling lived in Porto for some time and used to go and sit in this book shop having coffee and reading. When we arrived we were shocked to see the queue snaking halfway down the street! We decided to go tomorrow REALLY early instead. Now we had the tower in our sights. 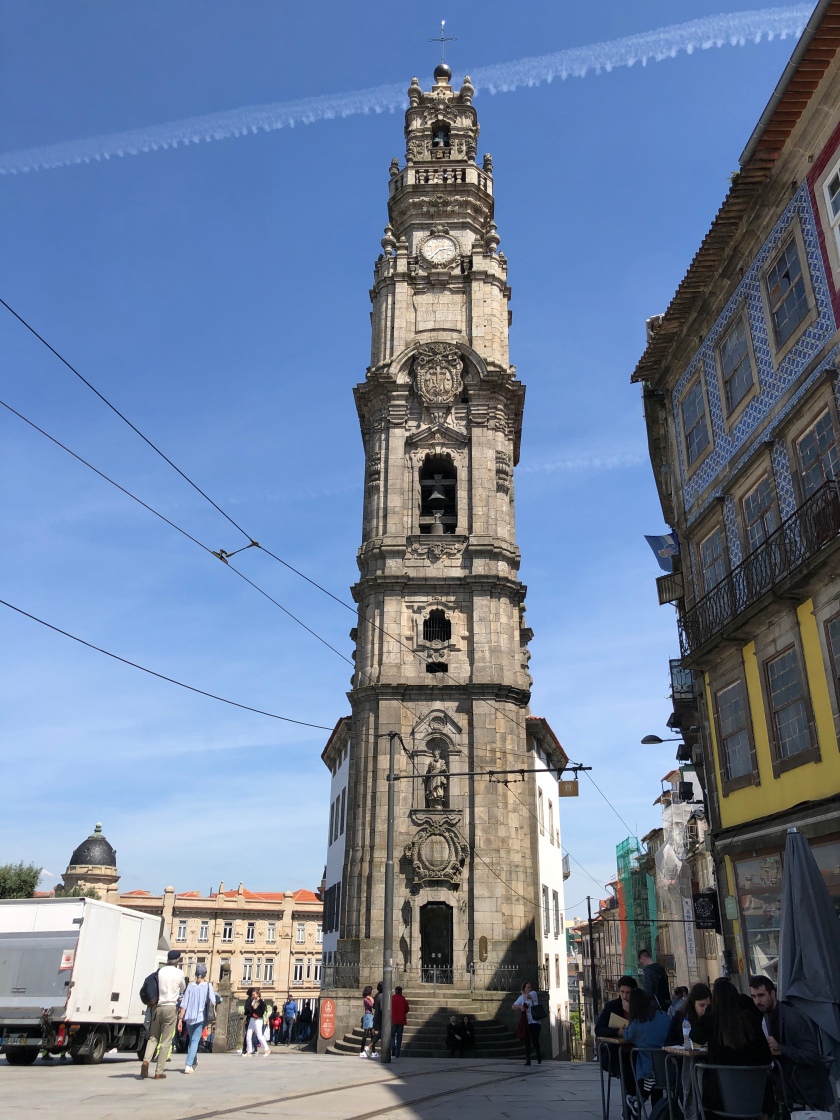 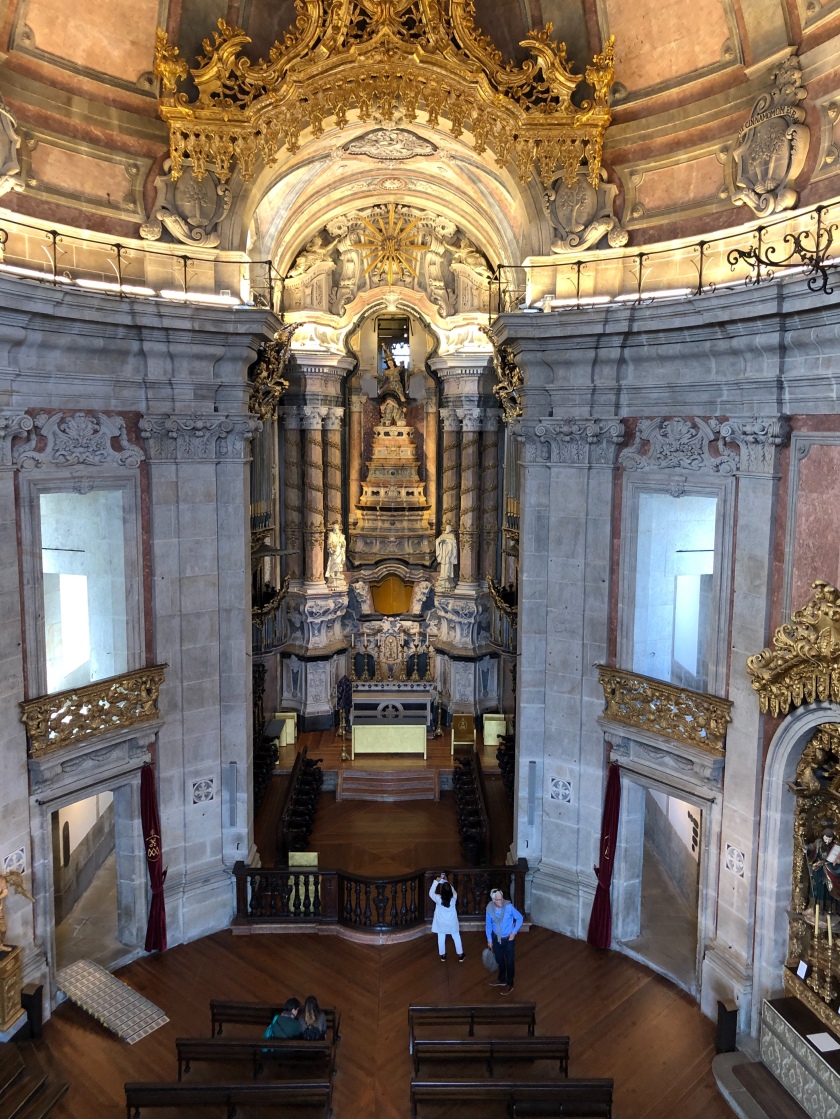 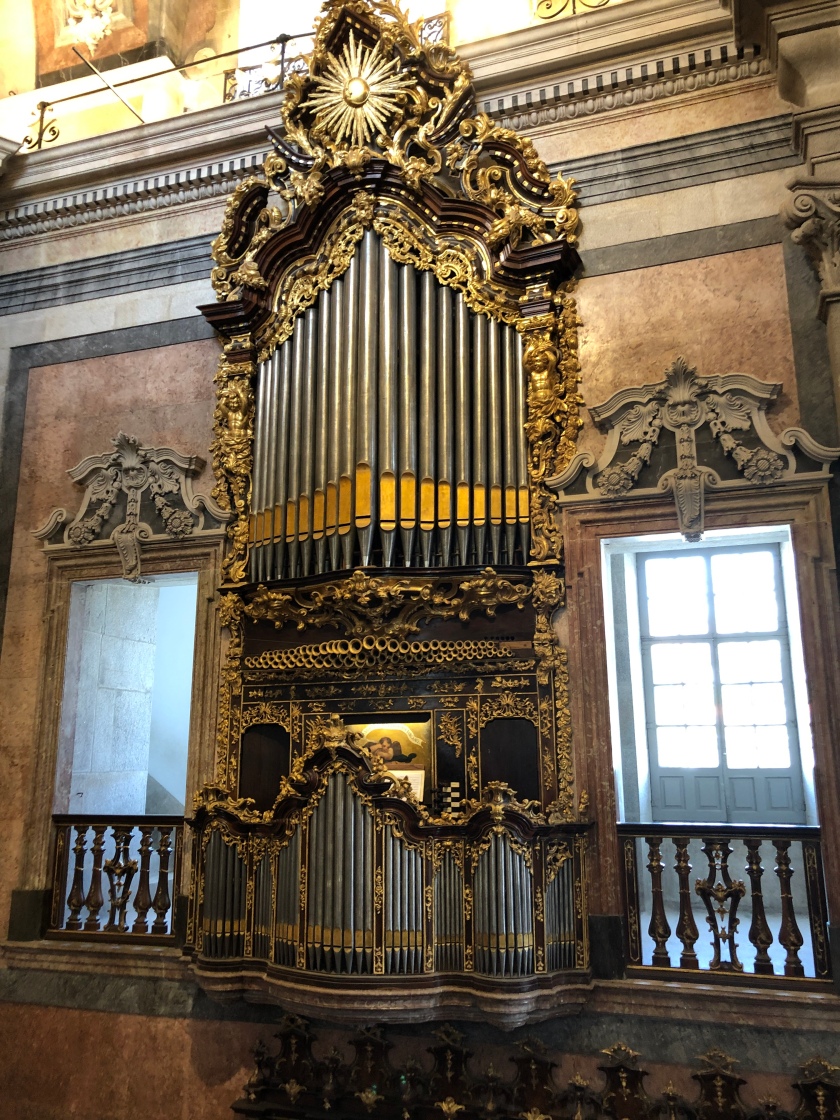 The Torre and Igreja dos Clerigos was built in the 18th Century and is still one of the tallest buildings in Portugal. It is only 75 metres tall but on a hill and affords fantastic views all over Porto. You can even see to the ocean. There are 240 steps and our queue didn’t seem too bad until we actually got inside and up to the tower. To get there you pass around and through the Church which had a live organist playing Bach. It was pretty spectacular to hear the music surging around the church. Then we had to wait in an ante-room while they let a certain number of visitors up and down at a time. It wasn’t until we started climbing did we realise how narrow the stairs were and how crowded it was. By the time we reached the top it was body press! The narrow winding staircase was a squeeze if you were going up or coming down. The views were great. You could see to the ocean but there were so many people it was hard to take photos.

Irene had diverted to a China shop and in the end we missed her completely. When we finally escaped from the tower we waited for her in a cafe until we decided she had gone off on her own. Bill was anxious but she didn’t have a useable phone so we couldn’t ring. While we waited we had a Portuguese experience of codfish and cheese balls and port! They were quite delicious. We set about making plans to keep visiting the sites when my phone rang. It was Irene. She had gone off and got a local sim so she could call us and we made plans for a rendezvous down at the river. Bill greeted her like he hadn’t seen her for days. It was very sweet. She had waited for ages and saw a few people come out quickly and had concluded she had missed us somehow. She then went to lunch herself. We had failed to make a plan if we got separated! All ended well and we took a river Taxi across to Vila Nova de Gaia. 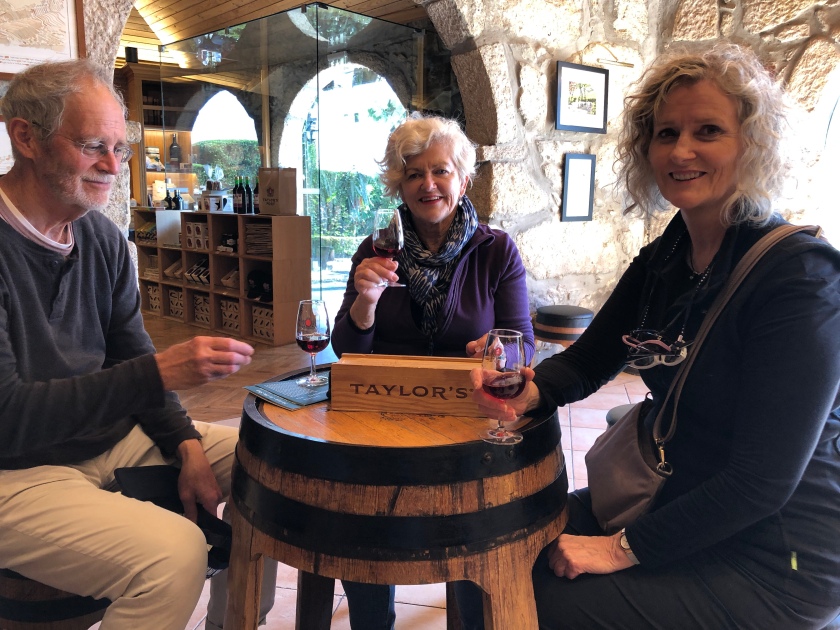 This independent town was originally in competition with Porto for the port trade. They had a completely different political government but are now part of Porto. There are many port cellars there and we had seen an advertisement that offered 10% off a port if we presented the map. After walking up the hill amidst winding cobbled streets we found Taylor’s, an old English firm and presented our maps only to be told we had to do the port tour first which cost €15 each! We declined and settled for a 20 year old tawny. It has a great view of the city of Porto from this side. The house look like toys!

Next we took the sky rail up to the fort. This is an actual army barracks and has been since the English Duke of Wellington and Napoleon both stationed troops there at different times. The English helped drive Napoleon’s troops out of Porto. While we were exploring the church and cloisters of the Fort we were shepherded by soldiers. The church is unique because it is round and so are the cloisters. The design was based on theories related to the solar system and the two circles of church and cloister were symbolic of unity with God. The Alter is in the circle but in a side chapel there was the alter of seven steps to perfection. We had wondered about this design. 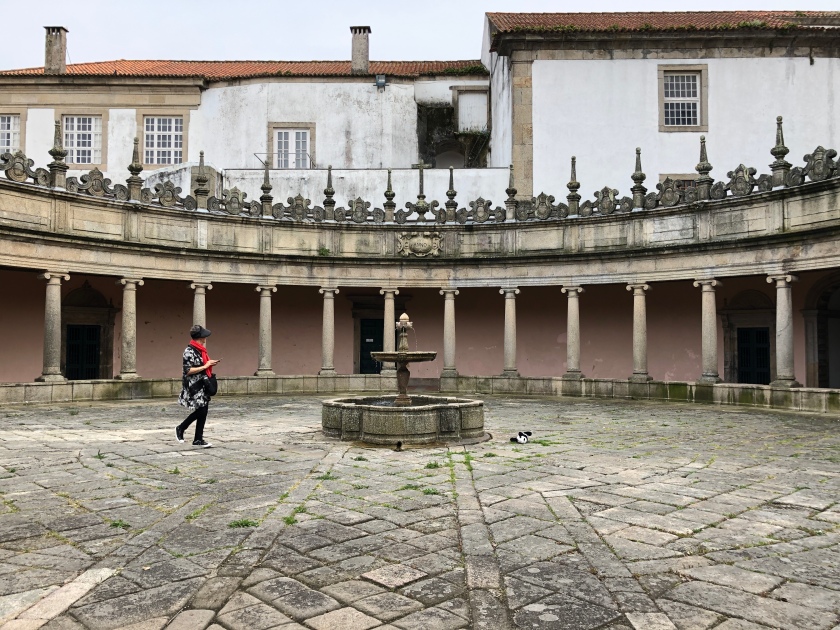 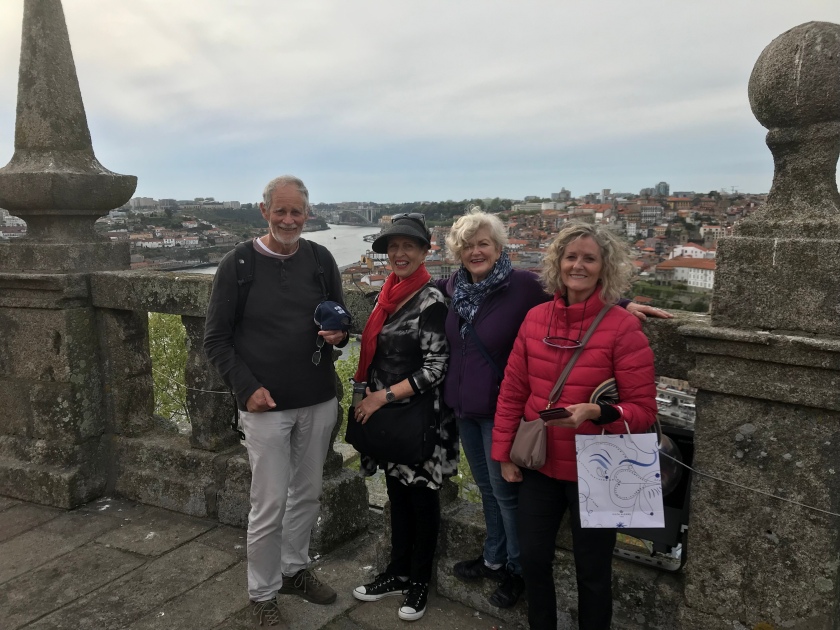 Walking the iron bridge was our last experience and by now it had started to rain. We had been lucky up to now. On the way home we passed a little restaurant near our apartment and bolted in to eat. They were so friendly and warm with a lot of home cooked food. I had an octopus flower which was so tender. All our meals were great and the service was so happy and attentive. We loved it.