This morning we needed to be down stairs with our bags by 8.50 am ready for our trip to Rabat and Chechaouen. It was a fabulous breakfast spread but also buzzing with people. Anne and I had come down a little late so it was a scramble to get and choose our breakfast. I tried a type of Moroccon porridge with semolina and delicious soft crumpets with beautiful honey as well as a couple of pastries and fruit.

When we saw the car- 8 seat Mercedes people mover- Ross and Irene were not happy. Ross thought it was too small and the passenger seats faced each other which meant some people were facing backwards to the direction of travel. The driver could not change the seats at that time so we all hopped in and made the best of it. Poor Ridouane was embarrassed but spoke with the company to organise a replacement immediately. However we needed that car so we set off for Rabat which has a very imposing entrance through the Windy Gate that is part of the old wall around the city. When we stopped for a coffee break we went to a charming and elegant cafe where Irene and Anne elected to have mint tea. It was very sweet and served in a traditional teapot. 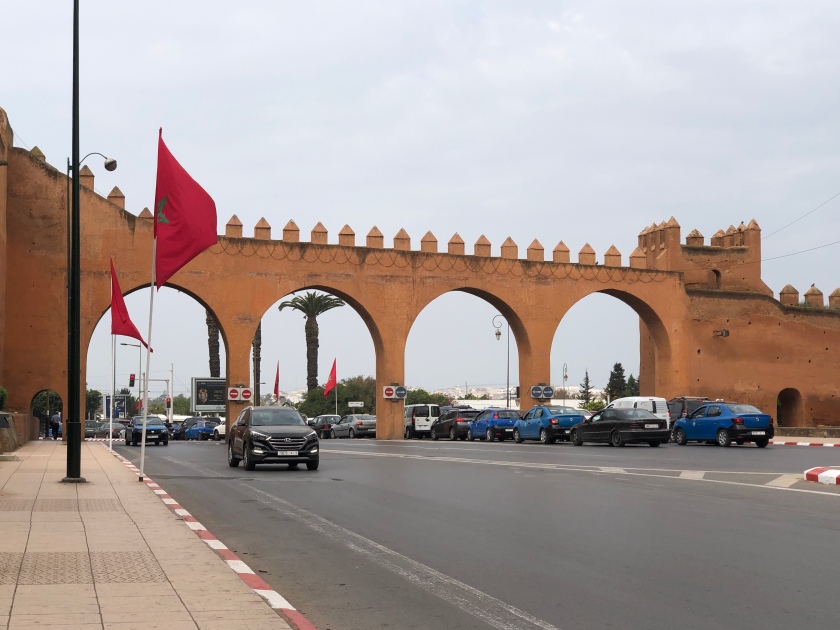 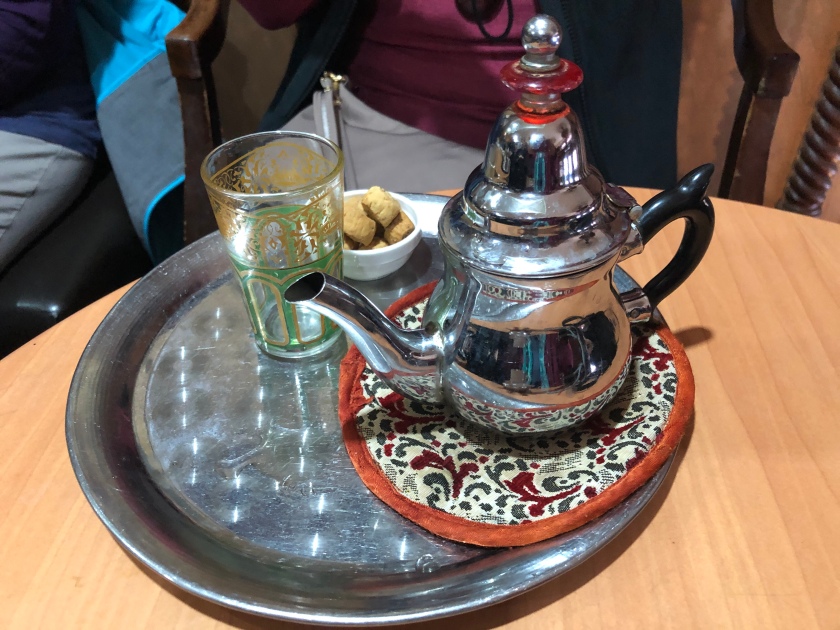 Refreshed now, and seating adjusted to all face forward, we went off to the Casbah. This is a fortification above the river and beside the beach was built by the French. It had beautiful gardens and also enclosed a Medina ( a village of artisans and quaint residences). The village used blue on many of the doors and walls and had winding cobbled lanes. 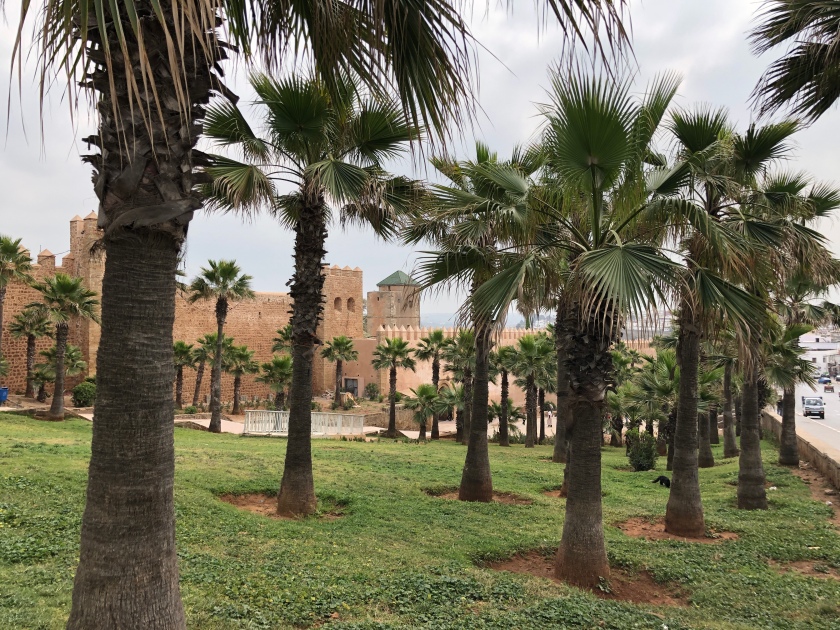 The garden of the Casbah was fragrant with orange blossom from orange trees and there were many cats basking in the sun. In fact there are lots of cats everywhere. 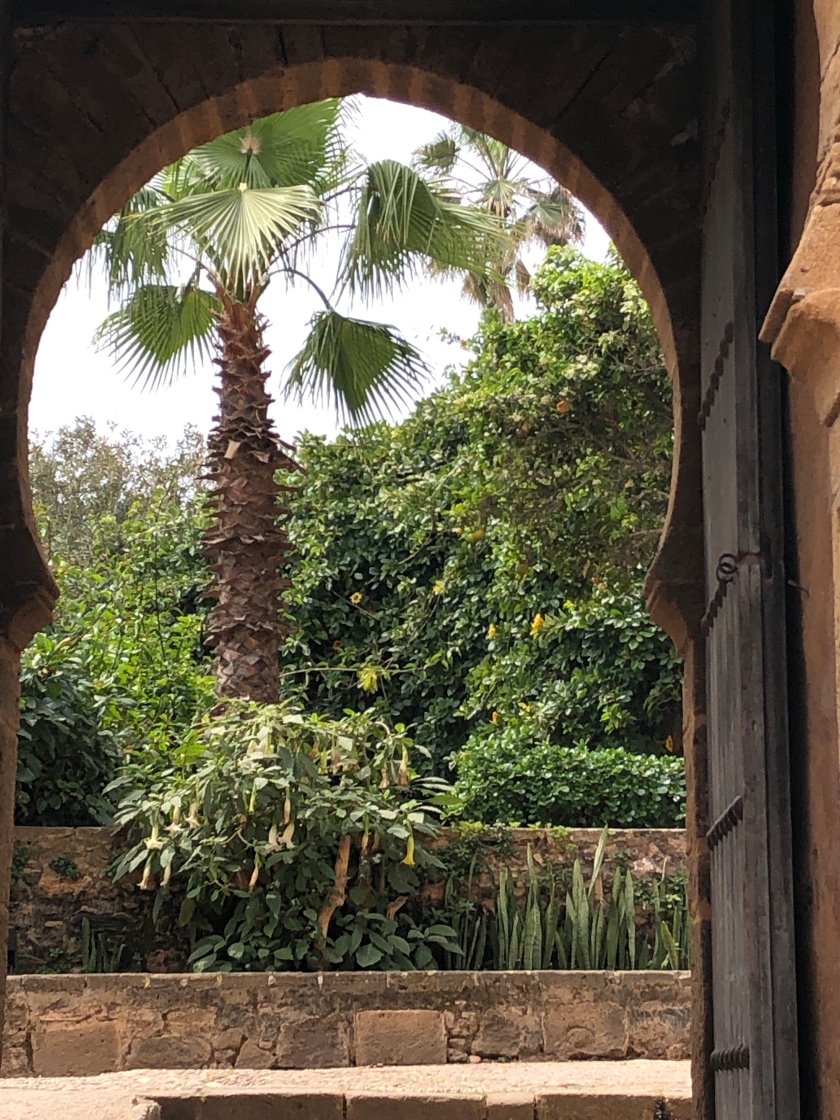 From here we went to the kings mausoleum and the unfinished mosque that is guarded by two soldiers on horses. The guards sit atop the horses while the horses stand for one hour. Ridouane said this is a new procedure because previously they were not relieved until thy completed a four hour shift. What agony for man and horse.

We then went off to a restaurant overlooking the sea near the lighthouse. Our lunch was simple but tasty and we were all starving. A quick trip to the ceremonial palace and we were in our way to Chechouan – the blue city.

The guy in white is the message man. All documents or important messages are delivered in person to the king. No emails! The different coloured uniforms represent different types of police force, with the men in red the palace police. Inside the palace grounds is a mosque and a humble village where all the staff live who maintain the grounds, or work in the palace etc.

It was a long drive of five hours to Chechaouen and we passed through the main agricultural areas. We were surprised to see so many farmers with donkeys and carts, as well as horses pulling ploughs and many farm labour using hand tools like scythes. We were also amused by the men in jellabbas which are long gowns with pointed hoods. The looked like wizards.

It was hard to take photos while car was whizzing past so fast!

The last part of the drive was a very winding road over the Riff mountains. I started to feel car sick towards the end but managed to last till the Riad accommodation. We were all very tired and only had a quick wash before going to dinner at 9.00 pm! I couldn’t eat anything but strawberries in honey because i felt my stomach churn even at the aroma of my vegetable tagine. We are still coming to grips with tipping in dirhams and each time we agonise over the appropriate amount. Ridouane suggested a kitty to manage it although Ross and Mary are doing their own thing. A very big day.