We had to do a presentation to class on the national dish of our countries, the best and the worst dishes. I had prepared a spiel on Vegemite, Roast Lamb and vegetables followed by Pavlova for dessert. I showed them laminations and BBQ sausage in bread. I also talked about Kangaroo, Emu and Barramundi which impressed everyone. Especially Timbault from Russia. I finished with the worst being Chiko Roll and also Vegemite because it is an acquired taste! My finale was the Vegemite jingle which amused and possible confused everyone! Thanks to Lyn, I have a tube of Vegemite and so I spread it on fresh baguette and gave everyone a taste test. About fifty percent liked it and fifty percent were unimpressed. I think it was quite a successful presentation. My French improves when I have time to prepare what I need to say, not surprising(!) but I was able to answer most questions in French too.

Following class I went for a celebratory lunch with Merel, my young Dutch friend. She is more competent in French but lacks confidence. We had a lovely lunch of Squid and risotto with chorizo but no wine because I had an individual class in the afternoon. The waiter was really slow coming so I had to pelt back to class at the opposite end of town arriving a couple of minutes late, all in a lather of perspiration. Marine my tutor is a gorgeous looking woman who seemed incredibly and uncannily familiar to me. I had not met her before I am sure.

After a halting start as I gathered my wits, it all went well and I think one on one sessions at home would be helpful. I was really boosted by her comments that my grasp of grammar was at least A2 level (I am actually in A1 here) so I ‘just’ (!) need to work on speaking and vocabulary. No surprise there. When I told her she looked familiar to me she said she had the same feeling about me. Quite weird. I feel very comfortable in France despite not speaking the language so I think I must have been here in a past life!?

Now I had some time to visit the Church of Notre Dame and light a candle for Peter. It has been 9 years today since he died. From all the kind thoughts I received he is still very present in all our lives. The church is quite unusual baroque style and had the most peaceful ambience. It was a beautiful interlude.

I decided that I just couldn’t bear another day with my mop of overgrown hair so I had booked and appointment at a salon around the corner from the school. The guy who took the booking had one of those long beards all the trendy’s are sporting back home. Anyway he was very pleasant and set me up with a delightful young woman who fortunately spoke quite good English, though I had prepared with Marine what to say. The hairdresser did a great job and the guy with the beard came over to tell me what great hair I had.

I felt revived and so I also lashed out at a little boutique ( good sale!) for some nice white jeans and a rather gorgeous striped linen top. I have been so restrained when there are sales galore and I am quite tired of my limited wardrobe, but in all honesty I really haven’t felt like shopping at all. It is really hot here and my dressier clothes ( two pair of non hiking pants and three smarter t shirts) are not cool enough.

I wandered around the city checking out little streets and found two arcades like the Royal Arcade in Melbourne. 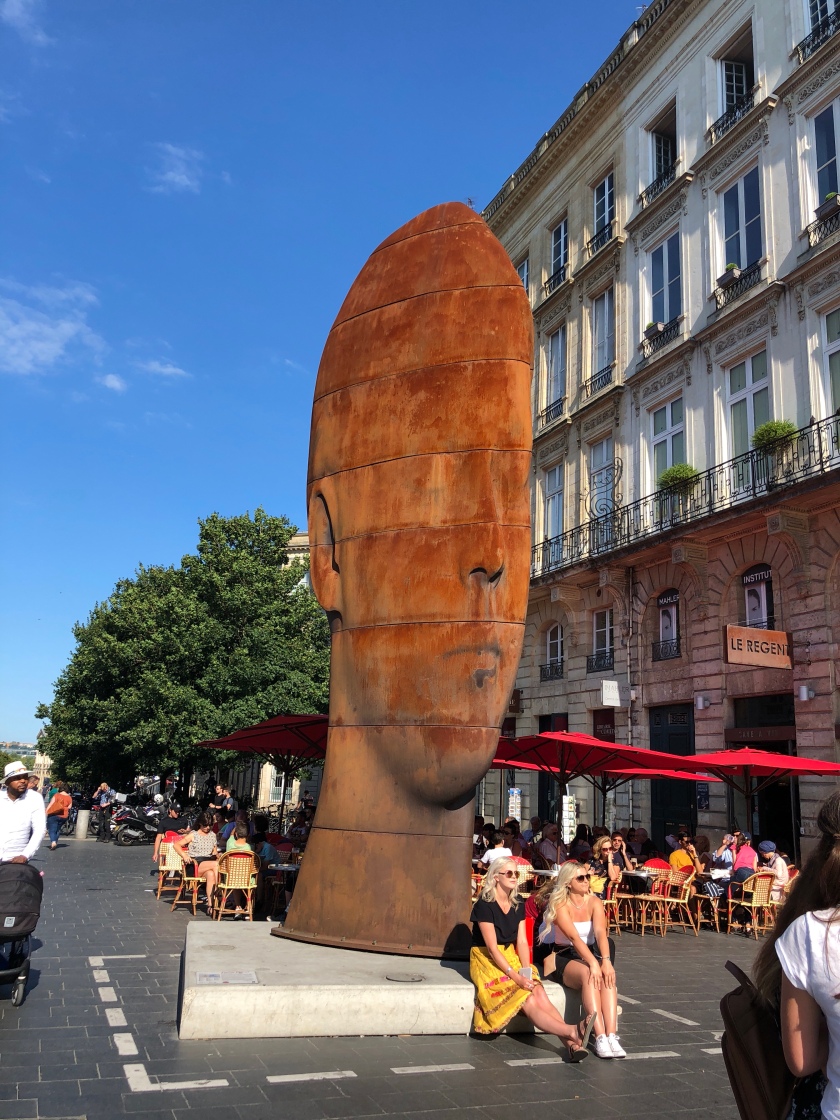 I was also looking for a new butter knife for my hostess Astrid because the one she loaned me was still in the bag of bread when I dumped it after class. I found one at Galleries Lafayette that was red and white like her kitchen. I was served by the most attractive young French African guy with a green tinge on the top of his head. He was so tall ( well over 6 feet) I felt like a child beside him but he was so delightful and we had a good chat. He is a student working there over the summer. I just wanted to give him a big hug.

I arrived home just in time for dinner and then we were treated to a small concert by Hermine as she played the harp. I am convinced that the music is enchanted. The tone and reverberation was so beautiful. In contrast and in deference to my English connections, the family watched the soccer game between Croatia and England. I was tired but it would have been impolite to leave. It was quite exciting in the end though disappointing for England.

Hermine is at the end in the white striped shirt. On the left is Alexandra, the Spanish student and Henri the father. On the right is Rogatien, Astrid, the mother, and Ambroise. The older boys are away.

I still had homework to do and revise for a test the next day but I could only manage some of the exercises before I fell asleep. It was a great day. I really like this city.